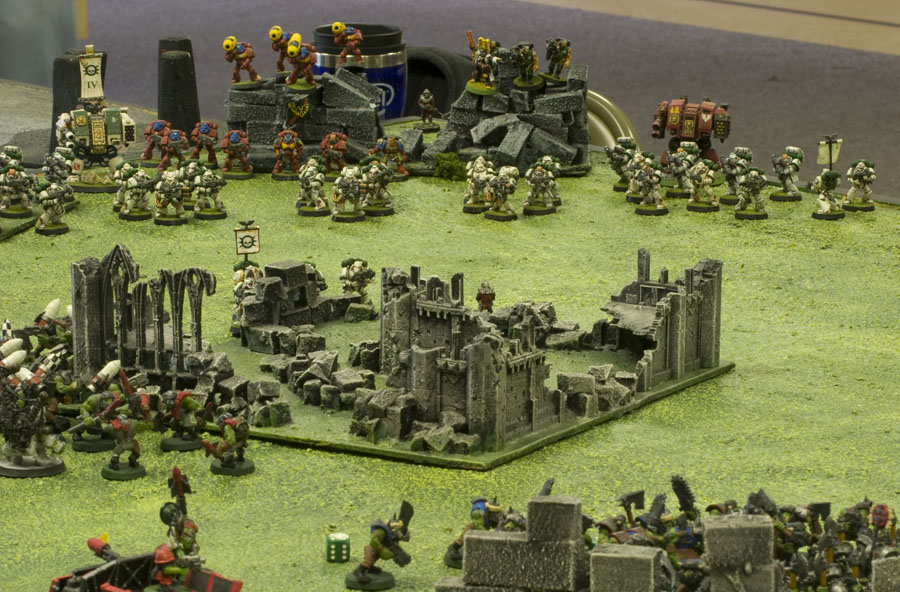 So you’ve seen some of the power builds that are out there on the tourney scene, and you start to think… this game is getting crazy! That was me three weeks ago as I was preparing to go to the local monthly “heavy-tourney”. Heavy means no comp, so I figured I had no chance.

I have a pretty big collection, but have such a love for the minis that I have a bit of everything, and rarely max out on any one thing like you commonly see in hardcore tourney lists. Still though I had a thought. I looked over the “unstoppable” units everyone was going on about as the game-changers of 5th. From Nob bikers, to CC termys, to Chaos Daemons, to Drop-poding marines, they all had one thing in common… they all paid lots of points for their ability to combine lethality with movement.

Then it came to me. I would not fight fire with fire, but with water. I would go waaaaaaaaaaaaay back to basics and build a list like you used to see back in 3rd edition. I would spend not a point on movement. I would hold my ground and blaze away at whatever nastiness poked its nose out towards me. It was time to bring the obsolete gunline out of retirement (with a few 5th edition tricks up its sleeve). Here is what I did……………

This army shoots A LOT. Your goal is good deployment, and efficient firing coordination. This is the the approximate deployment I use. The tac-squads will combat squad in non-killpoint missions. The flamer squads are completely expendable, and maueuver forward or back as dictated by the enemy to conserve their numbers, open fire lanes for the bulk of the army, and present assault speed bumbs to tie up enemies who get to close.

The key is the firing phase. Pick your targets carefully (remember to use your 8 targeters first to maximize your firepower) and once you commit, continue to lay it on until the target unit is destroyed, then move on. I prioritize fast transports, then standard transports, then jump infantry, then enemy firepower. You will take casualties from enemy fire, but dont get into a slugging match. You will have superior firepower, so knock out their ability to get to grips with you first, then kill their shooters at your leisure. This is one of the few armies that is quite capable of tabling a foe with shooting. Use that power well.

The Librarian’s null zone is broadly useful versus everything from daemons, to dark eldar witches, to terminators, so really go over all the other codices out there to see how useful it really is. If enemies finally break through the tac-squad defensive cordon, switch over to vortex and kill what you can before charging in if needed.

The rhinos always start in reserve to preserve their strength. They should beeline through holes in your lines and pick up any tac-squad survivors and head for any objectives at full speed late game.

~How did I do? 4th out of 16, agasint a variety of scary builds my first time out with the army not finely optimized. Not to bad for such an old fashoined list. Here’s hoping you guys have even better luck.