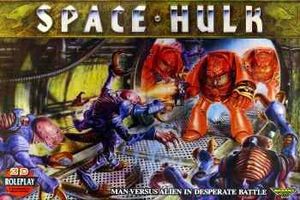 We’ve heard tidbits and hints of rumors in the previous months, but multiple sources are now reporting that Space Hulk is returning this year.

No details as of yet regarding the game’s scope, or contents, but keep your eye’s peeled in Q3 2009.

~With any luck, we will see some of the newer fancy “quick build” plastic termys, stealers, and who knows what else. It has been almost 20 years since Space Hulk was first released in 1989. I hope we are lucky enough to have a new generation of gamers walk in the the footsteps of the Blood Angels Master Michaelus Raphael as he faces his ultimate test in the space hulk Sin of Damnation.

I have to go way back to recall any game that was as fast paced, awesomely fun, and stress inducing all at once. Technology has come a long way for GW in the last 20 years. Who knows what they could stuff into a 21st century Space Hulk if they really went all out. Have at it guys, and I’d love to hear of some of your finest Space Hulk memories.