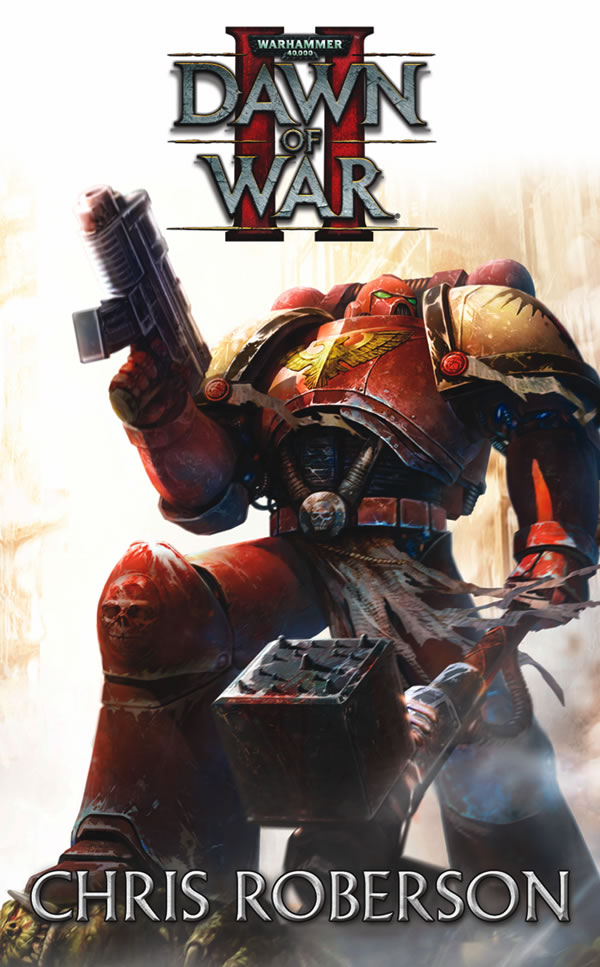 A book review by Timo

Books based on video games (Warhammer or otherwise) usually aren’t that promising but I am set on giving Chris Roberson’s book a fair chance and read this novel from front to back. I must admit, I didn’t manage to do this with the first Dawn of War Omnibus by C.S. Goto. That one I actually put down in boredom; this time, however, I will hang in there so I can give you a full report. Let’s get to it!

The book begins with a Space Marine operation on a Tyranid infested planet. Their mission is to safeguard relics before the planet is completely devoured. The majority of Space Marines in this unit die; but one of the survivors, Brother Aramus is promoted to the rank of sergeant. The book’s main character is born.

So far so good.

A delegation of Blood Ravens is underway on planet Calderis, trying to find new recruits for the Blood Trials. The planet’s Orks attack, refusing to stay on their side of the continent.

The aforementioned Space Marines from the relic safeguard operation arrive in the surrounded settlement on Calderis just in time. Similar to the scenario in Starship Troopers, the area is surrounded by aliens, Savage Orks piling their dead up into a kind of makeshift ramp in order to climb the walls.

The Seventh Assault Squad fights its way through the Orks in order to save a few refugees, encountering the book’s third level: there are “civilized Orks” behind the Savage Orcs.

Of course this is not the real threat in this novel; and of course, we can never imagine who that might be, since no fan of 40k ever watched the Dawn of War 2 trailer, right?

Believe me when I say that I fought my way through this book, level by level, and that is exactly the problem. The chapters seem to be written in levels with increasing degrees of difficulty, which really doesn’t disprove my instincts against novels about computer games.

In addition, the plot is extremely predictable, the Tyranids and the battles seem somewhat illogical and the constant descriptions of key Space Marines’ organs are redundant. It’s like describing the Space Marines to a newbie, trying to justify thier power.

It felt like I was reading the Disney version of a 40k novel the whole time.

A few questions popped up and bothered me until the end: The Space Marines find the tracks of an Eldar ship (How? Do they leave logos imprinted in the jungle?). Why are the Eldar mentioned in passing, then the topic is dropped? Is someone planning a sequel here?

Okay you guys and gals, if you’re thinking about giving this book to your 9 – 12 year old cousin that caught you working on your 40k miniatures and keeps asking questions, then I’ll give this book a 4 out of 5 stars.

If you’re considering reading this novel yourself, I’ll give it only a 2 out of 5, and only after comparing it to “Blood for the Blood God”