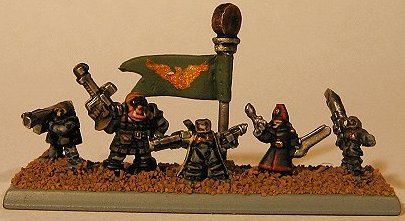 In various Specialist Games-related forums, you often see players decrying Games Workshop’s limited support for the many and varied Specialist Games. A case in point is the lack of 6mm-scale Necron and Tyranid armies for use with Epic:Armageddon, mentioned in an earlier post.

This situation was exacerbated recently when several popular Forge World Epic miniatures disappeared from the online store, such as the Tau, Grey Knight Terminators and Warhound Titans. Understandably, many members of the Epic community are more than a little annoyed by this–particularly since, to date, there has been no official communication from either FW or GW about what is going on.

My spies tell me the situation is that these Epic moulds require re-tooling, and FW is reviewing the financial viability of doing this, but official confirmation would be nice…hint hint, GW/FW!

As previously discussed in my series of posts, Epic:Armageddon is conceptually more complex than Warhammer 40,000 due to its higher level of abstraction. In my experience, younger players (under 15, say) who play 40K may not get Epic, as evidenced by the “What?? Devastators only carry missile launchers??” question I keep seeing posted around various forums (it’s an abstraction, guys–the missile launcher could be a lascannon). These younger players often bypass Epic in favour of 40K, which is of course fine for GW–so long as these players are buying 40K miniatures and rulebooks, its revenue stream remains secure.

There is a flip-side to this, however: the problem of retaining players as their gaming tastebuds change. I will use my own experience as an example.

Warhammer 40,000: Rogue Trader came out when I was about 14 years old, and myself and a mate of mine went nuts for it. We kept playing well into 2nd Edition, too, but he–always a gamer much more than a hobbyist or painter–eventually became frustrated by the tactical limitations of the game around age 20 and lost interest in 40K. Thankfully, he discovered Epic instead (then called Space Marine), and still plays Epic:Armageddon today–and I can even occasionally get him to play 40K.

The point of this story is that, if Epic had not been available as an alternative system, GW would have lost my mate as a revenue source–probably forever.

I think it is in GW’s interests to seek to retain maturing 40K players (the 20- and 30-somethings) who, like my friend, might be looking for something new by transitioning them into Epic–or Aeronautica Imperialis or Battlefleet Gothic (or Space Hulk, for that matter). The universe of the 41st Millennium is as compelling as it ever was; in my experience, it is the gaming system with which people tend to get fatigued.

If I was running GW, that would be part of my player retention strategy: a player looking for something different from 40K (as my friend eventually was) all too easily leaves tabletop gaming entirely, and then ceases to be a source of revenue for GW; whereas, if this player is introduced to an alternative GW system that meets his or her gaming needs, the player remains an on-going source of revenue via both–or even multiple–systems, and one that was cheaply won at that in marketing budget terms.

That’s just my 5 cents, of course. At the end of the day, I still get to play 40K and Epic. And Battlefleet Gothic. And Space Hulk. And Dawn of War 2. And Epic 40,000: Final Liberation (yes, I still play that old PC game from time to time–and it’s still awesome).

I call that a win-win (win-win-win-win) scenario.

~So what’s your take on Specialist Games guys? Important option for the veteran gamers, or useless appendage? What say you?