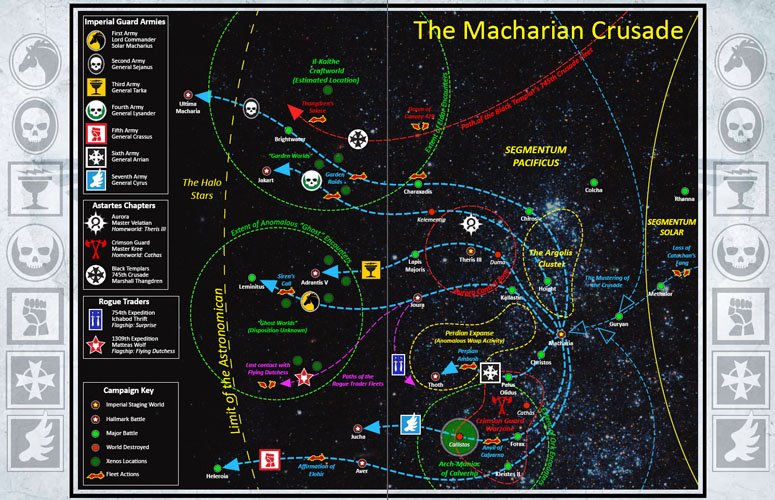 One of the things we really enjoy here at BoLS is diving into the fun-filled depths of narrative gaming. I know, I know… After reading Goatboy and Jwolf tell you how to vivisect enemy armies, you are saying “bigred, you’re pulling my leg” But I’m not, and believe it or not, when narrative campaign time comes around all the Fly Lords switch out our hats and enjoy nothing more than several weeks of fluffy non-hardcore armies plowing their way through a well crafted story. Winning a tournament is one thing, but walking in the footsteps of some of the greatest heroes (or villians) of the 40k universe offers rewards just as satisfying.

So the next question I often recieve is how to get a group of pickup gamers to introduce narrative gaming into their group. It seems like a big nebulous hassle and most players who would otherwise love the experience are often turned away from the get go.

With narrative play, the key is to start with something simple. Don’t go off and try to craft a crazy 130 page campaign book (like we do here at BoLS). Start with something like a set of 2 custom missions where the effects of the first mission slightly alter the second one. Have some fun inventing some cool narrative pairs of missions that allow your guys to reuse their army twice in the same night and get everyone’s feet wet with non-pickup games. Before you know it, your ideas will begin to build on each other, and you’re group will want to start making larger themed games than link into each other from week to week and you’re off to the races!

If you want even less record-keeping why not turn to p.263 of your rulebook guys and take a look at the veteran abilities table. One very simple way to “roleplay” your force is to keep a simple sheet of paper on the wall noting each of your player’s number of veteran abilities, alowing you to get a little feel for narrative play integrated into straight pickup-games. This simple system also gives both players a chance to have fun going over their game, and picking thier most memorable moments and awarding key units for their tabletop efforts (even if you lost). You might reset your veteran league after a month, or after the first person reaches some number of abilities, and start over.

A nice side-effect of campaign play, is you can set whatever house rules you want to get folks to not take really abusive armies and instead focus on having fun instead. I’ve found that once guys really get into fluffy narrative games and campaigns, that happens naturally anyway, as no one wants be the one who “brings the chainsaw to the wedding shower” and ruin everyone else’s fun.

~You can expect more of this narrative talk coming up, and with Mighty Empires out and Planetary Empires fast approaching, the time is rips for some-crafted campaigns. I’d love to hear of your narrative gaming experience, your thoughts on the concept in general. The floor is your gentlmen (and women).