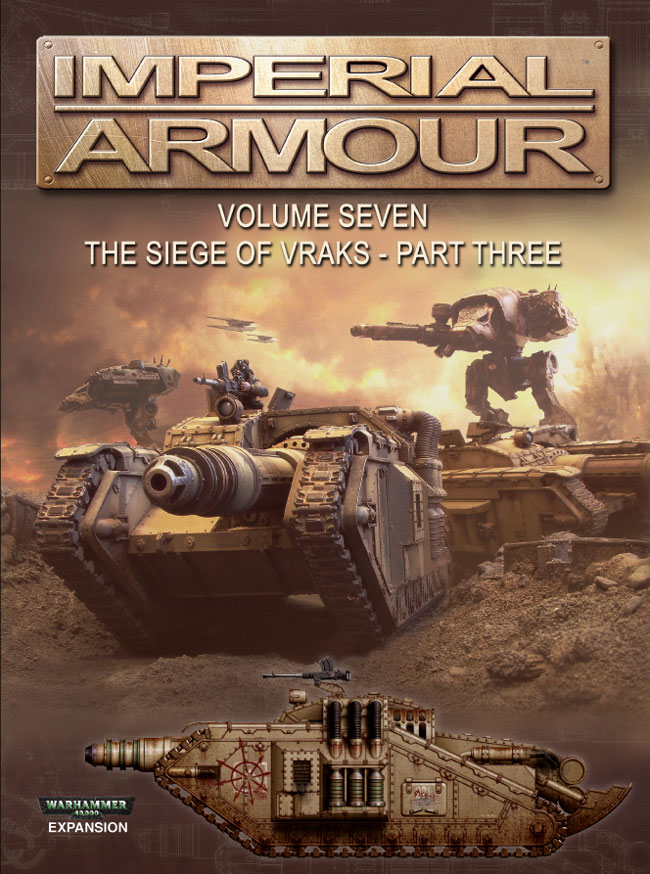 Today the eagerly awaited Siege of Vraks: Volume 3 went up for preorder, along with a new fancy Vraks Space Marine Decal Sheet.

Here is the description of the book, which comes in a oversized slipcover to hold all 3 volumes of the Siege of Vraks.

“The story of the book details the final climatic struggle to decide the fate of Vraks; as the forces of the feared Inquisitor Hector Rex and the Grey Knights add their weight to the battle in a desperate attempt to stem a rising tide of Daemons and the restless dead. Dark entities are summoned by the ceaseless bloodshed from the depths of the Warp to aid the forces of Chaos, and the hellish plans of their leader Lord Zhufor, master of the Skulltakers.

The book contains detailed background descriptions and rules for many vehicles and units including the Greater Brass Scorpion, Blight Drones, Blood Slaughterer, Chaos Reaver Titan, the Minotaur and the Valdor Tank Hunter, as well as characters and unique creatures and daemons such as Inquisitor Hector Rex, Lord Zhufor, Necrosius, Mammon, the Gorefeaster and others. It also contains two complete variant army lists; the Servants of Decay and the Krieg Armoured Battlegroup and eight new Apocalypse battle formations such as the Venatarii Titan Maniple and The Purge. It features colour scheme illustrations for numerous Chaos Warbands, the Grey Knights, Angels of Absolution and Red Hunter Space Marine Chapters as well as various war machines used in the epic conflict.” ~Forgeworld is also selling all 3 volumes of Vraks in the clipcover as a single item. Make sure to check out the cool interactive page samples from the new book, they are pretty cool! These items ship out the week of August 24.