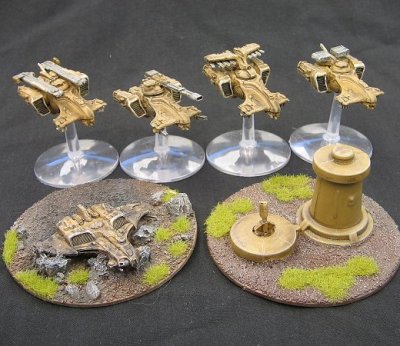 Sources say Forge World has informed them it is continuing its support for the Epic range of miniatures.

Several months ago, a rumour began circulating that Forge World was going to end its support for Epic when the business removed some of their more popular Epic miniatures from sale (notably, their excellent Tau models–shown above).

It was soon after clarified by Forge World that, due to wear and tear suffered by their Epic moulds, the business was performing a review of its entire Epic range, with a view to identifying those moulds that were not worth re-tooling.

This led to rampant conjecture that Forge World’s Epic support was coming to an end.

Thankfully, today sees this rumour being put to rest. My source tells me that “the majority of the Tau models, including the Railgun Hammerhead and their all their infantry sets” will be returning to sale in the near future. “Some items are already in the building, apparently. I’m most happy to find that the FW Grey Knight Terminators are coming back.”

As expected, following the Forge World review, certain miniatures will not be returning, such as the Ion Cannon Hammerheads and the Drone Turrets. Nonetheless, this is absolutely stellar news for all Warhammer 40,000 Epic-scale hobbyists.

~First Space Hulk is re-released, and now this?? It’s Christmas is August! This news will no doubt give a well-deserved morale boost to the Epic-playing community (ku dos to you for keeping the faith, brothers!). Could it be that the long-looked-for increase in support for Epic by Games Workshop is just around the corner? Do we dare dream The Impossible Dream…?