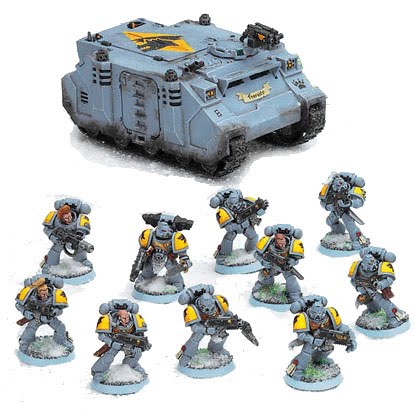 “Silver bullets or fire, that’s the only way to get rid of the damn things. They’re worse than cock-a-roaches.” – The Howling (1981)

If you are like me, you’ve been following the Space Wolves rumors – and they sound awesome – but you might be a bit skeptical. If all rumors were true, we’d have packed up our models when the Dark Angels rumors came out. But here’s what you want to know: What will a Space Wolves army look like? How will it play? And what can you expect to see across the table in 3 weeks or so? Well, let’s find those answer by building a 2,000 point Space Wolves army using the new codex and figuring out how it will play.

HQ: I can’t resist trying out one of the crazy-tough (but crazy-expensive) special characters. I chose Ragnar because War Howl and Insane Bravado are just too delicious. I need to see how Furious Charge and +D3 attacks on the charge (instead of +1) feels when I unleash it on my opponent, lol.

I chose the Rune Priest because Jaws of the World Wolf (basically a 24″ line that removes models that fail an Initiative test) is going put the fear of Fenris into just about every army (including those pesky Assault Terminators). And Storm Caller is still a great psychic power (Living Lightning looks pretty good too).

TROOPS: Space Wolves have a great foundation of Troops choices. Both Grey Hunters and Blood Claws are excellent choices in the new codex. They are the same price (which makes it easy to experiment with army builds), but play different roles.

I’m choising four units of Troops in my army. A 9-man squad of Grey Hunters in a Drop Pod, 10 Grey Hunters with 2 Meltaguns and a Wolf Guard buddy (which will ride in the Crusader) and two 10-man Blood Claws units in Rhinos.

ELITES: There are two Elites that I just have to work into the list. First, a Lone Wolf (an ambusher with a Beastslayer ability that gives him an edge against monstrous creatures) with Meltabombs. He’s going to be more useful (and way cheaper) than a Lictor in my opponent’s backfield. The second is a Wolf Scout Pack with Meltagun, Power Weapon and a Wolf Claw (extra close combat and a LD9) wielding Wolf Guard buddy. This gives me some choppy (and an extra BS4 Meltagun) that can come in on any board edge on a 3+. That’s going to keep my opponent guessing.

HEAVY: The Land Raider Crusader for Ragnar and friends is a must have. With the reduced transport capacity of Drop Pods and Land Raiders, there really isn’t a good place to squeeze in extra Wolf Guard and HQ. I’m taking TWO packs of Long Fangs. Each sport 3 heavy bolters and 2 lascannon (yes, that’s 5 heavy weapons!) and a Wolf Guard buddy as an extra wound. With Fire Control, these guys should be a menace.

Here’s the summary of the army list. If I did the math right (I prefer Army Builder to Excel), I’m just a few points shy of 2,000. So if I lose, I can blame the point difference instead of my generalship! 🙂

Okay, that’s out of the way. So let’s talk about how the army plays.

DEPLOYMENT: Deployment is pretty easy. You hold the Lone Wolf (using Pack of One; think Lictor), Wolf Scouts (using Behind Enemy lines), and the Grey Hunters (uing Drop Pod Assault) in Reserve. You place the Long Fangs in cover (with a decent line of fire for Fire Control). You put Ragnar, the Rune Priest and the Grey Hunters in the Land Raider Crusader and deploy it as far forward as possible. You flank it (or screen it, if necessary) with your Rhinos (containing your Blood Claws).

TACTICS: As I mentioned on the Flywire, this is “easy-peasy, lemon squeezy” army. You ram your Land Raider Crusader down your opponent’s throat. While it’s crossing the board, you bring in your reserves in a place that can support Ragnar and use your long-range shooting to deal with anything that can hurt Ragnar, etc. The key is to have some fleshy bodies ready for the Ragnar “all-you-can-eat buffet”.

Oh yes, Ragnar and his friends will kill anything they charge. If everyone gets there intact, you are looking at close to 60 attacks on the charge (and these are pretty darn good attacks). I’ll have to do the math, but we’re talking Dante + Death Company numbers here.

NOTES: You’ll notice that I have a decent number of Grey Hunters in the army. Why, you ask? Because they are awesome now! With a full set of equipment (Bolter, Bolt Pistol, Close Combat Weapon and Frag/Krak Grenades) and awesome special rules (Acute Senses, Counter-attack and ATSKNF), I have to agree with JWolf that they are now the best troops choice in the game.

You’ll also notice the two Long Fangs squads (historically a terrible choice). Well, not so much anymore. They are dirt cheap and with the horrifying advance of Rangar, the Rhinos, the Drop Pod and the ambushering Lone Wolf (master-crafted meltabombs??), your opponent just won’t have time to shoot at them.

I suspect this is going to be pretty typical of a Space Wolves army. You’ll see mostly mechanized armies (Rhinos and/or Drop Pods with a Land Raider variant with a tough unit inside) with a couple of ambushers (Wolf Scout Packs are going to be in every army and Lone Wolves are going to be common). Long Fang Packs are cheap and effective, so most players will take one or two.

HQ will vary from army-to-army, but will have fewer special characters than Space Marines and Imperial Guard (they are REALLY pricey). Rune Priests are going to ubiquitous – and a real problem for psyker heavy armies (negate psychic power on a 4+ instead of a contested roll) and eggs-in-one-basket armies (Jaws of the World Wolf is the final nail in the Nob Biker coffin and is going to take the wind out of the Assault Terminator sail).

There’s some cool stuff, like Thunderwolf Cavalry, Swiftclaw Biker Packs and Fenrisian Wolf Packs, but they are generally too expensive or not quite as effective as more Grey Hunters, so I don’t expect them to be staples in a Space Wolves army.

So get ready for it.

~ All in all, I’m in love with the Space Wolves codex. GW managed to build a great army list and retain the character we all loved from the old one. I’m going to try to get a game (or two) in tonight using the above army list. I’ll post in the Lounge and let you know how it goes!