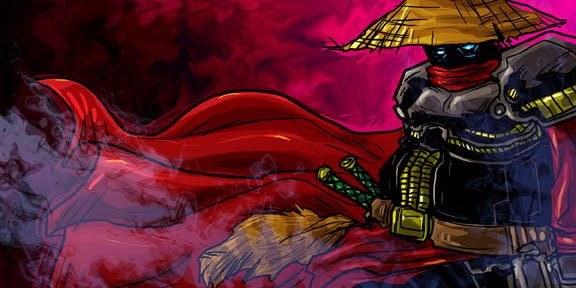 After playing in the local game store’s yearly invitational not too long ago, I got thinking about the other players involved.  Specifically their individual styles and more specifically, how they would related to different types of real life warriors.  I thought about the tools the warriors would use, their position in society, as well as the personalities they expressed.  I narrowed the field to 5 different options. The Ninja are masters of the art of the kill.  Every aspect of their play exists only for that purpose.  Even their army construction and design is built for this reason.  They will take every tiny advantage and bend every rule to their whims.  In some cases, even army creation (building and painting) is influenced by this.  Ninja’s master every tool and often prefer to change armies every week.  Use new tools of the trade, sometimes out of boredom, sometimes to continue to hone their usually highly advanced skills, sometimes just to keep their opponents off guard.  They often keep only the most deadly weapons in their possession, choosing to discard or at least temporarily remove the less efficient methods of killing from their arsenal.  Glory for a Ninja is in the kill rather than the battle.  The Ninjas mastery of the killing arts are matched by only one other group…

The Samurai’s skills are usually second to none, but they rarely choose to go all out in a fight.  Often affected by a rather large ego, the Samurai believe they should not have to use every skill they possess to defeat an opponent.  They will size up an opponent and their army ahead of time and judge how much of their skill is required to do the job.  This bit of arrogance will sometimes cost the Samurai a victory.  The Samurai are also know for honing their martial skills with a particular weapon completely.  Usually to the point where an opponents arsenal is of no consequence to them, and they expect victory at all times.  Like the Ninja, they can see even tiny advantages on the battlefield, but a fairly strict code of honor will generally prevent them from bending the rules quite so much.  Samurai, like Ninja, are not always the most fun to play against outside of a tournament setting. The masterless Samurai.  Some of the are once great martial masters who have lost their way, either because of being away from the game for an extended period of time or occasionally because their weapon of choice has lost it’s edge.  Others simply became lax and dishonored themselves.  They tend to share many traits of both Samurai and the Ninja, but fit in neither class.   Many strive to become the mighty Samurai again, but most fall to the side of the Ninja as it is usually easier.  They live their games balanced on a knife edge. The Monk enjoys the beauty of every aspect of the game, usually in fairly equal proportion.  He has also pursued enhanced skills in every aspect of the game, not just for killing.  The Monk’s martial skills will never match that of the true fighting classes, but they can usually hold their own against most fighters.  Occasionally, the Monk will stumble upon a specific technique that excells, but it is usually by accident and the monk will not hold onto that technique for long.  Monk’s often require a constantly changing repertoire of styles, scenery, and techniques to keep it fresh.  You never know what a Monk might bring to the table.  Monks are usually attracted to the game by the game, rather than the outcome.  This is the class I think of myself as belonging to. The artist is called to the game by the ascetics rather than the game play.  They often choose to play only to pass the time, or sometimes not at all.  Their skills are often sought after by the warrior class to craft them weapons of real beauty.  Artists are generally content in their place in warrior society and choose to live away from the bloodshed of battle.  They live for the excitement of beauty rather than the thrill of war.  They are often the aristocrats of gaming society.

~Of course many players will find themselves sharing parts of more than one class, however I think most of us can identify with one primary class.  Are there any others I’ve missed?  Where do you see yourself fitting?