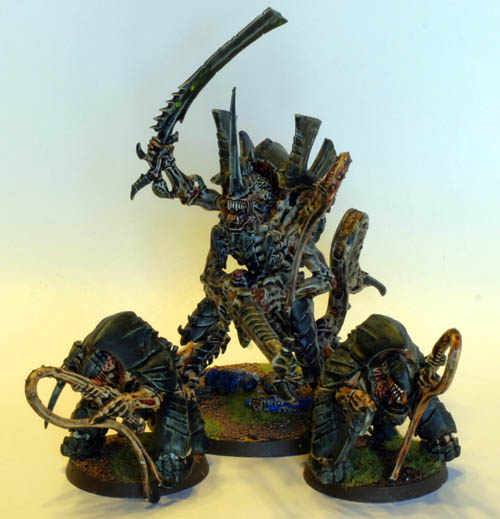 So by now all most of us are pretty familiar with the Tyranid codex.  We’ve seen the rumors, then the reality of the codex splash upon the gaming community’s shores and are now adapting to our new bug neighbors.

But there are couple of questions that are still not quite nailed down.  The dreaded Doom of Malan’Tai presents us with one of the codex’s most intrigueing mysteries: the Spirit Leech special rule.

Lets read the section of the rule to set up our rules query:

Spirit Leech: At the beginning of every Shooting phase, including the foe’s, every non-vehicle enemy unit within 6″ of the Doom of Malan’Tai must take a Leadership test on…

So the big question on everyone’s mind these days is does this effect embarked units?  Think carefully about this question, its not at all obvious at first glance.  The initial kneejerk response is “of course not, nothing can effect them”, but now in 5th we certainly have embarked units doing all kinds of active roles on the tabletop, from Farseer’s using powers out of them, to the old favorite double-melta rhino driveby.  This sets up the counter argument that it would seem odd for psykers and units within vehicles to be able to target the Doom of Malan’Tai, while not being subject to its own special rules. It also brings up the larger point of what exactly is the location of an embarked unit? We’ve been arguing this one back and forth, consulting the rulebook, codices, and faqs, and still found nothing clear.

~So what’s your take?  There is a  poll down below so go vote, and leave your thoughts and reasoning in the comments.  Who knows who might wander on by and read the community’s thoughs on this issue.