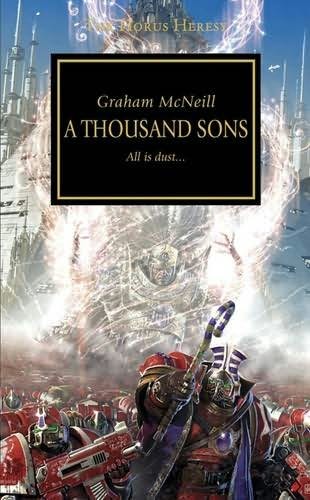 As the World Burns – A Thousand Sons Review

Clocking in at over 550 pages, Graham McNeil’s A Thousand Sons is a fitting tribute to the 15th Legion and their libraries of massive tomes. The book takes us from the later days of the Great Crusade, through the Council of Nikea/Trial of Magnus, and then to the devastation of Prospero. Because the book revolves around long-established, important events of the Horus Heresy, we are being treated to something that actually advances the story – unlike some other books in the series, which can feel like filler (I’m looking at you, Battle for the Abyss and Descent of Angels). Unfortunately, McNeil seems hesitant to approach the great war we’re all here to read about. Most of the first 400 pages are set-up, requiring a Magnus-like dedication to learning about the legion and the conflict. Perhaps fighting for room to actually be creative in a story that isn’t his, McNeil probably lingers too long on the events leading up to the Council of Nikea and (eventually) to the action.

As with other books in the series, A Thousand Sons assembles its cast from the legion’s senior leadership. The author uses Chief Librarian Ahzek Ahriman, a well-established member of the source material, as his main character. McNeil does this well, and gives us some great insights, letting us learn new things about him while still feeling like we’re dealing with someone we recognize. The Primarch Magnus has a greater presence than many other Primarchs have had in their books, and he’s more complicated and compelling than any of his brothers so far. Other big names play supporting roles, which weaves the story nicely into the ongoing narrative. Some supporting characters do feel a little tacked-on. In particular, the Remembrancers are hard to care about, and their relationship to the Astartes seems forced and distracting. As with many of the books, it sometimes feels like there are too many characters, each given too little to do.

As expected, Leman Russ and his legion play a prominent role as the loyalist opposition in the Space Wolves’ first real entry into the Horus Heresy series. Fans of the Wolves will not be disappointed – they’re portrayed with all the over-the-top ferocity and borderline psychosis you would expect. Others may be irritated – for a book about the sons of Magnus, we spend a lot of time reading about how dangerous the Wolves are. This is clearly done to hype the inevitable showdown, but it sometimes seems as if McNeil would rather be writing Prospero Burns.

So overall, A Thousand Sons could have been shorter and better focused, giving us more of the red meat we expect from a war story. But these failings are minor. For a book working within the constraints of pre-existing lore – and for readers who already know the story arc – it still manages to keep you turning pages. Readers will learn new details of both legions and come to a better understanding of the early days of the Heresy. Overall, fans of the Space Wolves, the Thousand Sons, and the Horus Heresy should be pleased – McNeil has given us a “must-read.”

So’s who’s read the book and what do you guys think.  Remember to mark spoilers in your comments.