40k Tactics: Art Of The Wraithlord 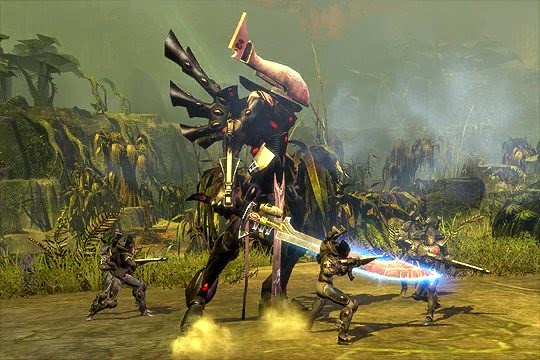 Fritz here with some ideas on one of my favorite Eldar models, and since foot ‘dar seems to be all the rage I thought I would offer my experience in running wraithlords in an Eldar army- the good, the bad, and the so-so.

The Basics
The main issue with Wraithlords is that they compete for a heavy slot with fire prisms. Fire prisms are cheaper which is especially important these days when running units from an overpriced codex, and unlike Wraithlords, ‘prisms can zoom in on turn five to contest objectives.

So what are the advantages to running a Wraithlord? Survivability. With the increase of cheap long range and high strength shots (think las/assault cannon razorback spam) deploying everywhere on the table, the WL has the advantage of not getting taken out by a single, perhaps luck, shot. Wraithlords also have the advantage of being able to shoot every turn that they are alive, unlike vehicles which can be shaken/stunned or get their weapon destroyed. WL’s are firepower that you can count on.

The first question is how many Wraithlords to take? Why three of course! One is an annoyance, three is a threat. WL’s are also slow in the world of mech, so three are needed to throw up a “net” to catch your opponent with, one can just be avoided and laughed at. Keep in mind that if you commit to three wraithlords that means no falcons or fire prisms- be prepared to adjust your list accordingly.

The Arming of Warithlords
Next the question is how to use that firepower- what kind of weapon load out?  Despite the points the well rounded combination of a missile launcher and brightlance is my first choice, and the scatter laser/ brightlance my second choice.

Although the lance is only one shot, more on that in a bit, and its range is limited to 36” it is both a threat to armor and monstrous creatures- especially Tyranid big bugs and their pathetic lack of an invulnerable save. Unless one is facing Black Templars the lance rule also tends to scare people- reducing AV 14 down to AV 12 is always fun. The missile launcher also gives you the range and flexability to engage both tanks and monstrous creatures, in addition to light infantry and pinning. The scatter laser comes in second, but because of its 36” range the missile launcher has an edge. Sadly my old favorite, the starcannon, has no place on a wraithlord, since WL’s don’t have the mobility like vypers to set up targets to engage them out in the open. As for the Wraithsword? Not worth it considering you have to give up a shoulder weapon, maybe if the WL had like 4+ attacks in close combat, and of course wrist flamers over shuriken catapults.

Battlefield Strategems
So now it’s time to put those wraithlords down on the table- what is the plan? Tactically WL’s have three uses to them- as a fire platform, as a speedbump unit, and as a counter assault unit. On the table you want to use them as all three throughout the game to get the most out of your points spent.

Since the WL’s are on foot, forget about chasing after your opponent- you are going to have to bring them to you through objective placement and mission setup. As a fire platform place objectives out in the open and in range of where your WL’s are going to be, or even better, behind where your WL’s are going to go down on the table. This is the key to using them- force your opponent to approach them, and then force them to go through them to get to objectives, or weaker units if the mission is kill points.

In the fire platform role you can expect your WL’s to take their share of las cannon and other long range shots so cover is going to be key, and the most difficult thing to get since the WL itself is a monstrous creature. That said, T8 in cover, and perhaps boosted by fortune really keep the WL’s up- they love Eldrad and Eldrad loves them.

Next, as your opponent approaches your ‘lords switch over to being a speed bump unit- once close enough they move out and assault the incoming units to tie them up for a turn or two. Winning combat is not the primary goal, although if it happens great, but rather burning a turn or two for the unit locked in the assault so the game can end, or you can bring up fresh units. Back to why you need three WL’s-so you can throw up a that net that your opponent can’t slip by- modified by the army they play of course.

Facing Chaos Daemon with hordes of plague bearers coming in I’ve set up my WL’s by castling them in the corner- if my opponent wants to get to my squishy T3 units they have to move into the speedbump/counter assault range of my wraithlords.

So that’s a quick intro to how I’m using Wraithlords and in the next part we are going to take a look at how WL’s work together with both Harlequins, and Storm Guardians…Fritz out.