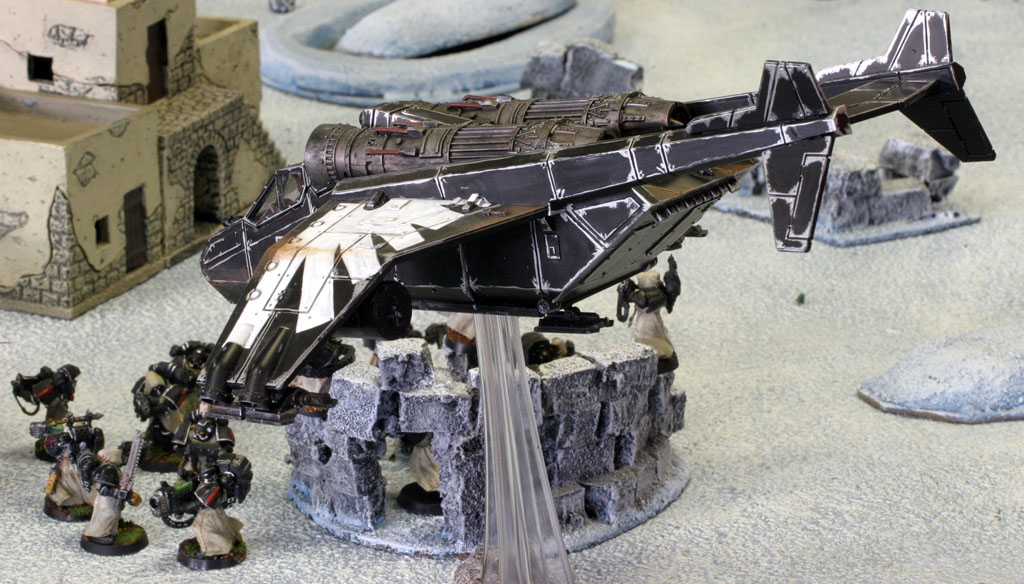 Hans Vertigue was always known as one of the best pilots in the Helatian 3rd Air Cavalry Regiment, though also the most foolhardy. Thus it came as no surprise when he was stripped of his Ace status and assigned for duty alongside the Methalor 124th ‘Flying Hellbass’ for endangering the life of Colonel Deshaun of the Death Korps in a routine transit mission. Now Half-Ace Vertigue uses his Valkyrie, ‘The Basterd‘, to haul convicts to war So I wanted to make a classic ‘black helicopter’ style Valkyrie to go along with my Penal Legion, but I didn’t want the all black model to be too bland. Researching into it, I found some very cool black models that just highlighted the black with straight Mithril Silver. I decided I wanted to try it out.

The result is the battle damage and chipping on the hull of ‘The Basterd’. The engines were drybrushed Boltgun Metal, then Codex Grey, then Devlan Mud washed. For the cabin area I just drybrushed a series of reds for a poor mans light sourcing technique. I free-handed the Half-Ace wing, leaving it a little blocky to reinforce the lines of the ship.

Have at it gang