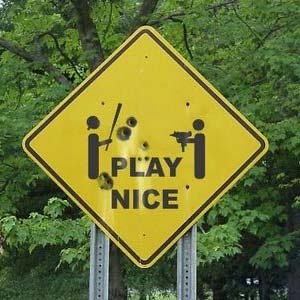 I’ve seen a variety of ways to handle winning or losing a friendly pick-up game. A lot of them suck.

I’ve seen yelling, outbursts of profanity, stomping out of the gaming space to cool off outside, catty back talking, breaking models, and throwing things. On the other end I’ve heard pompous bragging about how large a win was, and how stupid an opponent was. All of these behaviors make the player look like an idiot – esp in a non-tourney game. This is not what a pick-up game is about. The overall goal should be to have fun and learn from every battle, so that you can crush opponents when it really counts.
I fenced throughout high school – a sport that contains a myriad rules about courtesy and sportsmanship. The best lesson I learned from my coach was this: “If you can’t take losing gracefully and winning with humility you don’t deserve to to pick up a weapon.” I think it’s important to keep this in mind when you approach a gaming table. A few rules that I’ve adopted from my years of fencing:
1. Approach a game with the goal of winning and having fun, but prepare yourself to lose. You aren’t going to win every game. Aim to learn at least one new thing out of every encounter that will make your strategy better.
2. Thank your opponent for the game no matter if you won or lost, or if the game felt like a horrible waste of time. Ask for advice, and a critique of your strategy at the end of games. Respect your opponent’s knowledge, and take a chance to teach them something new, too.
3. Play nice and don’t cheat. No one learns from being a jerk, or cheating. Pick-up games are a way to perfect your game – take advantage.
5. Don’t whine, and don’t throw things. You’re an adult [I would hope]. Act like it.

6. Take your time. Unless you have a hot date to go to, or the place you’re playing is about to close, there’s no reason to rush. Think about what you’re doing so it’ll be second nature in a tournament.

7. Have fun! Exchange banter with your opponent. Be goofy. Don’t take the game too seriously.
The best pick-up games I’ve played have followed these rules. They’re enjoyable, and I feel accomplished when they’re done – win or lose.
I know we all spend time and money building the best forces we can. It sucks to lose and it feels great to win, but it’s not necessary to be an a**hat about either. Doing so makes the game less enjoyable for everyone – especially if the game is a friendly, pick-up game. Keep the seriousness for tournaments.
How do you make your pick-up games worthwhile and fun?