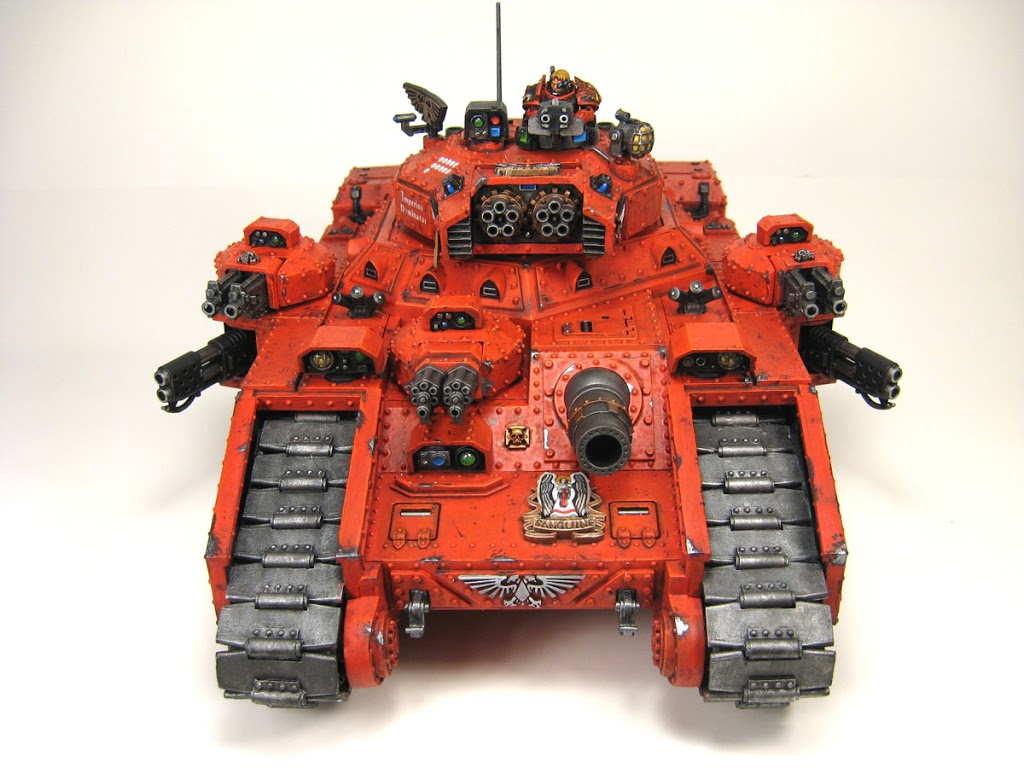 Fellblades of Renown: The Blood Angels’ Sanctimonia of Cruor

One of the things we just love to showcase is a project of true dedication by a hobbyist with a far-fetched idea and endless enthusiasm.  I’d like to share Tom McBride’s Blood Angels Fellblade.  Take it away Tom: As with the greatest of ideas this one came to me a few months ago during a bout of insomnia likely caused by over indulging in chicken wings. Lying in bed I was thinking of a new and challenging project that would be different from my normal fare. I’ve done numerous demon engines of Khorne, Plague Towers, and even a massive Imperial Leviathan that had the honor of making it into BoLS’s Lords of Battle: Volume 2. Originally the idea rolling around was of building a massive tank for my Salamanders army based on the Plaguereaper of all things. Eventually this idea conjured up images of the Fellblades, the super-heavy tanks of the Adeptus Astartes pictured in the Visions of Heresy art books. Suddenly this idea took root and flourished into something grand. What if I built a Fellblade for each of the loyal Space Marine Legions? To do this project correctly I need to do more than just paint a Baneblade up in Space Marines colors. I wanted something that fit with each of their unique backgrounds and was armed with the weapon types they preferred. Basically it had to be something that would look right beside each of the individual Legions/Chapters on the battle field. Not only that, I wanted these to be honored relics from the days when the Emperor still walked amongst his warriors, unique in their own right and champions of ten thousand years of war. They would be the Fellblades of Renown. The Fellblade art showed the main turret being similar to the old bubble top design used on the Predator tanks of eons ago. I decided that would be my basis for the turret but to make it multi-faceted so that it blended in better with the overall look of the Baneblade chassis. It would also be wider, flatter, and more centrally mounted on the vehicle. The side sponson turrets were also revamped to match and, as depicted in the old art, they would carry the heavy bolters while leaving the lower sponsons for the bigger guns. The rear engine and exhaust would be completely redone in the style of the Landraider or dreadnought although I did leave a cutout for the Baneblade’s original Adeptus Mechanicus shrine. Lastly the fuel tanks were made such to appear more integral to the vehicle as the bolt on oil drums didn’t look right on a Space Marine tank. Luckily the tracks had already been done, but more on that later. Over the following weeks I build one set of each component using various pieces of plastic card and rod along with a helping of green stuff. The rivets I got from a company called Tichy Train Group that specializes in making a variety of plastic HO scale train bits. Given that I would need multiple copies of each of these pieces it helped greatly that I run a little resin casting business on the side called Blood & Skulls Industry. As such, I was able to make a silicone mold for each of my custom parts and set about casting in a two part resin all the pieces I would need for this project. As luck would have it, one of my product lines is a series of tank treads that just so happens to look a lot like the ones from the old Rogue Trader days. The Blood Angels Codex had just come out just a few weeks prior followed by a whole bunch of beautiful new models so it made sense they would be the first to receive a Fellblade. I started with my pile of parts which included the Baneblade kit, a few icons from Forge World, a load of Imperial Guard and Space Marine bitz including the Blood Angels’ Baal Predator, and a heavy fist full of my cast resin pieces. I decided to change many of the weapons around to better reflect the Blood Angels’ style of war. Gone were the battle cannon and sponson lascannons and they were replaced by the Vulcan mega-bolter and Flamestorm cannons. I also upgraded the hull mounted heavy bolters with a twin-linked assault cannon. It took about a week to assemble and another week to paint it in the various shades of red from both Games Workshop and Vallejo. In the end an epic model emerged that would make Sanguinius proud. I give you the Sanctimonia of Cruor, the Purity of the Blood!

Next up is the rule set. The Fellblade rules made by BoLS would be basis but I’m thinking of generating a special rule that would apply to all the Fellblades of Renown in general and then another unique rule just for that particular Fellblade. If you have any ideas feel free to send them my way.

Now onto the Imperial Fists….

Tom McBride has been an avid hobbyist since his youth and has played Warhammer 40K for over twenty years. When not making war machines intent on mass destruction he works as an engineer developing hybrid trucks in the automotive industry. He goes by the username Machinator on his favorite sites.

~Bigred here. I have to say the sight of  another Fellblade brings a little tear to my eye.  I wish Tom the best of luck with his series of Loyalist Legion Fellblades, and promise to check in on him from time to time to see what’s he’s cooked up.