Hordes – Way of the Wilds: My First Steps into Circle 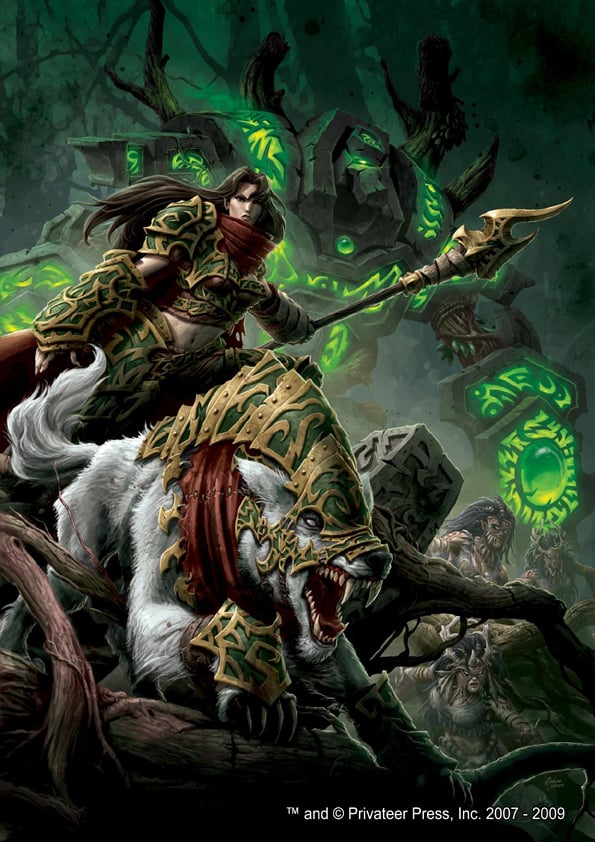 If there’s one comment I’m seeing a lot on BoLS it’s that we need to expand our faction coverage a bit. – Welcome to the Circle Orboros!

I’ve spent the last several months talking quite a bit about Cygnar, which I will continue to do in the future, but there are other factions out there that haven’t been getting much love.  In response to this, I’ve decided to start a Circle army as both a stylistic complement to my Cygnar as well as a means to reach a wider audience of readers here on Bell of Lost Souls.

If there’s anything I enjoy, it’s speed.  Cygnar has a little bit of it via spell effects like Epic Stryker’s Positive Charge, Kraye’s Full Tilt or Blaize’s Crusader’s Call, but I’m looking for higher base SPD values, and Circle delivers here in a big way.  They currently have three Warpwolf heavies, all with SPD 6, and one of them with the inherent ability to increase that to SPD 8.  They also have gobs of SPD 6+ infantry like the Tharn, Wolves of Orboros, and Skinwalkers.  To top that off, they have loads of positioning effects from the Shifting Stones, Druids of Orboros, and the Gnarlhorn and Shadowhorn Satyrs.  While they don’t have the ranged strength of Cygnar, they do have a solid spell-slinging unit and access to the ever-popular Nyss Hunters.

Already having a Circle Warpack, I decided to start with its contents for my first list.  Kaya may not be as brutal as she was in MkI, but she isn’t without her strengths.  Pack Hunters boosts your warbeast accuracy very nicely by providing a flat +2 bonus to melee attacks, Occultation makes a great defensive buff against ranged and magic attacks for melee-centric models/units by providing Stealth, Soothing Song brings some cheap Fury management to the table, and Spirit Door remains a viable method for pulling an expensive model out of an otherwise compromising position.  The Feral Warpwolf strikes me as a sensible 9-point heavy with its high-accuracy and mutability thanks to its ability to increase either STR, SPD, or ARM, so I’ll keep it for the time being.  I’m not a huge fan of the Argus, let alone two of them, so I’ll shelf them for other options.

The Feral Warpwolf feels like a good start, but I definitely want another heavy in there.  The one thing the Feral has trouble with is taking out swaths of infantry.  It can always trample, but I’ve often considered this as a last-ditch effort reserved for when the perfect opportunity presents itself.  Since Kaya’s Pack Hunters ability applies only to living warbeasts, I’ll be going with the Warpwolf Stalker.  It can’t warp for SPD like the Feral Warpwolf, but it does have Reach and higher natural P+S on its Great Sword, which cranks up to P+S 18 when warped for STR.  While MAT 6 doesn’t make it fantastic for clearing out infantry, Pack Hunters makes up for this nicely, giving you an effective MAT 8 warbeast with Reach and P+S 16.  It also has Pathfinder and access to Sprint for withdrawing from combats after destroying a model, granting pretty tremendous mobility, particularly when combined with Kaya’s Spirit Door.

To round things out in her battlegroup, I’ll add in a Gorax.  It’s a cheap, 4-point light with a healthy damage spiral and a high Fury value for its weight class, making it an outstanding model to have during the late game when one of Kaya’s heavies goes down.  Its animus, Primal, is also of note, and often the biggest reason for taking a Gorax.  Primal boosts the STR and MAT of a friendly living warbeast by 2 at the cost of an automatic frenzy next turn.  This will push the damage and accuracy of my Warpwolves up into the stratosphere,  allowing me to easier deal with either extremely high-DEF or high-ARM models.

That will constitute 17 of my 35 points.  For the rest of my list, I’ll add in some infantry and support.

I’ll start with a full unit of Wolves of Orboros with the Standard Bearer.  They’re cheap, have long threat range, and Kaya’s Occultation will keep them safe from most ranged fire while on the approach, making them a good choice to get in my opponent’s face with while my beasts.  To provide a little bit of punch and long threat, I’ll toss in Morraig.  He pairs fantastically with the Wolves and has the fast-moving mobility I’m looking for. That leaves me with five points left over for support models, which I’ll fill in with Shifting Stones, a Stone Keeper, and a Wayfarer.  The Shifting Stones and Keeper can elevate the army’s movement shenanigans to a whole new level.  They also help to heal my beasts, and are also great for just plain getting in the way of enemy models with their ARM 18 and 5 wounds.  The Wayfarer is present to grant some extra threat range to the army with Hunter’s Mark, which gives my warbeasts a free charge against the target and allows my entire army to charge the target with an extra 2″ of movement.

So, that will bring my initial 35-point list to:

This army should be hitting the table soon.  Having had a look at Domination, I’m pretty excited about what’s in there for Circle as well.  Expect batreps and more Circle coverage to follow!