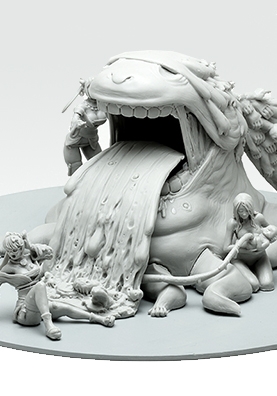 Friends, Mr. Black here, and every so often something comes along that Bigred just doesn’t know how to review himself, coincidentally, they mostly seem to stem from the Kingdom Death line, aka the people who brought us the Wetnurse.

Before I talk about the Sunstalker Infant I want you to just silently look at it- Really take the whole picture in- for me: Taken that moment to do so? Mmm, good… Now, I know you may have some questions- most notably: “Why, Mr. Black? Why does it exist?” and ~Insert Feeling of Emptiness, Hopelessness, and Quiet Sobbing Here~, both are good questions… Well, the later is sort of a horrible question as it doesn’t, er, question much. Point being, it exists. You’re going to have to deal with it now. Is it as bad as the Wetnurse? Heh, no, this cuddly lil’ guy doesn’t come close to the visuals that are the Wetnurse, but he’s unique in his own special way.

But just what is he? Well taken directly from the Kingdom Death webpage, where he is available for purchase in a limited run:

“Sunstalkers are creatures that manipulate and swim through light, shifting the colors of the spectrum at their whim. A tribe of humans began to worship a very ancient Sunstalker as the sun itself when it stepped down from the sky to rest on a mountain top. Countless generations and centuries have past and a strange human & monster relationship has emerged. The human culture tends to the young spawn, feeding it with a combination of food and ritual sacrifice. Only the fairest of maidens are selected for the horrifying honor of being a caretaker and not many survive the creatures period of infancy.

In an attempt to create a lasting relationship between the human and monster, the child of a mighty sun warrior is umbilically attached to the young sunstalker. A highly dangerous practice that occasionally results in a symbiotic link between man and monster. Sometimes the human child gaining some of the creatures strange ability to manipulate light.”

Oh, and just in case you were feeling lied to, it closes with this:

The scene depicts an infant sunstalker, vomiting a rainbow in the chaos of its rearing.

I would say that such a model existing gives me that warm fuzzy feeling inside, but then I’d think about rainbows and we’d loop right back into monster vomit. Heh, that’s a sure sign that you know you’ve found something worth hanging onto when just by it’s very existence it warps something clean and wonderful into something perverted, dirty, and oh so much more wonderful.

~As with the Wetnurse, this model is a limited run. So head over there and pick up yours while you can, dear readers. Let the wonders of Kingdom Death invade your LGS, let it spread far and wide. -Mr. Black