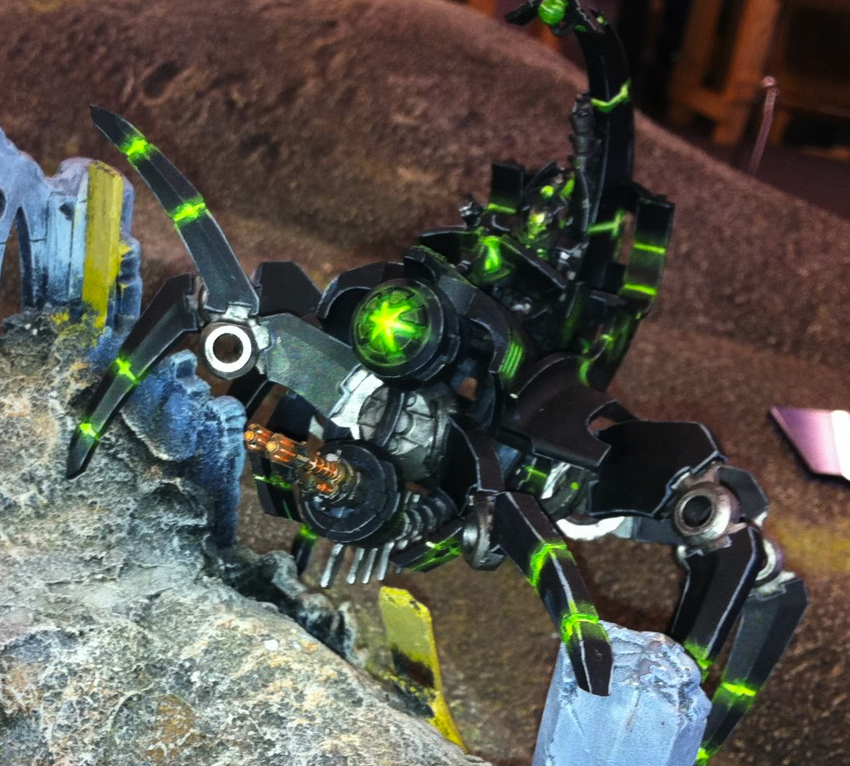 Brent here. Two weeks ago I challenged the Blogosphere to write my article for me on one of three subjects.  At stake?  The opportunity to later write a filler article of his or her own!

For what it’s worth, that’s the better kind of exposure.

There were a number of worthy entries, including one of which I’m publishing on Strictly Average today.  (It’s Post 601, a for-no-apparent-reason milestone!) but there could be only one winner.

And it turns out that man’s name is General Smooth.  He picked Topic 3; as a reminder…

Brent has an older Necron army that needs updating.

He’s hoping for something competitive but not necessarily optimized. Currently in his collection are: A Necron Lord, A Destroyer Lord, 28 Necron Warriors, 10 Necron Immortals, 8 Scarabs, 2 Wraiths, 5 Destroyers, 1 Heavy Destroyer, Monolith. Use as much of this as possible for the base of an updated army.

Assume all models in the book are available.

So what follows is the General’s prize winning entry, a discussion of a Necron army list he developed using my models as a base.  Please note, I’ve tried to make the format easy to follow, but inevitably someone will complain about all the formatting.  This intro to the article and an explanation in the middle are in italics, then I close the article in red, as always.


The normal font is General Smooth’s article.  Feel free to skip any of the rest!


Before we move on… were you folks at all curious what the wrong kind of exposure is?

The Intro (or a Love Note to Brent!)

General Smooth:  When I decided to write this article, choosing to do the Necron list was the easy bit. Two things required careful consideration:

Secondly was the list itself.  I like a little quirkiness without losing utility, redundancy through variety, and most importantly tactical flexibility. Oh, and I love a little Kansas City Shuffle. Then it also had to be a Brent list – allowing for some kewl customisation from age old models and consistency in play.

So, Your Immenseness, with these things in mind I have written you an article.  I hope you enjoy my submission. A Necron Overlord / Phaeron with War Scythe and Mindshakle Scarabs:
This is the real Necron melta!  24-inch range from the rear of your barge, hitting on a 3 or 4 on rear armour, ignoring cover with st7 + 2d6. That’s a nasty bit of stuff. Oh, and you get a cover save and your AV 13. So that is the easy justification for taking it. Here’s the niche stuff. The barge allows you to attack during the movement phase.

This is important as it allows you to allocate your movement with greater knowledge. This means if you pop the tank you know you can move your anti tank elsewhere and focus your anti infantry here on the disgorged troops or you can ignore the threat that the tank you just destroyed previously gave you or lots of other permutations.  The point is killing stuff in the movement phase is real useful. Next great thing about this unit is if you move 12 you can have 3 phases of attack – sweep attacks, shooting and assault – eat that. Jump back in and off you go. This will be an article in itself in the future. But I’m sure I don’t need to tell you, Brent, of the benefits of a kewl ride with a big beat stick in hand and some shackles in the other.

I skipped the Destroyer Lord as I would have to build the list around him. It just wasn’t going to happen in the time it takes to write this article. Given longer I will do something creative with him but for now he’s sidelined. Harbinger of Destruction with Eldritch Lance and Solar Pulse:
The solar pulse allows me to dictate aspects of the game and gives me real flexibility to play to my strengths. If its night fight and the Tyranids are rushing at me, light it up, if its Tau lets stay dark for a while longer. The Lance is just gravy.

Harbinger of Transmogrification with Harp of Dissonance:
Tremorstave is a nice disruptive bonus but this is all about the Harp. Some people will dismiss this as a gimmick. I say come to my house and I’ll show you gimmicks. This weapon can double the effectiveness of a units attacks against a tank each turn. For instance it takes 27 heavy gauss shots to wreck a Landraider. After one hit from the Harp of Dissonance it is down to 13.5, another hit brings it down to 9. The same effect applies to Tesla Destructors versus Dreadnoughts. One hit from a HoD allows immortals to pen Rhino’s. but it is a bit unreliable.

Harbinger of Eternity with Chronometron:
The rerolling one d6 makes the HoD entropic strike twice as reliable from .333333 to just over .6 probability. If you do not need it for the entropic strike you can use it on the penetration role of either the HoD (yes it does have a strength value) or the Eldritch Lance.

These guys sit in the Ghost Ark like the dudes they are, pinging away at AV. Your opponent can ignore them or chose to pull down AV13. Again worthy of an article in themselves not time here though, onward hooooooo! Warriors (15-man) with a Ghost Ark:
They provide a durability which some armies will struggle with. Keep them away from heavy flamers and assault specialists though. Make them relentless and you can average 5 glancing hits per turn at 12 inches at 3 different targets or 3 glances at 24 inches at 3 different targets. Nice! Also good for torrenting entrenched infantry.

Warriors (5-man) with a Night Scythe:
The twin linked Destructor is just a beautiful weapon. Not going to spam it though as the platform is too shakey for the price but you should be able to keep one safe if you do things right. The troops stay in it and if destroyed go into reserve popping out of the monolith when needed or seize rear field objectives. Another big gun. With the Tesla and twin linked rule it just keeps hurting again and again and again.

I’ve seen some of your previous conversions and had an idea for a Night Scythe I thought you might like. General Smooth is referring to my most famous Blogosphere Blunder, the ‘Gun Shy,’ the first and only Dyson Pattern Storm Raven.

I was so proud of this conversion!  Here’s one of the original pictures that hit the ‘Net on Strictly Average… which somebody thought looked like a hand vacuum cleaner. I was devastated.  So I added wings… but did the mocking stop? Nope.  Some wit commented, “You can’t paint a turd.”

But I digress; back to the regularly scheduled program.

General Smooth (continued):
Anyway 1 x 5 man squad of Warriors. As above, they go in reserve and come out of the Monolith when needed or hide in your backfield for objectives.

Immortals with Tesla Carbines:
The carbines make up for the lack of relentless. Durable scoring unit which can stun Rhino’s and pen with the help of HoD. Threat range of 30 inches. Now does your opponent direct AP:3 fire here or at vehicles or torrent here or at Warriors and vehicles – decisions decisions?

Monolith:
Love these guys. Mobile cover and severe anti-infantry capability. It is a tank, so I understand it can ram or Tank Shock (important for shifting troops off objectives and then using Portal of Exile on them). It’s AV 14, which is an absolute pain for opponents. The kicker for me though is the fact that infantry (either unengaged on the battlefield or in reserve) can just appear out of it. This has the ability to completely change the lay out of a battlefield at a whim. Imagine you can put any number of infantry you want into your dimensional corridor so long as they come within 6 inches.

Annihilation Barge:
Like the model and it does bad things to bad people. Also AV 13 – Simple choice when I had 90 odd points to spare.

Canoptyk Spyders:
50pt monstrous creatures. Yes, I’ll have 3, thank you. They are a good unit in themselves. Tough and if you play with the points just a little you can add in benefits like a Fabricator Array and a Gloom Prism, which can really buff your army. And yes they make Scarabs, oh yes hahaaaa.

You just had too many options here. With more time I would definitely have brought the Destroyers into the fold ;-] and Wraiths are a strong part of the army list I’m hoping to build for myself, but neither appear in this list. Sorry guys but not this time. Scarabs:
So Scarabs are the one everyone is waiting for when they hear Necrons. There is so much hype about these guys that if you play a top opponent they will be ready to wipe them out. So I’m going for 2 units of 4. Cheap enough to throw away as tar pit, mobile infantry cover or bubble wrap. Small enough for your opponent to question their threat level. They still pump out 20 entropic strike attacks on the charge though. If your opponent ignores one of the two units then one of them is going to be 7 strong in turn two, within charge range and you are going to have less resources to deal with them. If your opponent chooses to tackle them, then they have allocated valuable early game long range fire on a 60pt unit with a 3+ cover save and 12 wounds. If they don’t completely destroy the Scarabs they will be back up in numbers again next turn. They just keep coming all night long which as you know is a good thing.

Finally Heavy Destroyers:
2 lascannons on jump infantry platforms – side armour shots here we come, or just pop at things from behind the Monolith. Mainly a suppression unit against high AV or to get those quantum shields down. Only two makes their threat questionable and will likely be forgotten about by an opponent, but as the game wears on through 5 turns they will get you results. Assuming the HoD hits they will wreck a Monolith or Landraider on the first turn an average of 1 in 6 games. Small squad size means they are a lot easier to hide.

And The Closing Paragraph…

Durable, flexible and can pump out hurt. That’s how I thought you’d like it Brent. Publish it or not. Your choice! My catchline would have ended, “…or not, your option,” but overall I’d say he’s read enough of my stuff to know what would appeal to me, right down to the humor!  Sometimes playing to the judge works out.

The Necron pictures used in this article are from Warhammer with Zail, a nifty new blog you can see HERE.  Did you notice the hidden link for the Triarch Stalker tutorial?

So to close this hot mess out, General Smooth’s entry wasn’t the best written, from a technical standpoint, but for my 2-cents it was the most opinionated and thus the most interesting… so for that reason had the most mass appeal.

Or am I wrong?  Does his article get some hugs and gropings or not?  And what about the content – agree or disagree?