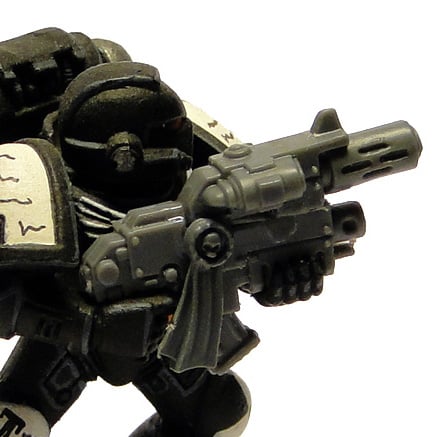 MBG here again with this week’s Conversion Corner, and this time I have another great cheap and easy conversion for you.

Today I take a crack at converting one of the hottest bits around right now; the Combi-Melta gun.

This bit, (along with even just the standard melta gun) flies off the shelves for us sales wise. But while it’s a great seller, it’s also one of the most expensive single bits out there.

So in today’s Cheap ‘N Easy article, we’re going to see what we can do about equipping Combi-Meltas a little easier on the wallet.
Parts List
Blood Angels Infernus Pistol (Left or Right)
OR Fusion Pistol
Space Marine Boltgun
Optional Parts

Okay so this conversion is pretty straight forward, you basically just cut a notch in the bolter to accommodate a trimmed down Infernus pistol bit.

First off just cut the bolter like so, flush across almost the length of the gun in line with the ejection port. Now as you can see I cut down from the top a little too deep. Whoops!

You can fix this by letting a dab of plastic glue melt and then trimming it flush with a hobby knife, OR covering it up with another bit.  I opted for covering it up, as I was pressed for time (stay on target)! Next cut the melta pistol flush straight across like shown. It may be easier to cut down the Sanguinary Guard pistol bit, however all I had on me at the time was the one from the Death Company box.  Either way the bits are inherently the same.

After that all that is left to do is to attach the two bits together! Notice the purity seal covering up the gouge I cut. I think having putting it on there still works, as the eye is looking for the ejection port (or just something in general) right where it used to be.

Here’s how it matches up to the actual bit…. Note how the fuel tank is on the inside of the gun, if you equip it across the chest of the model?  I think either the right OR the left version of the pistols will work mainly because of this, because it doesn’t seem to matter which side the tank is on.

Another reason to make this conversion (besides saving some scratch) is that it will fit in any existing set of bolter arms that you may have glued down already.

The actual combi-melta bit will not, and seems to fit kinda awkwardly unless you one hand it.

Check out the look and feel of the converted gun below on my test Black Templar. So what do you think? Look good, or no way? -MBG