GW Business: Now You Release Them?! 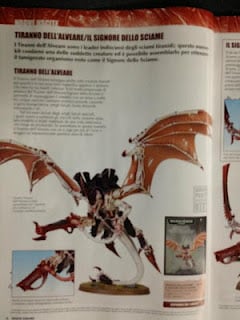 Seriously, Sometimes I feel like GW’s business practices in relation to their release schedule is like breaking up with a girl and finding out two weeks later that she got a boob job lost 10 pounds and finally got rid of that annoying laugh, you wish it happened before you moved on to someone else.
What in the world am I talking about?  Well, unless you have been living under a rock for the last few days you’ll know that GW just announced models for Thundercav and several Tyranid enteries.  The following are my thoughts on the whole thing.
First: A disclosure, think what you will but I am not one of the “Whine cause it isn’t here and then whine when it is here.” What I am referencing in this article is the lack of clear business direction and general acumen.  I love the models themselves and will likely be buying a few, this discussion is about business practices.
The business side of things:
Tyranids Came out in Jan 2010, Space Wolves came out in Oct. 2009!  Lets see what else came out in 2009.  “The Blind side” won all sorts of oscars, The iPad wasn’t even out yet and Apples newest was the iPhone 3G. Seems like a long time ago, doesn’t it?  Well, thats because IT WAS! It was almost 3 years ago for the Wolves and easily 2 for the Nids.  Who does a supplemental production line 2-3 YEARS after the release? should we expect Alcon entertainment to release behind the scenes clips from “The Blind Side,” no? How about Apple, should they release some new and improved screen for the iPhone 3G? NO!  And why wouldn’t these companies release those products? BECAUSE THE WORLD MOVED ON!  Seriously, even George Lucas and his Billion dollar franchise of Star Wars can’t bring something back from the dead (Phantom menace 3d still is phantom menace, red letter media review).
Seriously GW, I 100% understand a ‘delayed release,’ but in all honesty it should be no more than 6 months after the release of the codex. Why, you ask?  Because 4-6 months is about the time when peoples’ excitement over their new shiny stuff starts to wear off (most products are this way, not just models).  It also coincides very well with your current release schedule of 1-2 new codices every year.  If you followed this wisdom then just as people were getting bored with their current build you would release a second wave and WAMMO! people are excited about them again.  This has the added benefit of not being enough time for players to figure out that the codex sucks or to be invalidated by another (newer) codex (cough GK cough).
For goodness sake GW you say that you are a model company… Act like it!  Get your stuff together with a reasonable release schedule! 2-3 years for a second wave?! That’s like really…S…l….o……w.
Here is a little MBA 101 on how most traditional companies work with ‘wave releases.’
Stage 1: All waves are created together and sit ready for “just in time production,”
Stage 2: Individual products are selected for wave one and released.  Inventory controls are put in place and limits are set on how much inventory turnover is supposed to happen in a specified amount of time (Sales/Inventory).  Soon a deadline of days is hit usually 120-180 days (assuming inventory and production levels don’t go through the roof or floor) inventory controls are enacted and often stage 3 is set into motion.
Stage 3: The second wave of products is released and the cycle is started again. Now, here is the thing, people will still buy the models. Sales aren’t going to plummet to the ground and the company goes belly up. Im sure some will even replace their lovingly-made conversions.  But by doing this release this late you have directly weakened your income potential, particularly in the Tyranids release.  You made many beautiful models that will do nothing but sit on the shelves.
As I said, this isn’t something that will ruin the company.  Heck they only left out a couple million of dollars from sales, but I have to ask as a person who buys and sells companies on a daily basis.  Why would you leave a single penny sitting around and not hitting the income statement? For goodness sake, you are a publicly traded company, you can’t tell me that your shareholders are happy with this, can you?
The Models:
Tyranids- In all honesty the Tyranid models are amazing!  they are very dynamic and are just asking to be painted…Too bad it will take some major changes in 6th edition to make me even think of playing bugs right now.  They just suck too bad and I am knee deep in GK right now.. Still though, the models look great almost to the point that looking at a well painted Tervigon will almost make me vomit a little. lol Thundercav- I know everyone is going to yell at me for this, but I think the wolf models could have used a little more grimdark, but to each his own I suppose.  I do like the shields and axe on the riders.
So what are your thoughts? Is GW smart to release these models 2 years after the codex dropped? What are your thoughts on the models themselves.
Duke