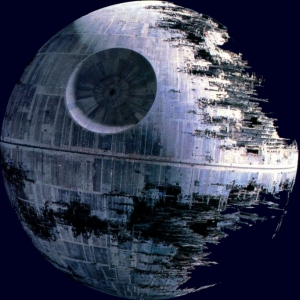 Fair warning!  What’s another article on design and strategy in Warhammer 40K when the sun is setting on 5th Edition?  Still, strategies start life off the table, in my not-so-humble opinion, and 6th Edition isn’t going to change that.

Yes, it’s a Terrible Tuesday; they come once a week at Strictly Average.  Let’s jump right in.  We might as well start here:
What’s a deathstar?
First, notice it isn’t capitalized.  A deathstar is a nickname for a ridiculously hard-to-kill unit, while a Death Star… …takes a dive to a couple of proton torpedos.  Because destroying a space station so large it generates its own significant gravity is what, just like hunting rodents with a face full of sand?
And what the heck is a womp rat, anyway?
For our purposes, a deathstar is any unit that is a significant investment in points which can absorb multiple turns worth of damage before losing significant combat effectiveness.  Usually one or more Independent Characters are attached, both to allocate out wounds and to add special rules to the mix.
* * *
I first came across the concept in Warhammer Fantasy, where it plays more like THE strategy than A strategy lately, but it isn’t hard to find examples in the Grim Dark.  Here’s one of the best, in my opinion… …the Shrike Star!
Yeah, that’s one of the side benefits you get for playing a deathstar – make oh-so-clever mashup names for your uber unit.
Anyway, the Shrike Star is a good example, since it boasts a maxed out unit of Thunder Hammer / Storm Shield Terminators (Hammernators… sigh!), a Chaplain in Terminator Armor, and Shrike himself.  Obviously, you’ve got a 2+/3+ across ten models, but you get more than that:
Special Rules:  The Chaplain provides for a reroll on the charge – meaning there is nothing this unit won’t grind into dust – and Shrike allows this unit to infiltrate onto the battlefield… so you’d best hope it can’t hide within 12″ of your battle line!
Allocation:  Normally, you’ll want to allocate incoming fire into the Terminators, but after some casualties it might be worthwhile to take the odd hit into the characters.  Obviously nothing that would double them out, but risking a wound on Shrike will, at times, be better than losing another Terminator.
Before moving on, it bears saying there are numerous ways to set up these concepts, from the tweak to the gross addition.  If I was running the Shrike Star, the Chaplain would boast a Jump Pack, increasing the threat range of the unit and potentially allowing either the Chaplain, Shrike, or both to charge out on their own.  As for the ‘gross addition’… that’s a nasty combo I thought up for Wargames Con…
* * *
Speaking of allocation games… Nobs Mobs!  I’ve seen them with and without bikes, and there’s something to be said for both.  Still, the classic is a large mob of bikes heading your way, complete with Warboss and Painboy.  It moves fast, hits hard, and is tough to put away since each Nob has two wounds.
Much like… Grey Knight Paladins!  In this case, proudly represented by Duke’s Custodes army, but the point is the same.  Each GK Terminator has two wounds and a mixture of weapons, making it resilient as all get out.  It’s usually joined by an inexpensive Inquisitor or Techmarine with Grenades of What’s-That-Do?
Ouch.
There are more, including well-known examples like the Fex-Star and Straken’s Blob Squad, but these units are all the same.  Aggressive.  They’re meta-breakers, units designed to influence the entire battlefield and thus the shape of the game to come.  In most games that include a deathstar in the hands of a competent general, the game will become almost simple…

…destroy the mob and win, fail to do so and lose.

That’s an oversimplification, of course; sometimes it’s best to minimize the unit’s impact, for example by feeding it cheap units and making sure it doesn’t win back its investment – but that’s neither here nor there.

Deathstars are around to stay, be it 5th Edition or 6th, we’ll keep seeing these units on the battlefield!  Here’s the question for the day:

What’s your favorite deathstar and why?  In general, do you like using them or not?  By somebody better mention the Lordstar – I left that one out on purpose, it being the newest on the scene!

That’s it for the day.  Visit Strictly Average and, as always, thoughts?  Comments?  Hugs and gropings?