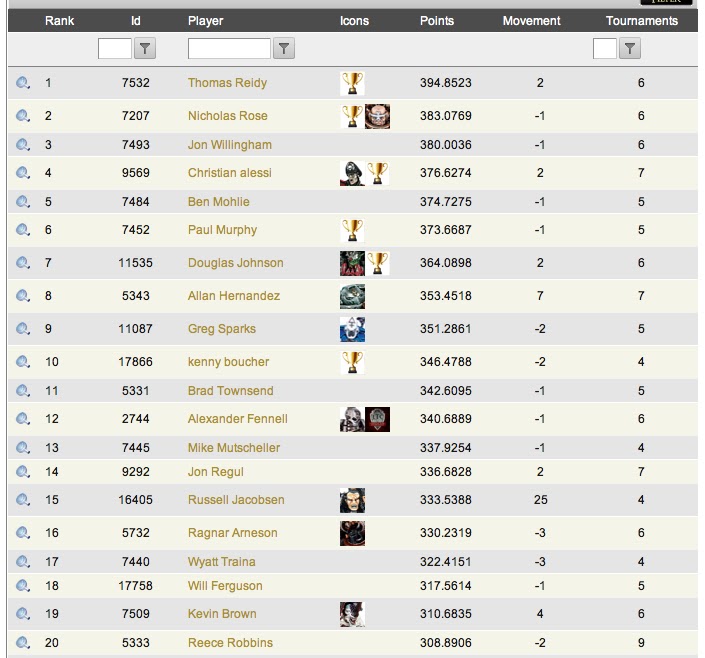 I made a shameful discovery last week, as I tripped all unconcerned across the Blogosphere, clicking on seemingly unconnected links in reckless abandon… what?  No, no – not that!  It’s the other embarrassing thing you can discover about yourself online.

Turns out, I’m a ranked player on something called ‘Rankings HQ.’

My father caught me at it, too.  Oh, the humanity!  Why couldn’t it have been naughty videos or something?

Before we begin I’d like to point out something you probably already know.  Daylight Savings Time is great!  In the fall.  In spring?  Not so much.  Since it seems we’re all missing an hour, today’s Terrible Tuesday article isn’t going to be quite so wordy.  It’s more a, “Big Red spends five minutes, drops a topic, and gets more page views than the rest of us,” type of article.

Many of you probably know more about Rankings HQ than I do.  Here’s the LINK; pull it up in another window – no, don’t leave! – and give it a gander.  The link skips the advertisement rich main page and jumps right into the country breakdown.  It looks like this: There are 18 countries… and no, I’m not counting USA- South West.  That was no doubt created so somebody could feel good about segregating the pond somewhat.

Basically, Rankings HQ keeps track of tournament results across the world and uploads the information  into its database.  Not to give into regionalism, but here’s the pic of the USA standings: I snagged the Top 20, and no, the names don’t surprise me.  I know most of these guys personally, if not well, from the Indy Tournament scene.  The ones I haven’t met I know by reputation, so it’s safe to make this rather blanket statement:

Like it or not (and the article isn’t finished yet and some of you are gnashing your teeth!), Rankings HQ’s system has captured most of the top named players in the country.

I didn’t realize this prior to starting the article, but Bell of Lost Soul’s very own Goatboy and Darkwynn are topping the list! Yup!  For the most part, I’m on the outside looking in.  Life on the D-List, don’tcha know!

Perhaps that comparison is a bit overdone, but not by much.  Based on the numbers, I was probably in the top 50 right after my finish at Feast of Blades this year, but it’s dropped considerably since then.

Let’s not go into the actual mechanics (since I’m not sure I can actually explain it); suffice it to say, each tournament earns you points, and the points for the tournaments over the last 12-months are added together for a grand total.

So for example, my number has started slowly going down since Feast of Blades, as previous tournament results drop off with the steady march of time, whilst others continue to accrue points in other venues.

Take Goatboy, for example, who placed at the recent Bay Area Open (hosted by Frontline’s Reecius, also in our prestigious list) with his Space Goats.  That score pushed him up two places to nab the top spot.

Okay, let’s hit the obvious downsides, ’cause I’m not going to pretend there’s not some glaring problems with this.  Primarily, I see two…

Now let’s play Devil’s Advocate: it seems the system generates points based on the size of an event, meaning top finishes in large events merit more than first place in your local pond.

As it should be – those are the results that matter.

Secondly, how many of you are invested in your Rankings HQ number?  I didn’t even know it existed less than a week ago, and frankly it’s not something I’ll lose sleep over one way or another. …but I’d wager those players whose stores submit results are invested!

So what?  Good for them, it’s  exactly as it should be!

So it’s not something we’re into – I’d wager a bunch of us would change our tune if we were players at such a store.  Don’t give me that look!  The proper motivation is enough to make anyone give forth a bit more effort.

Sour grapes shouldn’t spoil it for those folks who enjoy a more competitive aspect of the game.  And pish and tosh to all the, “But the game isn’t balance for that,” nonsense.

I said it.  Nonsense.  That strikes me as a statement wholly true in fact that still misses the point entirely.  A game by its very nature is competition, whether you’re taking on the house or a buddy.  If you’re at all well-adjusted, it’s good-natured at that.

That’s a win-win!  In my mind, Rankings HQ could do a better job on some areas, but overall it strikes me as an interesting reinforcement for tournament-minded hobbyists across this great community of ours.

Here are some recommendations, mostly in the area of self-improvement:

I’d like to see where I stand over time; where my results stand among peers with a similar dataset; areas for improvement such as painting or sportsmanship; and perhaps a history so it could be analyzed over time.  Maybe a percentile ranking, or a mean based on a standardized tournament size; something worth comparing!

(Did that sound wrong?)

Ranking HQ has motivated me, I’ll admit it.  Looking through my profile, I realized my low soft score from Adepticon tanked my overall numbers.  The soft score in question was ‘painting.’

I’ll leave it to you to figure out the inherent irony there!  (Hint:  Think WAAC vs FAAP…)

So what do you think about Rankings HQ?  Is it the wrong kind of message for the hobbyist or the right kind of motivation for those who enjoy that side of the game?

Is it unfair that so many points are earned through the big Indies, which – let’s face it – can be a sizeable investment in cash?  Or  are you excited about involving your local scene so you can compare yourselves against games across the land?

As an aside, the low soft score was deserved; my Daemons army has been my ‘rugged workhorse’ for a lot of years.  Now I’m inspired to put forth more effort on my tournament army this year!

So thoughts?  Comments?  Hugs and gropings?