Robert B 4 Minute Read May 2 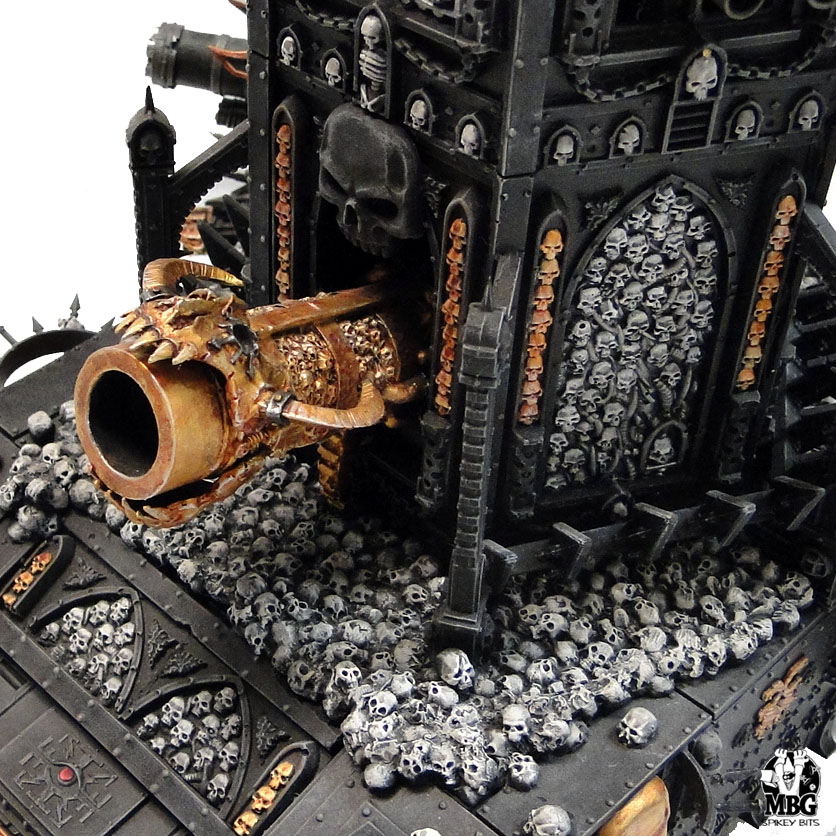 Checkout this amazing Tower of Khorne conversion by Yepimadork.

I’ve been getting all sorts of excited as of late with rumors of Chaos becoming more and more frequent.

So I thought I’d share my Tower of Khorne that Yepimadork made, with you all today, as we grind closer to hopefully a new book for the worshipers of the Dark Gods.

This model is one of the few good looking Towers of Khorne out there, and I’m proud to finally own one (Brass Scorpion’s and the resin kit that’s sold on eBay are also my favorites).

Bits List
Unfortunately I don’t have any work in progress pics of this behemoth, because of its “age”, but I will do my best to break down the conversion from what Yepimadork told me and what I can make out from looking it over myself.
The Conversion(s) The vehicle itself is easy to see, as far as construction goes, the details are in the placing of everything so it looks like it’s supposed to.

The tower was built up from the Baneblade chassis, by making hexagonal wall sections from the Cities of Death panels themselves.

Gothic braces were added to provide stability to the tower, but I’m sure some internal bracing was required in the exposed Baneblade compartment to support the extra weight of the tower and to provide a solid base to build off of first.

Weapons were added next, with the top guns being added before a roof was attached on the tower. For the side guns, Thunderfire Cannons were used and accented with Defiler/ Soulgrinder armor plates. The main gun itself is, of course, a Hell Cannon which has to be placed before the second story walls are attached.

For painting purposes I was told it’s good to leave the tower in sections so that everything can be easily accessed.

Skulls from the old Armorcast road set were broken up and then arranged around the walls, and on the top of the tower, with a few “loose” Games Workshop skulls glued about for a more natural look (if there is such a thing as a natural look to hundreds of skulls being piled up on top of each other).

Dozer blades, skull plates, daemon heads, etc. were all placed about as shown to accent the Chaotic nature of the model. The top of the tower was adorned with all sorts of spikes and grizzly trophies from many different kits,  all in tribute to the Blood God.

When assembly was complete, the whole model was drybrushed codex grey over a black undercoat, and from there all the metal and skulls were picked out.

Brasses and Golds were used for the weapons, while the Skull white was used sparingly on all the skulls (how appropriate given the subject matter).

Check out the pictures below for all the close-ups you would need to duplicate this behemoth yourself. The only thing I am unsure of is how the top guns were assembled…. Blood For The Blood God- TOWER OF KHORNE!– MBG