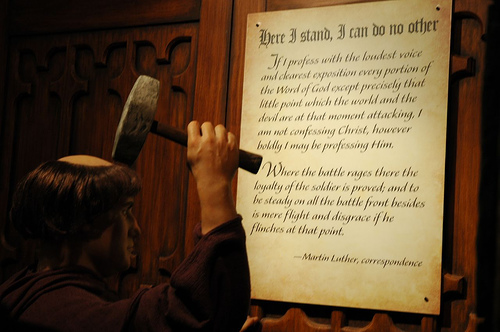 If the title didn’t give it away I want to talk about a paradigm shift that I see happening.  This shift,  In my personal opinion, is a great thing for the hobby… “I am a Wargamer”

Hola everyone!  Señor Duke here. Well, today I don’t have any silly business to bring you (sorry).  I wanted to talk about something that has been bouncing in my head for a while now (yes, there is a lot of room to bounce in there).

Now, this might not seem like a surprise to most of you, but for a while now we have separated ourselves into buckets like “I am a Warmachine player,” or “I am a 40k player,” why?  Why can’t you just simply BE!?  In the past it was as if by supporting another game we were cheating on our preferred game system (Which was usually a GW system).  This doesn’t have to be the case!  I fully support the move from supporting one company dogmatically to refocusing out allegiance into the following areas.

The Dogma of the Wargamer:

We should no longer draw party lines based on which game system is your favorite at this moment.  Though I love 40k I am no longer a “40k Player,” I am now a “Wargamer,” and I will play or encourage play in all systems that live up to the points above.  This doesn’t mean that I will stop playing any system that doesn’t meet all of the criteria either. It is just simply is the direction in which we choose what games to play.  That said, if companies refuse to provide these things then we move on to the next system that does.

Some of you know that I run a convention called Feast of Blades, when we first started we were only a 40k event, and even though a major portion of the attendance is for 40k we have dedicated ourselves to becoming a “war-gaming convention.” Which means we are actively seeking out all sorts of games systems to include at our wargaming weekend.  Nothing is better than going to an event and getting pulled into a game system you have never seen before, it is like being a kid again and asking your friend “what is this game?”

Here are some non-main-line game systems you should look at and ask if they meet the new ‘Wargamer Dogma.’  If so, then pick them up and continue to diversify yourself! This isn’t an exhaustive list, it is more to get you looking at some of the ‘less popular,’ systems.  Feel free to insert other game systems that deserve praise (both large and small) in the comments below.

So, who will stand with me?  -Duke