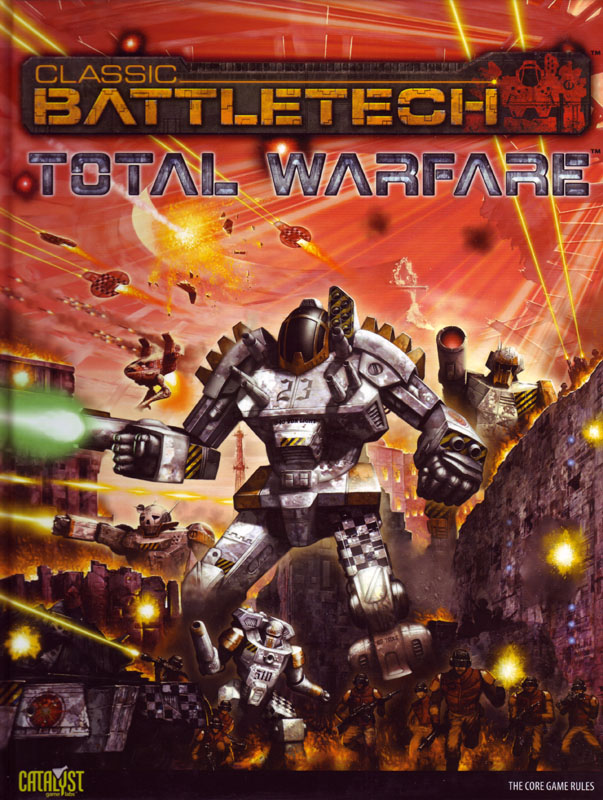 Hey, y’all, Voices back with yet another BT article.  This time–and in recognition of the advancing age of a lot of the hardback rulebooks for BattleTech–we’re not doing a review; we’re doing an overview.  And our hard target lock is on BT’s BRB of BRBs: BattleTech Total Warfare.

The book is a good 300+ page hardcover in full color, hard-wearing and well-done.  Just picking it up, you’re struck by the cover art of BT artist extraordinaire Franz Vohwinkel of a new-style BattleMaster advancing through an urban war zone supported by a Clint, Atlas, Catapult, and infantry both armored and unarmored.  Normally, I’m not a particular fan of Vohwinkel’s art; but this piece is a very good one. After the lengthy table of contents and a brief introduction that tells you just how “big” BattleTech is, TW gives us two classic FASA-style “up front” chapters: Components and Playing the Game.  Components explains what’s what in presentation, while playing the game goes over concepts such as dicing mechanics.  They follow this with two chapters on movement; the first is for ‘Mechs and ground units, the second is for aerospace movement.

Finally, in Chapter 5, we get to the meat of the game: Combat.  After Combat is everyone’s favorite bogeyman of BattleTech: Heat.  Since heat is such an important aspect of…well, game play…it’s probably good that it got its own dedicated section instead of getting folded into another location.  Following heat is Buildings, which covers the terrain specific to urban combat. The next set of chapters is dedicated to “special case” units, types that aren’t simply ‘Mechs.  ProtoMechs, Combat Vehicles, Support Vehicles, Infantry, and Aerospace units each get their day in the sun.  The Aerospace chapter really is about how to make strafing runs and fight aerospace battles, which wasn’t covered earlier (and it seems kind of odd that it’s back here, given that the movement chapter for Aerospace units was way back earlier in the book…).

Personally, I’ll stick to my vehicles and infantry; which brings up a fun little quandary: what’s the difference between a Combat Vehicle and a Support Vehicle, and why do they each get a chapter.  Well, the answer is “what does the vehicle do?”  If it fights primarily, it’s a combat vehicle; if it helps out combat units (of all stripes), then it’s a support vehicle. The Support Vehicles chapter is really just a clearinghouse for “special cases.”  Airships, slower-than-standard movement, tractor/trailers, and how you go about having your infantry platoon commandeer something like a MASH truck as an impromptu personnel carrier.  The preceding Combat Vehicles chapter gives you all the information you need to use vehicles in combat.

Infantry can be roughly broken down into “how does standard infantry function?” and “how does Battle Armor function?”  Each one is given, though the number of similarities and matching rules means that they share a chapter. Following these five chapters is a dedicated chapter for creating scenarios and picking forces.  This includes random map rolls and random assignment tables, though it only barely touches on Battle Value construction; BV seems to have been moved by Catalyst quite firmly into the “this is thoroughly optional” category.  Use of BV is presented not here, but in the next book, TechManual.  Following the Scenarios chapter is a nice, beefy chapter entitled Painting Miniatures, which not only tells, but shows! (though comprehensive step-by-step descriptions and accompanying pictures; they gratifyingly don’t skimp on this stuff) how to paint a ‘Mech, Battle Armor, infantry trooper, and vehicle to match the cover art.  It seems like an odd choice to “match to cover art” instead of “how to paint to match a regiment;” but it works.  I guess I’ve just never been a fan of white.  The weathering on the units, however, is particularly nice.  There’s also several tutorials on converting vehicles and ‘Mechs (the specific conversion they did for this book was Natasha Kerensky’s Widowmaker variant of the Daishi, and it looks impressive.) and a very brief section on kitbashing terrain.  Though well-written and thorough, I’m going to go ahead and guess that, for most of you reading this, this chapter is almost entirely superfluous: if we’re reading BoLS, we probably already know how to paint not just a miniature, but an army; and have at least read on kitbashing our own terrain.

But I’ll go ahead and say it: many BT-strict players could benefit from giving a good, long read and reread of this chapter.  I’ve seen multiple players with ‘Mech collections that were “painted” using a colored spray can and calling it a day; and whose terrain attempts look pretty bad because they did the same thing.  Going halfway and calling it good only leaves you with terrain that looks like trash; do the research, find the right materials for the look you’re after and build decent stuff.  Short 2×4 boards with holes gouged out of them and spray-painted gray does NOT look like “cement wall;” it looks like spray-painted 2×4.  Here’s a quick hint: if you can still see the grain of the wood, then you’ve failed to convince.  Learn what plasticard is, learn that spackle–or textured paint–is your friend. Each chapter leads off with a brief intro related to the chapter’s theme, usually a piece of fiction written by one of the staff.  My own personal favorite is “Proper Work,” preceding the infantry chapter.  The index in back is comprehensive and very usable, and the twenty-plus pages of tables collating everything that’s been presented in the bulk of the book is welcome.

But is it necessary?  All the basic rules for standard BattleTech play are in the box set.  The box set has the folding cardstock maps (TW doesn’t) and plastic minis (TW doesn’t).  It’s got record sheets; and unlike all prior BattleTech Compendiums (yes, I include the Master Rules as a “compendium”), TW has not a hide nor hair of a usable blank record sheet in it at all.  In fact, for blank record sheets, the basic ones are in TechManual.All that said, if you want to advance past the intro box, Total Warfare’s the next real step.  I can’t really put a score to it–nor will I–because of its near-absolute necessity to the game after the box set.  Simply, with only a few exceptions, all the rulebooks and sourcebooks currently in publication refer to this or rules that build from this if they aren’t just introductory products.  Tech Manual has the construction and a lot of the fluff for the equipment and unit types in Total Warfare.  Tactical Operations expands on a lot of the aspects of rules in Total Warfare–including, yes, Castles Brian.  Only when you hit Strategic Operations does there appear a rules expansion that doesn’t flat-out require Total Warfare; and even that system–Battleforce–is better with Total Warfare.  The only book that doesn’t need to refer back to TW is the current fifth hardcover, A Time of War, the BattleTech RPG.  My guess is the forthcoming sixth hardcover Interstellar Operations will go back to expanding on TW for at least one section. Anyways, that’s Total Warfare.  I can’t say much more about it, honestly; it’s as core to BT as the 40K hardcover is to 40K.  Tournaments base around TW, not just the intro rules in the box set.  In this, TW is increasingly like every other game out there, forward-loaded.  TW’s advantage is that it’s cheaper than most other hardcover rulebooks.

So that’s pretty much it.  Hope y’all have enjoyed this overview of BattleTech: Total Warfare.  This is All Voices Anonymous for Bell of Lost Souls, signing off.  Laterz!