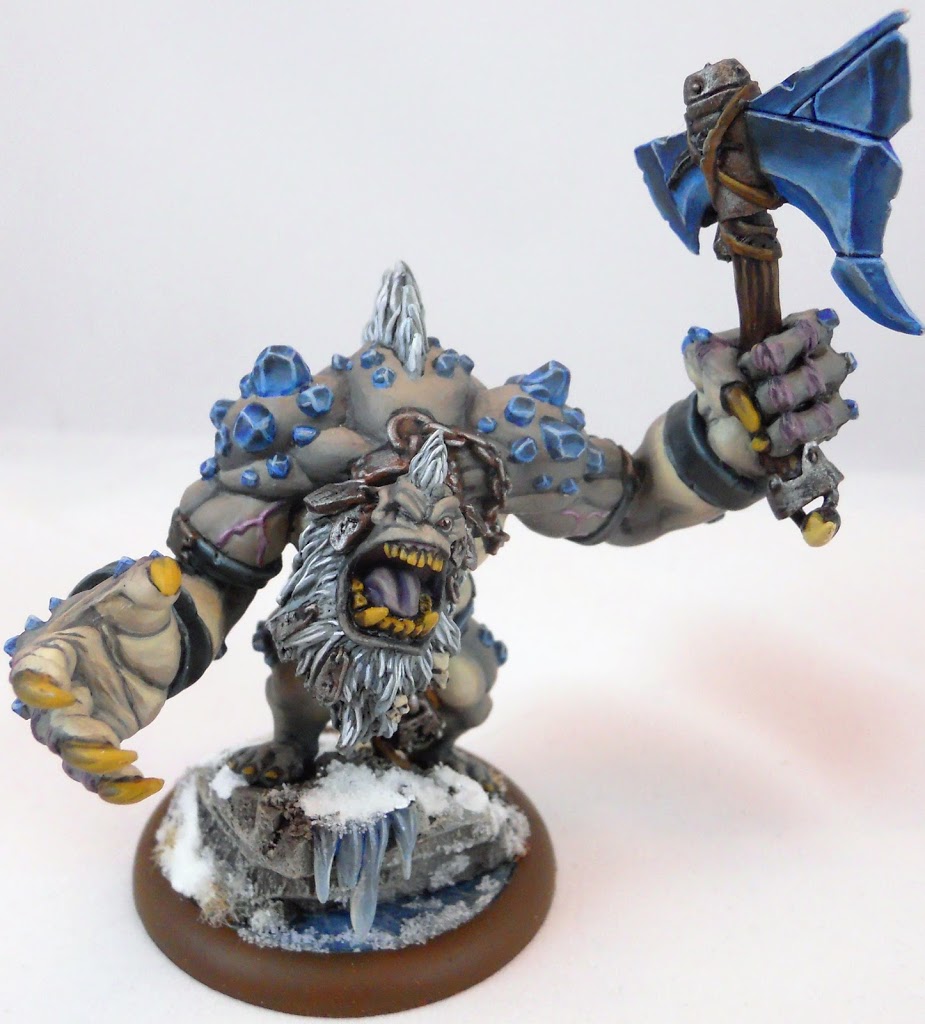 There is kind of an accepted fantasy standard when it comes to beasts with an icy or cold theme.  Lets get out our paintbrushes and get started.

Usually it involves a palette of pale blues and cool whites.  These are the colors that spring to mind when you think of Frost giants, Ice elementals, Yetis, or in this case Icy trolls. That’s the scheme I went with for my winter trolls, and it was almost the scheme I went with for Rök here. But at the last minute I decided I wanted to see how it would work if I chose to go with a skintone inspired by earthly arctic animal colors.  And of course I had to make sure there were enough blues and whites that he did get the frozen terror vibe across. A nice quick and easy way to  change up the pose for a hunched model like a Dire Troll is to have it scaling a little rock or other scenic element like I did here.  The rock is made out of blue foam, and Rök is pinned to the base through the foam to ensure stability.

The new trolls will require some green-stuffing on the back.  There is, unfortunately, an unacceptably large gap around the back piece and the torso when they are glued together.  While I had the green stuff handy I added some icicles to Rök’s little perch. I wanted to create a nice warm tone that looks like it could belong to something like a leopard seal.  Using these three colors in different amounts, I created the first of the three mixes shown below.  The one in the middle is GW’s Fortress Gray.  Like nearly all of my GW paints, this one is out of date, and I don’t know what the new color is called.  Any light gray should work pretty well for this purpose.

A little bit of Bleached bone is added to the last two color mixes to lighten them up a bit.  The final color, as well as some pure Bleached Bone were used only on Rök’s underbelly and palms, which I made a bit paler than the rest of him. Here’s our troll after being painted with a layer of the darkest color, then receiving the first round of highlights. I continue to highlight up using the rest of the colors from above. After using the Bleached Bone to finish off those pale regions, I start on other details.  I make his eyes extra bloodshot since this troll is supposed to be something of an alcoholic.  His beard gets a basecoat of Astronomicon Gray and his teeth start off as Iyanden Darksun I wash the fur areas with thinned out Badab Black, and highlight them with Space Wolves Gray.  I start the metals off with a base of Calthan Brown so I can end up making them look nice and rusty. After highlighting the fur up to pure white, I decided I’d rather on to those Dire Troll spurs.  These were the part of Rök where I really wanted to focus on the Icy theme. Achieving a crystalline effect is actually not to dissimilar from painting NMM.  In fact to start off all of Rök’s ice crystals I used identical colors to those on my Navarre Hauser.  Just like when painting NMM an easy way to get a crystal feel is to start with darker tones at the top of an area, then blend into the highlights on the way down.  I rough out the areas first. Then blend them together a bit more. After I have all those areas blended to my satisfaction, I paint a thin line of highlight down every edge. Looks like the values are about right.  Time to give it a wash. In this case that is Vallejo’s Blue Game Ink.  Its very concentrated so I thinned it down a little to keep it from going too blue. The only Ice that doesn’t get a wash of it are the icicles on the base.  I want them to look a little more natural. After the ink dries I put a few more highlights along the edges.  While the tone doesn’t actually match any earthly ice, I think I’ve gotten the effect across well enough and created a nice color contrast for Rök’s warm gray skin.

~ Then its just the final steps.Check out this article for a look at how I did the metals, this one to see the colors I used on his black straps, and this one on painting trollbloods in general.