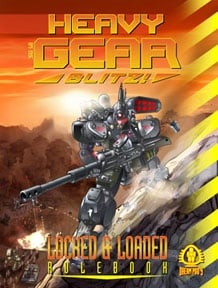 Spanky Harrison here with a brief overview of the rules for Heavy Gear Blitz!. If you like dreadnaughts, dreadknights, battlesuits, or war walkers, then this might be something you want to check out!
Dream Pod 9 has been publishing products for its Heavy Gear setting since 1994, and its only gotten better with time.
The core of the system has stayed the same. Whenever a model tries to do something, you roll a number of d6’s equal to its skill at whatever its doing (usually two), add a modifier (regularly zero), and compare it to a threshold. The most common rolls (attack and defense) are opposed, so you and your opponent end up comparing results. This tends to weight things heavily towards  the average on dice, meaning that stacking modifiers through smart play is vital.
Blitz! uses alternating activations by combat group. So each player takes turns activating a small portion of their army. However, the only thing your really limited to doing during your own activation is moving, and even that can be done out of activation via Command Points, so a model still has quite a few options outside of their activation. Even so, in practice, it seems like its usually more valuable to just wait for your own turn to do things, since you lose a lot of your ability to coordinate if you use up all your actions on reaction fire.
Movement and weapon range is handled with a tape measure marked in inches, like you would expect, and the game uses normal kinds of terrain at 1/144th scale, on a 4’x4′ table. Game sizes can vary pretty heavily, with an average army of Gears at 750-1000 TV having 12-16 models. One of the other things that’s neat about Heavy Gear is how it integrates electronic warfare and reconnaissance into the game. Too often in other wargames, “Recon” is just a code word for “fast/sneaky and fragile” and nothing else. In Heavy Gear, fast units with good sensors and communications are valuable for their ability to hunt down enemy elements and relay their location to your fire support elements. Having trouble with some sneaky stealth equipped commandos? Enemy Artillery section behind the hill getting you down? Send in the recon! Many recon units are also equipped with electronic countermeasure suites, allowing them to disrupt your opponent’s ability to spend command points or call in artillery on your models.
Now I’ve been playing/following Heavy Gear off and on for years, and Blitz! has a plethora of improvements over the old 2nd Edition HG Tactical Rules. Even better, its still improving! DP9 has been slowly but surely releasing new and updated rules for play testing in its Gear Up! E-zine, which is free via DrivethroughRPG, and are currently planning on releasing new Field Guides for the main factions sometime later this year (or so I hear).
Compared to the older rules, Blitz! has streamlined movement and defense modifiers, a greater emphasis on terrain and cover, simplified damage rules, and new rules to encourage your units to work together, like coordinated fire, and crossfire. Even better, Blitz! features detailed army lists, and a deep mission/scenario system that includes options for air support or off-board artillery.
Now I want to take a bit to talk about the Mission system for the game, because that’s where I think Blitz! is really different from just about any thing else I’ve seen. So in Blitz!, when your building your army, you choose a Priority Level. The PL is an indicator of how “important” your force is. What kind of units you can (or must) take varies based on what PL you choose. Its pretty analogous to the Force Organization Chart from 40k, except that you get to choose from 4 different ones. Additionally, higher PL’s allow for more veteran units (which can take special upgrades) and for more support, in the form of artillery, defensive bunkers, air support, or infiltrating units, ect. Thats pretty cool, but the cooler thing is that its totally possible for you to play a PL 4 army, and your opponent to be playing with a PL 1 army, and its not necessarily the worst thing ever.
The reason that all works is because of the mission system. Essentially, the more important and elite your army, the more you are expected to accomplish to achieve victory. So while you may have an army full of super elite commandos to bring against your friend’s horde of 2nd rate Gears and conscripts, you will need to achieve 90% of your objectives to win, your friend only needs to hit about 75% of their objectives to reach the same level of success. (whoever wins harder gets the actual win) So effectively, if you have a lower PL than your opponent, and you both achieve the same number of objectives, you win. Also, higher PL forces are more likely to be forced into more difficult objectives, as the objectives are semi-randomized in that you roll up a category, and then choose the objectives within that category. The higher your PL, the more likely you will be forced into taking Offensive objectives, which are generally a bit more difficult. (compare “Kill all his dudes” with “Go look at that thing over there”)
The last thing I want to mention is how well Blitz! incorporates combined arms. While the Gears are definitely the focus of the game and the setting, you can, and should still field infantry, both on foot and mechanized (or on ATV’s, or in jeeps, or on giant lizard things), and Tanks, and Striders (huge support walkers). All of these different unit types are useful in their own ways, and its entirely possible to build an army around any or all of them.
Now to be fair, the game isn’t perfect. It still emphasizes speed and maneuverability over armor and cover a bit much for my taste, and the army lists are getting a bit cluttered with some of the options and errata that have come out since the 1.1 Locked and Loaded book was released. However they have been moving things in the right direction at a pretty brisk pace, and I expect the Field Guides to address some of the few remaining issues. Also, keep in mind, I’m pretty picky, so things I might call “issues” other people will likely just call “the rules”. This is my spirit totem.
Overall, I’m pretty excited to be getting back into Heavy Gear, and am looking forward to bringing you more Heavy Gear articles in the coming months.
~ I’m working on getting my first few Jägers painted up. I’ll be writing an Article! on that process soon. So, any other HG fans out there?