WFB: To Charge or Not To Charge 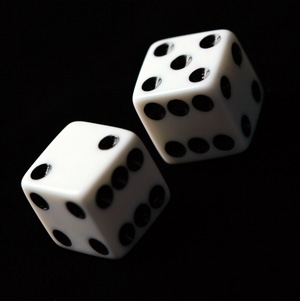 One of the most profound rules changes in 8th edition WFB is the random charge distance.  This has sparked probably the most controversy of any part of the new edition and today, I’m going to tell you how to use it.

Hey everyone, it’s Adam from TheDiceAbide.com.  I’ve heard much complaining about charging in 8th edition, and I honestly think that most of it comes from a lack of experience playing the new edition of the rules.  Unlike previous editions, you don’t always necessarily want to take the charge, since striking order is now down to initiative order only.  Because of the striking order change, as well as the change in the distance units charge, you need to have a new approach to movement, and measure the cost-benefit of each charge.

Before I start getting into my opinions on the matter, lets start with some raw numbers.  Since units will charge their movement + 2d6, there is a range of M+2″ to M+12″ that a unit could potentially succeed a charge within.  Fortunately, rolling 2D6 in WFB is incredibly common and most people are familiar with their odds to succeed a LD test, if you’re testing under 7, you’re going to have a bad time.  The same math works for charging, as does the math for Cold-blooded leadership for swiftstride units.  Just so that you have the information at your fingertips, these are the odds of you making a successful charge:

Understanding this is very important because it will help you make an educated guess.  Most people consider a M+7″ charge to be safe, because 7 is the average of 2D6, but as you can see, that’s only a 58% chance of success, which logically means a 42% chance of failure, which is pretty unreliable actually.

So how do we use this information?  The answer is actually fairly simple, since you are allowed to measure the distance to the enemy when you move, all you have to do is be sure that you aren’t moving into a distance of the enemy that you are willing to risk.  For example, if you end your movement within 12″ of an enemy unit of chaos warriors, they have a 42% chance to successfully charge you.  Since you will also know the movement rate of your enemy, as well as your own units, you can use this to your advantage to hedge your bets, for example:  I move my unit of Ogres to be within 13″ of my M4 enemy, if they want to charge and deny me my impact hits, they will have to roll a 9 or higher, which is only a 28% chance of success, while I maintain my 58% chance to successfully charge them in the following turn.
Hopefully so far I haven’t said anything super enlightening (I hope), since that’s all just understanding math and statistics.  But how do you handle charging in a more subjective light?
Choosing your Target
When you are making an educated guess about charging, after you determine if you have a reasonable chance of succeeding making it there, you need to figure out if you’re going to be able to actually win the fight!  Usually, before declaring a charge, I’ll run some math really quickly in my head, one key importance is keeping it simple enough so that you don’t confuse yourself.  For example, my unit of 8 Ironguts is about to charge into a deep block (5×8) of Halberdiers with a Warrior Priest.  I know that 3/4 of their attacks will hit, plus the warrior priest may have an extra swing in there too, so running some quick math, you will probably face about 12 attacks, 8 will hit, 4 will wound, meaning that you’ll most likely lose an ogre before swinging.  In return, I will have killed 3 on impact, then 28 attacks, 14 hit, probably 11 wounds, meaning a total of 14.  You’ll notice that I don’t use any fractions and I tend to round any remainders in favor of the enemy, which makes it a little safer.
After you’ve determined that you’re in a good range to charge, and you think you’ll probably win, you have a couple more things to take into account.
Stubborn/Steadfast/Unbreakable: Just because you win doesn’t mean it will be an eternal victory.  Often times you’ll discover that charging will leave your flanks exposed to the enemy.  If the enemy is going to be steadfast, which is usually pretty obvious before the fight even begins, you need to keep an eye on the other enemy units.  Will you be in their charge arc?  Worst yet, will they be in your flank?  If the answer is yes, and you don’t have any redirectors to stop them, you’re probably going to charge into a trap.
Overrun: When you are using a frenzied unit, you MUST overrun, so it’s important to pay attention to what you’ll be overrunning into!  Sure that squishy unit in front was delicious, but if you’re overrunning into a blender, you should probably reconsider.  Also, if your unit doesn’t have frenzy, but will otherwise be left out in the open to be shot up or charged unfavorably, you may want to think about it a little more.
Charge Bonuses: Sometimes you may want to risk a charge because the enemy has a bonus for doing it themselves, like lances, or impact hits.  If you take the charge, you could deny them the bonus and end up tying them up in combat long enough for help to get there the next turn.
Failing a Charge (with style!)
When you look at that cavalry, sitting 13″ away from you, you know that they have a 90% chance to successfully charge you (M7+6″), but you only have a 28% chance to charge them first.  If the enemy doesn’t really have other units positioned to counter you, and you know you’re going to take the charge one way or another, it can very well be worth the risk, after all, that’s a 28% chance that the enemy wont get the bonuses for charging a unit that they were going to charge anyhow!
Another reason to fail a charge, is that it’s in the way of something else.  The rules for WFB say that you cannot declare a charge which would be impossible to complete.  This means that if you were using a redirector to protect your big block, but now it has a juicy target, you need to figure out a way to make the charge possible in some way. The easiest way to do this is have your charge redirector declare a charge against something that is as far away as possible, but still in their range.  You will probably fail the charge, but the distance they move from the failed charge will likely open the door for the unit behind to succeed in their charge.
In all, I believe the addition of random charge distances has greatly improved the game.  In days before, you could simply park your unit a short distance out of the enemy charge range and there would be no risk.  The more you have to weigh the odds and really think about the risk involved in a maneuver, the more you will have to adapt to the situations that arise on the battlefield, and ultimately the better general you’ll be.  The removal of striking first for charges also takes charging from being a no-brainer, to something where you really need to analyze the rest of the battle and the surroundings to determine if a charge is worth it’s inherent risk.  Hopefully I’ve provoked a bit of thought for you, and maybe you’ll take a few more or less charges in the future.