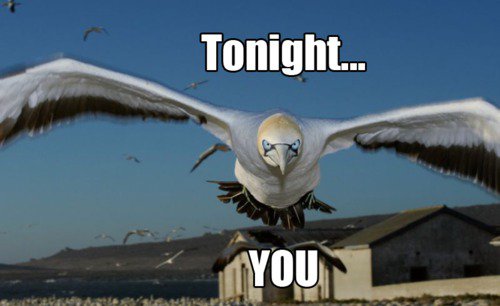 Goatboy here on my normal Monday schedule with some 40k thoughts.  I want to talk about diversifying your threats.

I read a lot of stuff online.  In between working on reports and fixing internet issues I am usually seen traveling the toobs to find interesting 40k nonsense.  Most of the time I look for conversions but there are times I decide to jump into a battle report.  These reports normally consist of some kind of copy and pasted army that tries to “grind out” a win through consistency and redundancy.  I usually read them and think to myself –

So yes I know I seem to have been or am or whatever you want to call as the poster boy of boring net lists but I rarely bring that sort of nonsense to the table.  The reason I have been slowly moving away from that is due to the idea of creating a lot of bad options for your opponent to pay attention too.

Control Both Turns
Lately I look at the game from both sides of the tabletop in order to help create an interesting set of turns.  This comes from the idea that if you can control both turns you can still win – even through a sea of crap rolls.  It seems most of the time people think of the game in a flat field of 1’s and 2’s that add up and create excel lists that only cause your frustration as the amount of dice rolls needed to make the correct average is more then you see in a normal game.

Divergent Threats > Spam
So that is why I am championing the idea that you create armies with different levels of threats that make your opponent make tough decisions.  When I see lists with 6 copies of the same unit I know that really the only decision I need to make is to kill the one that either isn’t in terrain, is the closest, or the one on the objective.  This isn’t very exciting as it just comes down to you rolling dice, creating the math in your head, and hoping your opponent’s duplicate unit rolls some 1’s or 2’s.

The “Kitchen Sink” List
Let’s look at a list I am thinking of for newish tournaments.  I want to try and create as much of singleton list as I think you can do it and still make a competitive list.  I did alright for Feast with this type of list and I think anyone can do it with a little bit of planning and smart design.  I know some lists can’t do it due to their limited nature of Troops but let’s look at creating all levels of threats in an army list. Today I want to use Chaos/Crons.  The two newer books that do really well together and haven’t hit the “internet level hate” that some of the other army lists combos do.  It is easier to create multiple threats when you Ally up as you have two entire books of choices.  So let’s look at a 2000 point list.

So yeah this looks like a crazy pile of nonsense if you saw it on the table top.  That is the point as it creates a bunch of bad options for you to choose from – and that will force errors on my opponent’s side.  It also has enough scoring to be ok but I am thinking a set of smaller Zombie units might be better.  Still it is an interesting mix up of different things that all work together to create a tough time for an army to truly engage and win.

You have 2 units that can hit fairly hard and still remove whatever they are playing against.  Scarabs when paired with another hard hitting unit means that they might not get completely killed before they can do something.  Let’s break down each options use.

Typhus helps activate the zombies which will help with a really fat annoying fat butted objective holder.  When I read that they can hold objectives I knew I needed some zombies to run around.  Typhus isn’t a slouch either so it helps.

The Chaoslord is somewhat redundant as it activates the Plague marines.  I think it might be better to have a Sorcerer as you can basically make the same sort of option but gives you some really interesting psychic options.  Biomancy could be good on the spawn or bikes but I am really interested in using Telepathy.

The Destroyer lord gives the Scarabs a bit of bit as well.  You could drop the Scarabs for a regular lord and some Crypteks but something about the ultimate Hater is interesting.

I didn’t take anything but you could look at putting in a Deathmark combo if needed.

Zombies – yeah you know what they do.

Plague Marines are another hold back unit.  Plasma gives me some ability to hurt a flyer and they are hard to get rid of.  I used the sacred number because it fit.

Immortals will help pour out a good amount of damage at a unit when they pop out.  At a 10 man unit they should survive some attention especially when the entire list is designed to confuse.

The Warrior unit is just there to get another troop option that can easily get Line Breaker for me.

Chaos Spawn are there to get my Black Mace into some nonsense.  They also are fast, can hold a unit up and keep things from getting to your zombies.  I like armies that plan to play all the turns and creating fast and engaging units is the way to go.

Scarabs are another option to do the same thing.  They can get stuck in, hold a unit up, and leave your opponent with only a few turns to move to hold an objective or get some points.

The Heldrake is bad ass and I really like to always have one.  Two is pretty good but at 170 points a piece and no real way to contest in some Tournament missions.  Still it I like how it can get on the table and kill a small “scoring unit” and treat it for a terrible date.

The Doom Scythe is there as a clean up and kill armor 14 nonsense.  Yes the Scarabs can do it too but the Doom Scythe can hopefully kill it quickly.  Plus who doesn’t like a beam of doom hitting things.

Where’s the “Weak Spot”?
So here is a list that begs you to try and kill the “key” of the list.  All the pieces seem to work together and move towards the same goal without just being a rehash of a copied unit 6 times.  It really is annoying to look at these lists but I know I am at fault for starting some of this too.

What kind of singleton lists have you guys made?  Have you started to diversify your options in hopes to create interesting situations and drive the “cinematic narrative forward.