40K Beyond the Cover- The New Dark Angels Codex 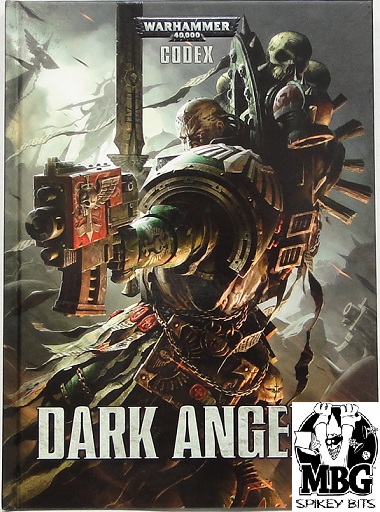 Well I had a chance to really sit down with the new Dark Angels Codex over the last few days, and get a real feel for the new book, its’ format, and the army itself.

First off, the book itself is 105 pages long, and written by Jeremy Vetock.  To me, this thing is pretty well written, and full of fluff both new and old.  It is also the second Hard Cover Full Color Codex for 40k that has been released, again with a $50 MSRP.

The codex itself is divided into four sections; The “Dark Angels” (fluff section), the Unit Entries in the “Unforgiven Section”, followed by The Armory of the Rock (wargear), then an obligatory painted model showcase to inspire us in the “Sons of the Lion” section, and finally the “Angels of Death” which contain the Army list itself. Fluff wise, it seems now Luther has been dubbed the “Dark Oracle” and while still being entombed in the middle of the rock, spouts off all sorts of nonsense that the leaders of the Chapter try to decipher, as they continue to hunt the fallen.  I also really liked the bit about the rock being piloted by a “Master of the Rock” a Techmarine that’s hard wired into the asteroid and controls its’ vitals.  I have to admit I couldn’t help but start making a bunch of Sean Connery “welcome to the rock” voices in my head after reading that.

Overall the fluff accounts for about 26 pages before sliding into the “Unforgiven” section that focuses on the unit entries (each of which also contains even more fluff).  It’s worth a read first, for the new unit types like the Deathwing Knights and such, but the meat of the book is in the Amoury which starts at about page 62. The Amoury has a ton of new and unique wargear, banners, and weapons systems designed to aid the Dark Angels in the fight against the Emperors foes, while maintaining their hunt for the fallen.  My favorite so far is the Ravenwing Grenade launcher, which may bring multi-wound and feel no pain MEQ to their knees.

Next up is the army list itself penned the “Angels of Death”, which takes up the last fifteen or so pages.  This is where you’ll find all the points and options that the new Dark Angels can take!  One of the biggest changes I noted so far to the old standby units are, (maybe in an effort to make sure they are fielded even at all perhaps) that the tactical squads can not only take Plasma Cannons one per ten marines but they also have access to Rocket Launchers with Flakk ammo for what I consider a steal points-wise!

There also seems to be quite a few fully functional field-able lists within this codex, but the one that the author seems to push the most is a combined arms Ravenwing / Deathwing Assault army.

Being able to choose which of the first two turns the Deathwing can arrive, coupled with the fact EVERY Ravenwing biker has a teleport homer I think will be the foundation for quite a few lists well be seeing shortly on the table-top. Splash in some specialized banners than confer some great abilities (like bolters shooting four times, or giving your models Counter Attack or Feel No Pain), and by the time you get around to choosing an HQ, his special rules may just be the icing on the cake of a great well rounded all comers army list!

This book is not without peril, however as there may be an interesting typo in the Ravenwing Command Squad entry on page 96 that seems to prohibit them from taking one the of sacred standards of battle? Either I am an idiot, or well be seeing some great debates over that one real quick.

The book wraps up with a great fold out reference guide in the back of the book to help for quick rules questions, and maybe to help preserve that beautiful book spine as well!

Well that’s just about it. Be sure to bone up on the Blind, Zealot, Crusader, Skilled Rider, and Salvo special rules before you start reading, and you’ll have a great time with this book.