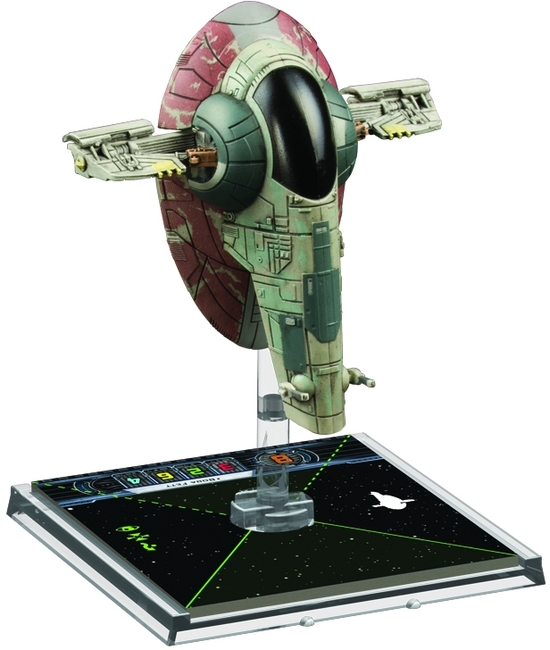 Continuing with the trend of looking at the fancy new ships coming up for X-Wing from Fantasy Flight, lets take a look at the second most popular ship know to Star Wars: Slave 1.

To start with, its a large ship, just like the Millennium Falcon. Outside of that it follows all the other normal rules and such. But unlike the Falcon, instead of firing from a 360 degree arc, it only fires from the front as well as the rear.

Like the Falcon though, it comes with a bunch more fun stuff including more co-pilots, missiles  ship upgrades and some new stuff only for the Slave 1, at this time at least. Those being two weapon upgrades as well as another brand new card type, Bombs.

To start us off again, this baby comes with four pilots as well, a skill 8 Boba Fett, a skill 7 Kath Scarlet, skill 5 Krassis Trelix and to round it off a skill 3 Bounty Hunter. Co-pilots this time around are a bit…iffy I’d say. They aren’t to bad, but they don’t come off as too good either. You’ll see what I mean later. But they consist of a Gunner and a Mercenary Copilot. Upgrades are less this time around, but extremely powerful non the less. It comes with just one, called Stealth Device. Not to shabby. And again like the Falcon, in order for it to be the named ship you have to pay for the upgrade, which this time around isn’t to bad at a the low low price of FREE! New for this ship are some fancy little guns. The Heavy Laser Cannon and the Ion Cannon. Yes, you read that right, Imperials will now have the fun of Ions in one easy to use gun! Another new addition to the game are Bombs. Slave 1 comes with two of them, the Seismic Charges and Proximity Mines. They have fancy little templates to go with them and super easy to use. Nothing complicated at all. Rules state how to place, and to check the card for how they detonate. Slight problem though. Unless I did miss something in the rules, there is no damage on these things. I talked to a guy who ran my LGS Kessel Run and even he was confused on it. So, for now, Bombs are a crap shoot and point waste. Hopefully Fantasy Flight has noticed this and when the ship is released they’ll have fixed this. And to round it off we have some new missiles and Experienced Pilot skills. Returning here are the Veteran Instincts and Assault Missiles, but new this time around are Expose and Homing Missiles. Now lets cut to brass tacks here. Slave 1, I have a feeling is gonna be way better then the Falcon if used right. Regardless though, this is gonna be one ship you want to get your hands on. Each pilot ability is pretty good and the stat line for this ship is nothing to laugh at. Three shots, two agility, six hull points and four shields across the board with focus lock on and evade all standard? Yes please! Prices aren’t bad either. Expensive as all hell for you Imperial players, but look at the Falcon then shh!

The weapons it comes with as well are also pretty narly, with the only downside being you can’t fire them from your rear. Other then that the Slave 1 is a amazing ship and I’m slightly jealous of all the Imperial players who are gonna use this. Only downsides to this ship is that using certain upgrades with certain pilots can be contradictory  but other then that you can’t complain.

Each Pilot has something nasty to throw around and are just awesome. Do I sound like a broken record yet? Boba Fett can just decided ‘No, I don’t like the way I was going to move, so I’m just gonna do this instead!’ Great way to get out of bad situation since most ships will move before him.

Following up is Kath Scarlet with his ‘Oh, you ignore my crit, let me just stress you out!’ This ability actually helped me win my Kessel Run (was in second, both Rebel, my opponent chose to play Rebels). And Krassis Trelix, a free re-roll on an secondary attack? Not to shabby if you ask me. Make sure you get that Ion off or do some real damage with the Heavy Laser Cannon.

Speaking of those weapons, how can you complain? First off Ion Cannon. Who doesn’t love Ion Cannons? I know I do! This one follows all the normal rules for the Ion effects, but unlike the Turrets the Rebels can take, this one isn’t a 360 arc. But hey, some Ion is better then no Ion right? But that Heavy Laser Cannon? I can’t say anything bad about it really. Four shots at 2 to 3 is great, and when you’re in the 1 range, blast regular and you’ll leave whatever your targeting in a heap of space junk! Just don’t try to use this thing with a particular copilot (Seriously Fantasy flight, why did you put them together in the Kessel Run?). Also with the Slave 1 upgrade, you’ll be able to bring some Proton Torpedo  So you have so much nasty to bring to the table with this thing you won’t know what to blow up first!

Another amazing segway into the Copilots, these two are, well, the only meh thing that comes with the Slave 1. Gunner is like Luke Skywalker, confusing at first, but after talking to others I think I was right in my original thoughts, if you use the reroll to attack after missing, you stop attacking Period. So when coupled with a high skilled Pilot, you better make damn sure what you’re trying to kill is worth it since the rest of your fleet will just have to sit there. Now on the opposite end the Mercenary Copilot isn’t that bad. Free Crit at range 3 isn’t that bad, just situationial  And as stated if you couple that with the Heavy Laser Cannon, you’re gonna have a bad time.

Running this ship is kind of a challenge though. Each thing is so good its just hard to choose. But, since technically in the end you do have to choose, I think I’d run Krassis Trelix. Yea, you know Trassis Trelix…yea…anyways take him for a decent pilot 5 and hand him a Heavy Laser Cannon so you can deal so much Death from afar. Thanks to his free re-roll of one die, you should be able to wreck some face, even if its just a tiny bit.

Maybe throw on the Stealth Device, or take a Shield Upgrade from the Falcon set. Also if I had some more points I’d more then likely take Kath Scarlet. Throw on a mercenary Copilot and stack on some missiles and maybe some torpedoes  Or just be a jerk and take Boba and constantly screw over my opponents carefully laid out plans and just go where I feel like.

Honestly, I can keep going on about this ship. I passed up on it because I mainly played Rebels thus I wanted the Rebel ship. But I love the Slave 1 and I love me some Boba Fett. No really, I have Jeremy Bulloch’s autograph on a old Power of the Force toy.

When this ship hits the shelves any time now its a must have in my opinion. And again, thanks for reading and have yourself a great day.

So, really if you could only have one, Falcon or Slave 1 (this is the gamer equivalent of the Ginger – Mary-Ann question)?