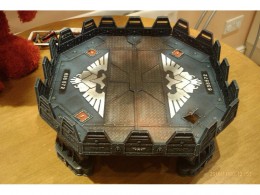 Lately I’ve been thinking… it’s entirely possible I’m a recovering tournament player.  This is a distressing thought, and one I won’t go into entirely in this post.
Except all this new niceness and concern about balance and fair play is stressful.  I’m worried I’ll be a better person or something.  Sickening.

It doesn’t mean I won’t attend tournaments – quite the contrary, there’s nothing like them – but my ideas on army selection are evolving.  For purposes of this article, I thought it would be worthwhile to take another look at Fortifications for Warhammer 40K.

The Aegis Defence Line:  50 plus upgrades.

This is obviously the one we’re all familiar with.  Frankly, the only knock against it is that it’s almost an auto-include in a tournament army with any sort of infantry or vehicle firebase.  What’s not to like about a 4+ cover?  2+ if an infantry unit goes to ground.  The common use here is for a Guard squad to hunker down then attack in the following turn via an Order.

It’s usually upgraded to include the Intercepting and Skyfiring Quad-Gun… which can’t fire on it’s own.  Sorry!  But I’ve seen Scarabs rush across the field to fire one; my guess is they hacked it. The Skyshield Landing Pad:  75 plus upgrades.

There’s a really nifty article about the Skyshield on Spikey Bits; my understanding is he ‘borrowed’ it from APOCalyptic, so this LINK will send you directly there.

The model has two configurations, Shielded or Unfurled.  With Shielded, the walls are up and the units on the pad gain a 4+ Invulnerable Save.  That’s the important part – it’s NOT a cover save, so give the finger to the local Flying Chickens and take the time to shoot them out of the sky.

But this really isn’t what interests me; Unfurled, Deep Striking units won’t scatter.  Further, Jump Packs, Jet Packs, Jetbikes and Skimmers don’t have to worry about Dangerous Terrain tests… since these are the units you’re probably Deep Striking, that’s a nice thought there.

My first thought for this unit is choosing its placement carefully, for advantage.  If this means consistently forwardly placed – that is, outside of the deployment zone – I’d probably invest in some cheap Infiltrators to hide underneath, denying it easily to your opponent.  With that in mind, it would complement Dark Angels Terminators nicely.  They can come in Turn 1, then raise the Shield to increase their Invulnerable Save from 33.33% to 50% – that’s telling over the course of the game. Grey Knights could make use of it; there are a number of units that benefit from Deep Striking, including the Nemesis Dreadknight with an Personal Teleporter.  Blood Angels Jump Infantry… it’s nice to Deep Strike close to your opponent, but waiting a turn before getting into the thick of things can be problematic, right?

Hang out.  Get a tan.  Keep in mind, as the article I linked to points out – brilliantly, with pictures – it can actually be difficult to draw line of sight to units that aren’t flush with the edge toward the enemy, due to the bad angle.  This is particularly true when the cover is raised into the Shielded position.

Lastly, not that the Necrons need help, but there are a two ways to get ‘teleporting’ troops that come immediately to mind; my favorite is Vargard Obyron with a Tesla-armed Immortal squad.  Keep an objective close to the Fortification with the idea of coming home as-needed. The Imperial Bastion:  75 plus upgrades.

Again, I won’t belabor the obvious here; this is the second most common Fortification seen.  This is a better way to protect units in the backfield than the Aegis Line, assuming you’re only looking to protect a unit or two.

Recently I’ve seen a Vindicare Assassin hanging out, firing an upgraded Icarus Lascannon.  With his (or hers, I guess – it probably happens, since gender bias doesn’t exist in the 41st Millennium) special rules, it’s what people cooler than me used to call a “sure thing.”

I wasn’t always this hip.

The Vindi fires using Interceptor in the enemy movement phase, then graciously uses his Exitus Rifle in his own phase.  If you’re not facing an army where Interceptor will come into play, then it may be worthwhile to yield the gun – but it’s an option.

It isn’t hard to imagine that the Tau will make great use of liberated Imperial Bastions – or maybe the Earth Caste can develop their own..? The Fortress of Redemption:  220 plus upgrades.

This is by far the most underused and under appreciated model in the game.  Okay, it’s the price of a Land Raider, because face it, you’re going to upgrade to the Krakstorm Missile.  There are three Bunkers, two small and one medium, as well as a walkway.

You can develop a strategy around this, surely?  Especially with how prevalent gunline armies are right now.

The placement is the thing.  You may know this, and frankly it’s cheesy outside a tournament environment, but this model is so large you can cut off a good chunk of one quarter.  Place an Objective Token here and it will be very, very difficult for someone to fight through to.

Here’s a completely different idea.  A Tyranid player I know placed it forward, toward the middle of the board, and pushed his units flush with it.  His Tyrant Guard settled into position, out of sight but still hitting hard, and his Monstrous Creatures set up to steal around either edge and get the leap onto the enemy.  This might not sound worth 220 points, but think of the value of stealing away your opponent’s best shots…

That’s that!  Another Terrible Tuesday Wednesday come and gone.  Thanks for playing, but it ain’t over.  What’s your favorite use of Fortifications?  What’s the best use you’ve seen?  What’s the worst… meaning most cheesy and brutal?

As an aside, I get there’s a certain level of disconnect from the opening – bemoaning a broader, more fluffy worldview – and the content – the somewhat-seeming WAAC uses of Fortifications, I can only say, “Hey.  It’s a process.”

But answer me this… why isn’t GW producing more of these?  Certainly the Xenos breeds can take advantage of cover, right?  And isn’t there someone out there who has converted a Fortress for a non-Imperial army?