40k: Community Opinion – What is Spam? 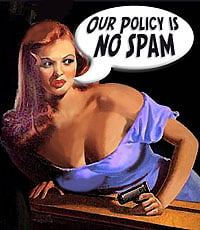 Mercer from Imperius Dominatus here, and one of my pet peeves is all these silly terms the Internet has introduced into 40k – like the dreaded SPAM!!!

As mentioned above, I do not understand the hate spam gets, though I do appreciate why people may dislike spam armies. Seems most my armies are spam based then I am pretty biased in the favour of spam armies – after all YOU buy for these plastic toy soldiers so you should be able to play with whatever you like without the back lash from other players/haters.

I have heard people cry out against spam saying it is boring as it all looks the same etc and complain you do not get to see the variety of models. A quick news flash; real life armies look the same – they use multiple of the same vehicle and have the same uniforms, well more or less. Plus if you want to see different models then you buy them or look at them online or something, not complain at someone on their choice of models because YOU want to look at something different.

I also do not understand why a Deathwing army or Ravenwing would be accepted (both armies spamming the same type of units) yet something like a Dark Eldar Venom list is hated. I know people will argue that Deathwing and Ravenwing are fluffy, but read the Dark Eldar background on Venoms – there isn’t one or two of them in an assault there’s a ton of them!

However, the point I appreciate that spam haters make is the fact spam armies can get boring. Yes I know what I said about who buys the toy soldiers etc and that point still stands. What I appreciate is it gets boring is because playing the same spam over and over again. For example I have been playing a lot against Tyranids lately, this is due to the fact I am playing the same person often and not playing other people – this is due to my own reasons so don’t take this the wrong way anyone. When I finally did play someone different guess what army they had? You got it, Tyranids! While both lists were very different I was still playing against Tyranids and in many cases the lists had the same units i.e Hive Guard, Tervigon, Flyrant etc. The same could be said if you keep playing against a Ravenwing army or Deathwing army.

So I appreciate where spam haters are coming from. I guess you can say I do understand them and perhaps the better word is I do not agree with their spam hating.

Mercer, Get to the Point!

You’re probably thinking what is this douche bag waffling on about again, well there is a point. Some time ago someone in the Imperius Dominatus comment box challenged me to make lists without spam and I am eager to take up this challenge. Though in order to accept this challenge I need to find out what spam is and also along the way try and understand why people do not like spam armies.

I personally believe spam is anything more than two units or perhaps three units, take troop choices for example who rarely only have two choices. But I think the community’s opinion is what counts.

So far there’s some interesting opinions on Imperius Dominatus on what counts as spam; I’ve even heard someone say Doom of Malan’tai is spam! What do the BoLS readers think spam is?

The question which I ask my beloved readers is what do you think is spam? and we want to hear some concrete rules – not any of this “you know SPAM when you see SPAM” stuff…