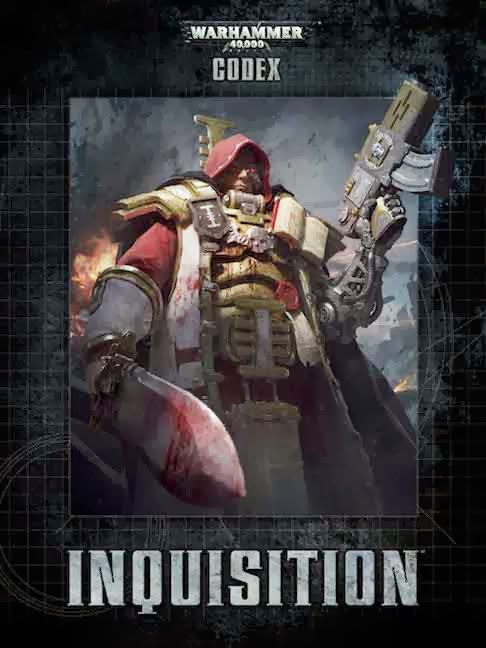 The big news this week was the release of the Inquisition Codex. But that was just the tip of the iceberg – even Fantasy folks got a treat.

CODEX: INQUISITION
From The Black Library:
The front cover, illustrated by Marek Oken, is just one of the new pieces of artwork in the book, which focuses on the strange, dangerous and clandestine work of the Imperial Inquisition. The book talks in great depth about the three primary Ordos: the Ordo Hereticus, concerned with hunting down witches and psykers; the Ordo Xenos, tasked with the extermination of aliens; and the Ordo Malleus, who protect humanity from the Daemons of the Warp. Other Ordos are mentioned too, such as the sinister Ordo Sicarius and the unusual Ordo Chronos, who investigate (and try to prevent) time travel. The different factions of Inquisitors are talked about too, ranging from Thorians to Monodominants. Many famous (or notorious, depending on your point of view) Inquisitors are also covered in the book, including Gregor Eisenhorn, Witch Hunter Tyrus and Torquemada Coteaz.
Codex: Inquisition allows you to include an Inquisitor and his retinue in your army, be they Space Marines, Imperial Guard or even Xenos races. There’s unique wargear in the book, such as the Liber Heresius and new Warlord Traits which can help you define the role and personality of your Inquisitor. Are they readers of the Imperial Tarot or collectors of forbidden Xenos technology? There are also full rules and points for building an Inquisitorial retinue, including Acolytes, Arco-flagellants, Jokaero Weaponsmiths and plenty more besides.
The digital codex is available for pre-order both as an interactive edition for iBooks, and as an eBook edition for your phone, tablet, computer and eReader. What is fascinating that the Inquisition is not only an army unto itself, but can be fielded as an  “Inqusitorial Detachment” IN ADDITION to a normal allied contingent!  This is going to make for some interesting army builds… The Iron hands supplement Clan Raukaan is  out. Here are details:


From The Black Library

Clan Raukaan is the second supplement for Codex: Space Marines, following on from Sentinels of Terra last month. The main focus of the book is the 3rd Company of the Iron Hands, but this is also by far the most comprehensive look at the background of the whole Chapter we’ve made yet, covering their 10,000 year history of battle in the Emperor’s name.
The Iron Hands are famous for two things: their reliance on machines, and the fact their Primarch lost his head in the heat of battle (literally and figuratively).
The new rules in the supplement represent both, with alternate modes of army selection allowing you to call on the armored might of Clan Raukaan, and Warlord Traits that mean your commander either embraces his Primarch’s legacy of battle fury, or has learned from his mistakes, and approaches battle with a cold, murderous logic. There’s also an impressive new arsenal of relics, fit for the champions of Medusa.
One of our favorite parts of the book is the Echoes of War section. These missions allow you to recreate famous battles from Clan Raukaan’s history.
One in particular caught our eye – Ambush on Skarvus – where the Iron Hands take on their ancestral foes: the Emperor’s Children. What’s particularly cool about this mission is how the artwork and photography accompanying it really capture the bitter struggle between these hated foes. Some interesting Apoc rumors this week.

There has been lots of chatter of a followup book for Apocalypse that will not only provide rules for bringing superheavies (or a small carefully crafted selection of them) into your ordinary Warhammer 40K games.  It is also said to be a platform for the release of some new fortification kits.

There will be new Apocalypse kits coming in plastic to increase the range, both Xenos and Imperial.  So far we have:

We saw those last two introduced  together with Apocalypse 2.0  A further supplement with fortifications and 2 new plastic Apoc kits in 2014 would exactly mirror the pattern from this year.

But then it got strange…

Because if you look at that list of plastic Superheavies and wanted to add 2 to spread the love around between the major armies in the game there is a big white elephant in the room isn’t there?

Then stuff like this started to show up from multiple sources:

-Plastic Thunderhawk – 2014
-Not an exact duplication of Forgeworld’s kit due to the need to streamline for a limited number of sprues and boxing size limitations.
-Additional weapon hardpoints and weapon options compared to the Forgeworld kit.  Look for weapon hardpoints and options from other Space Marine flyer kits for clues.
-Multiple T-Hawk sub-variants can be built from the kit. ~editor’s note: Forgeworld only offers the “standard” and “transport” versions, unless this is referring to things like Marine, Grey Knight, Inquisition, CSM variants…The Thunderhawk and other(s) plastic Apocalypse kit will be the featured new models in the 2014 Apocalypse Supplement.

Now if there is something that the 40K community treats like an urban legend it’s any talk of the semi-legendary plastic Thunderhawk.  Like Nessie, Bigfoot and UFOs, we all want to believe.  There have been second hand accounts over the years, always just out of touch… But this is the highest concentration and most specific chatter we’ve heard so far.
We rate these rumors as follows:
Apocalypse Stuff: Probable coming from multiple known sources
Thunderhawk Stuff: Possible coming from multiple sources, but it involves the words “Thunderhawk” and “Plastic” so we rolled it back one notch…