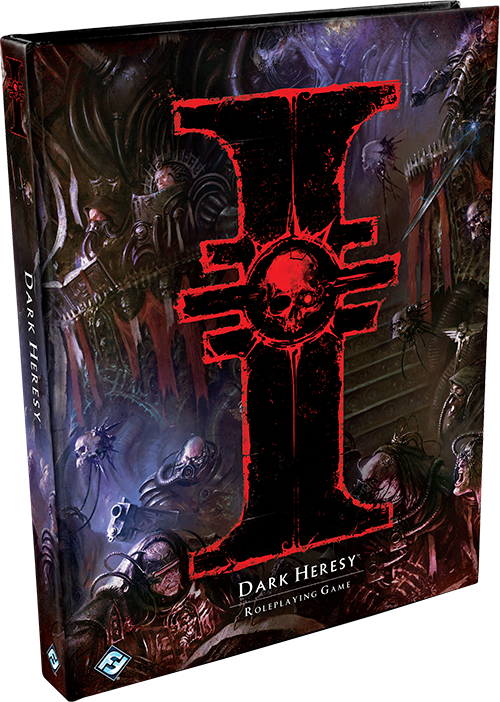 What’s New in the Second Edition?

Revised from over six years of player feedback, it also includes new rules for investigation, social interaction, vehicle combat, and more including a brand new setting for players to experience. As it shares many of the rules from the previous edition, earlier supplements and adventures can be adapted for use with minor effort.

To learn more about the role of the Inquisition within the dark and deadly Askellon Sector and the other changes made in the Second Editionplease see the game’s description page.

Dark Heresy Second Edition is a roleplaying game of danger, mystery, and brutal violence set in the decaying far future of Warhammer 40,000. Players take on the role of defenders of humanity and embark on hazardous adventures into the dark heart of the 41st millennium. As an Acolyte of an Inquisitor, you’ll serve at the front line of a great and secret war to root out dangers that imperil all of humanity.

The Acolytes of Dark Heresy shepherd Mankind from the manifold paths of damnation, with smoking boltguns or world-burning virus bombs if necessary. Acolytes cannot shirk from their noble calling, harsh as it might be, for the only thing worse than the lengths to which they may go to eradicate heresy is what might occur if they fail to act.

Their investigations take them into deadly combat against twisted mutants, powerful psykers, and other abominations. They must face the horrors of Daemons and ancient aliens dedicated to the eradication of Mankind as a species, and battle for survival amidst webs of conspiracy and betrayal. Perhaps the greatest threat they’ll face, however, is that of their fellow man, for the human soul is such fertile ground for corruption. Foul cults and insane heresies permeate all areas of the Imperium, and no
one is beyond suspicion.

The 448-page, full-color Dark Heresy Second Edition Core Rulebook contains everything Game Masters and players will need to serve the Emperor in the Askellon Sector. With rules for quick and easy character creation, combat, and all of the source material necessary for GM’s to bring the Askellon Sector and its horrors to life, the Dark Heresy Second Edition Core Rulebook can be used to run both standalone adventures and ongoing campaigns. Dark Heresy Second Edition includes new material such as rules for Subtlety, which we’ll cover in greater detail in our upcoming series of previews. The included adventure, Dark Pursuits will have players immediately embroiled in a web of intrigue and heresy.

Dan Abnett, the bestselling author of numerousWarhammer 40,000 novels such as the Gaunt’s Ghostseries, and the Eisenhorn and Ravenor trilogies, has written a short story about Acolytes in the Askellon sector specifically for Dark Heresy Second Edition! The story, Into the Dark… opens the Dark Heresy Second Edition Core Rulebook, and provides a glimpse into the life of an Acolyte, and the mysterious darkness that surrounds the Askellon Sector.

Dark Heresy Second Edition introduces a new sector for Acolytes to explore, and even more vile and insidious heresies to discover and destroy.

Askellon is an ancient region, pre-dating the Imperium itself, and its history is filled with secrets and lies that have stained every generation. As if to compound its woes, the sector is cursed with a seemingly unending Warp storm known as the Pandaemonium that has waxed and waned across the millennia. Now, it grows ever more intense and dangerous with each passing century, raging like a hungry beast that seeks to devour the entire sector and heralding the prophesied Time of Ending, close to the culmination of the 41st millennium.

On its many worlds, from the strange lands of Hive Desoleum to the lawless asteroids of Port Aquila, from the devout population of Thaur to the red forges of Cerix Magnus, all watch in fear as the Pandaemonium’s rising ferocity heralds the sector’s fall. It will take the mightiest deeds of the Acolytes to forestall this terrible doom, if only for one day.

Askellon is a major part of this new edition, as it lets us explore entirely new cultures and peoples, and also introduce new adversaries. Within the sector, players will see a host of new characters, organisations, and cults. Their Acolytes will have no shortage of heresies to investigate and eradicate.

While Askellon is the setting for Dark Heresy Second Edition, fans of the Calixis Sector can rest assured that all of the background and source material created for that sector can still be utilized to run campaigns set there using the Dark Heresy Second Edition ruleset with minor effort. The addition of the Askellon Sector does not invalidate the Calixis Sector material. Rather, the creation of Askellon simply gives players a whole new sector to explore, and new heresies to eliminate. Fight for the Imperium In His Name

For more information on Dark Heresy Second Edition, including the dark and deadly Askellon Sector and the role of the Inquisition within the Askellon please see the game’s description page. Then, in the coming weeks, we’ll explore whatDark Heresy Second Edtion is bringing to your gaming table in a series of in-depth previews!

Dark Heresy Second Edition will arrive in the third quarter of 2014. In the meantime, keep your boltguns at the ready. The fate of all of mankind rests with you, Acolyte. Serve your Emperor, and prepare to destroy heresy wherever you may find it. Never forget, innocence proves nothing.