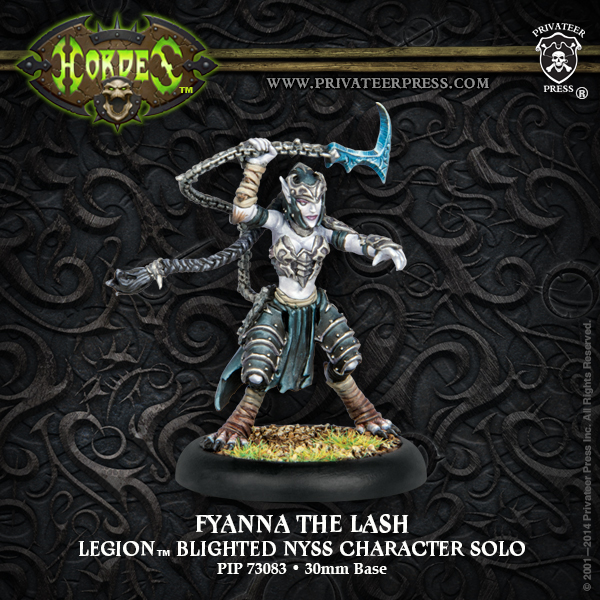 What does she do?
She whips!….Ok, so there is a little more than that to her.  With an tad above average MAT she can hit standard infantry pretty easily.  Rapid Strike is giving her 2 attacks which alone can make that 3 point cost a little easier to swallow.  Each time she attacks she can choose one of 3 attack types: Dismember , Pitch, and BeatBack.  With Evasive she is has a good chance to get where she needs to be.

Dismember with pow 12 is solid in your hordes match-ups.  BeatBack can be great for non colossal models towing zones.  My favorite ability this crazy chick has is by far PITCH.  I can only think Bosun Grogspar as having pitch on an infantry model.  He is only sporting .5 melee range. Fyanna is sporting a 4″ melee range with speed 7.  On top of that she can Pitch 2 times in a row.  This opens up all kind of crazy things she can do.

-Knock Downs!  Casters hiding behind a jack could have there day ruined by that jack being pitched on top of them.  Making easy cleanup for Ravagores and such.

Fyanna is not only pretty good in melee.  She is kinda hard to kill with.  Blasts excluded. Sporting a hefty high defense and evasive and  prowl means she is going to whip something juicy probably.

Against Fyanna:  She has Mat7 so most casters that aren’t standing next to something for her to pitch are relatively safe.  Using blasts or non targeting methods like electro leaps are the best way to mess with her.  Your normal Eyriss killing tech is going to work on Fyanna too.