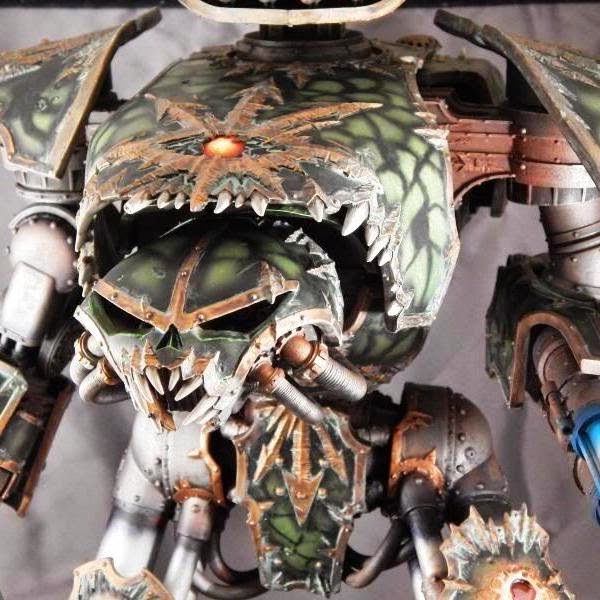 Painting a Reaver Titan was one of my dreams… even if I did not own it. Here is a little view of the one assembled and painted for a friend of mine.

I have friends which have played warhammer with me since 1st edition. Sadly, most of those first opponents live far away from my home. I still keep in touch and shoot the breeze, the funny thing is that after all this time we manage to talk about 40k a lot.

One day I received a call from Javier, that he was going to buy a Chaos Reaver Titan. He wanted me to build it/paint it for him. I was delighted to do it (still asked for a price to do this). This became an almost a year project, that I enjoyed until I had to send it to the owner.

This titan was to be blessed by the Chaos God of Nurgle. Modifications were to be made, yet he wanted them not to go over the top with pus and rot. He still wanted it to look like a Reaver Titan. The paint scheme we came to agree on was a sort of scaly/fractal pattern on the main areas with a golden but old finish to the delineating areas. Brass was to be corroded, and metal should look worn, with oily parts. Verdigris had to cover most yellow toned metals and even drain a little as weather and time had mark the titan. The grand three ring symbol of Papa Nurgle was sculpted on one knee, an painted to look somewhat fleshy. Blood and pus was made to come out of this inflamed lesion that magically appeared on the titan to shout his alliance. The base is magnetized to the feet of the titan with major rare earth magnets. This makes it for easy carrying and modulation. There are parts of a destroyed Dreadnought which appears to have been stepped on. Chaos renegade apostate preachers of nurgle and a titan tech priest were added to the base and also magnetized for ease of transporting. The main body of the titan is connected to the legs with a plumbing connection glued with resin which makes it able to be separated. The hands can be screwed into the shoulders and interchanged. You can see two other weapons that still need the screw to be put in place at the shoulder joint. The titan was a beast to assemble and serious work to paint, but the end result was better than I expected, which makes me proud to show it to you all. You can find more info on the titan at my web page minis blog: thepaintforge.com

Do any of you make a plan on how to assembled a mini before painting it, or do you just go for it and paint it after everything is in place?

Please post, I am really curious how many paint their miniature in pieces or glued.