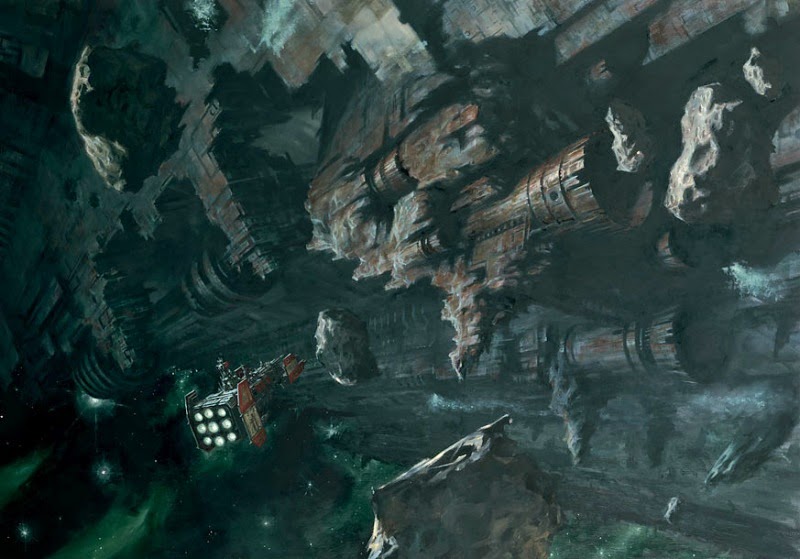 With Space Hulk drifting your way, let’s catch up a bit with the galaxy’s greatest treasure troves and traps…

SPACE HULKS
“A Space Hulk is a massive conglomeration of lost ships and wrecks fused together. They drift in and out of the warp through space and during the millennia the lost ships join together into one enormous body. Many times they are so huge that they have their own atmosphere and gravity. Since the hulks often exit and re-enter the warp seemingly at random, searching or traveling in them is dangerous in the extreme.

The Imperial Navy, and all Imperial forces and authorities as a whole, have standard orders to survey such objects and to report their location. The hulks consist of ships and items of technology millennia old and the recoverable technology can be of immense value to the Imperium, and especially to theAdeptus Mechanicus, thus elite Imperial forces are sent aboard to clear out infestations. Depending on the strategic situation (availability of troops, proximity to vital Imperial star systems, safety margins, etc) Space Marines are sent to purge the hulk of any alien infestations.

Space hulks are dangerous, as many times they are used as means of transport by certain unsophisticated factions. The Orks, the Genestealers, and the Chaos renegades use them occasionally to invade other worlds. As the warp jump of Space Hulks is essentially made in a random direction this gives them the advantage of surprise.

Therefore the mission of boarding space hulks is extremely dangerous and normally entrusted to Terminators, the Chapters’ most experienced elite who are heavily armed and armoured. In some cases this is an impossible task, due to too-powerful enemy resistance, too few available Imperial troops, too close to vital systems, etc. In such cases the bombardment and total destruction of the hulk is the only viable alternative.

Space Hulks are huge and durable, as even Nova Cannon blasts aren’t enough to take one down.”

So what chapter and hive fleet will you paint your Space Hulk termys and genestealers up as?