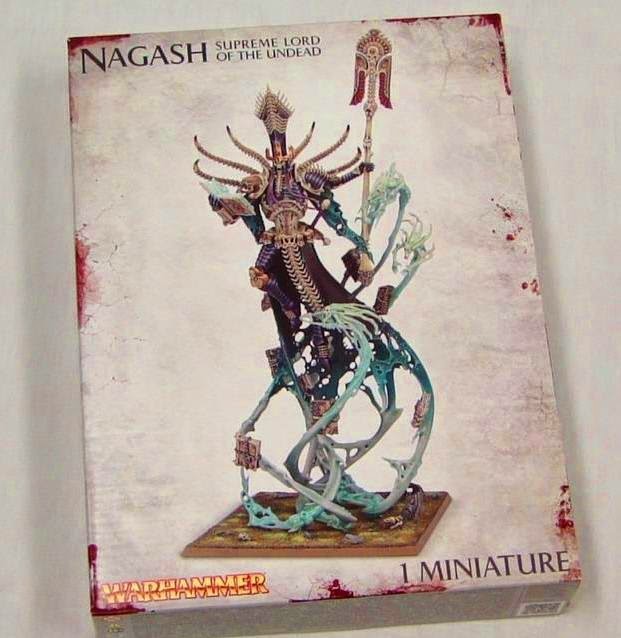 Well it’s certainly been a while since a model like this has come along. Take a detailed look at Nagash!

Nagash, the Supreme lord of Undeath is here and what a doosey of a kit this guy is. This multi part plastic kit comes with enough options to let you assemble him holding his staff of power while reading from one of his spell books, or summoning a spirt while brandishing the Mortis Blade. Both poses look great, and there is a ton of smaller details that Games Workshop added to the kit as well that really put this model over the top IMHO. First of are the swirling spirits around Nagash himself, which seem to not only add to the dynamic posing of the model, but also help mask the parts that hold him up. They also look to be holding the nine books of Nagash, and each one is detailed separately; some with elvish runes scratched out and some seemingly made from organic components. Second is Nagash himself, which seems to be the first of a new generation of models that Games Workshop can produce. Obviously we have never seen anything like him before, and after seeing the Mortarchs in this weeks White Dwarf, it’s probably safe to say this may be the new standard for GW models form now on.

The end result of all this is what I feel is a great looking dynamic model that’s both full of motion, and well detailed.