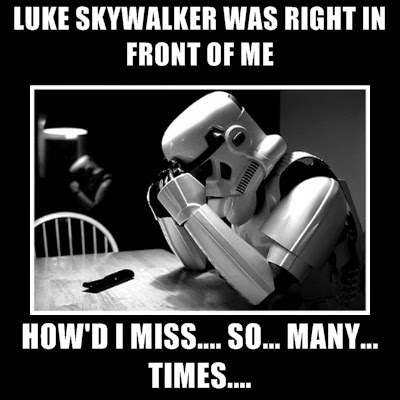 Time for another Pilot Spotlight, this time we look at some builds for the Womp Rat Bullseyeing, T-16 flying, Farm Boy himself Luke Skywalker.

Lets get right in to it and have a look at Luke Skywalker and some of the builds that are available to you. Luke is a Pilot Skill 8 X-Wing with access to an Elite Pilot Talent, his Pilot Ability is defensively focused allowing you to change a single Eye-ball in to an Evade every time you are attacked.  This lets you go a few ways when trying to fit him in to your squad.  You can continue the defensive focus and try to make him a good sized tank for your list.  Of course throwing on some more offensively minded upgrades can give you a hard hitter that can also take a shot in return or you can try to walk a balance between the two. Being an X-Wing it’s easy to over look what Luke can bring to the table especially considering the newer releases that have taken a bit of the gleam from the Wave 1 go to choice for the Rebels.

The Dial is still solid even in the age of Phantoms, the stat line is also respectable enough but it has fallen slightly out of favour with the release of the Z-95.

Coming in at 28 points the basic Luke is a little underwhelming in my opinion. its not that he is bad but I think if I only had 28 points left and was looking to add an X-Wing in to a squad I would go for Garven Dreis with R2-D6 and Veteran Instincts.  He is not as survivable against sustained attacks as Luck but with that build has the Same Pilot Skill and passing his focus token to someone else can be a big asset, but that kind of falls out side the remit of the Pilot Spotlight articles as it is more dependant on the type of List you are playing that the actual Viability of the specific build for Luke.

Taking that in to account I would rate a Bare Bones Luke at 2/5 as if you are going against a lot of low attack ships (TIE Fighters, Z-95’s ETC) the sort of free defensive focus can mitigate a lot of damage but against ordnance or a Phantom’s 4 Base attacks it is kind of a non issue. Luke and R2 are just so ingrained in my that I find it very hard to include Luke in a list and not stick R2 on him, it just feels right.

The problem come with only having 4 Green Maneuvers on the X-Wing and only having 2 shields.
This either really works or just becomes irelavent as if you are against lots of low impact attacks where Lukes Ability will do work than R2 will keep any damage that does creep through under control.  If your opponent has a few high attack ships that get to take a shot at Luke than R2 cant do much to help unless they decided to just let you fly him around for a while, which they wont…

For 32 points he does start to rack up the points but against some opponents he will be well worth it,  As an aside I do like throwing Draw their Fire on to Luke & R2 if I am running him with Biggs as being able to take a hit her and there for Biggs can really make him last a lot longer and should give you time to re-gen the shield through R2 if it makes Biggs live an extra round. For the modifications slot, as much as I like the idea of a Stealth Device for the extra Evade I do think that the Hull or Shield Upgrade is a better choice as both let you have more time to get the use out of R2.  The Hull Upgrade is obviously cheaper but if you are using R2 I would try to find the points for the Shield as if you can get Luke out for the fight for a turn or two than the extra Shield Capacity comes in to play.

If you are not taking R2 and are wanting to keep Luke (relatively) cheap then the Stealth Device can be worth while but I guarantee that it will frustrate the hell out of you when you have a few games of it being popped in one shot but on average it “should” be more cost effective that the Hull Upgrade without R2.

Luke, R2 and Shield Upgrade – 4/5 (If you can keep Luke on the fringe of the fight where you can disengage and still keep to Green Maneuvers you can get a lot of value from what is an expensive X-Wing at 36 Squad Points)

Luke and a Stealth Device – 3.5/5 When it works it really works… The Elite Pilot Talent that I am a big fan of is Veteran Instincts as it synergises really well with R2 and a Hull Upgrade coming in at 36 point.  You now have a PS10 X-Wing to go before (A non VI) Han and Whisper whilst maintaining a good level of Tankyness to help you keep R2 pumping out shields.

Predator does deserve a special mention as it helps to make Luke in to an Offensive force and a nice balance of Predator and R2 only comes in at 35 points.

R2, VI and Hull Upgrade would be my preferred build as it is fairly simple to use to full effect even if you are new to X-Wing and for this reason I will give it the 5/5

Luke with R2-F2, Stealth Device and PtL gives him 4 Evade until the Stealth Device is popped and Push the Limit can give you a Focus token to either use on Attack or Save for the roll where you only get Eye-Balls.

At 36 Points it is cheaper than some of the R2 builds but Stress management becomes an issue so it a little less point and click.

An alternative if you would like to use Luke as more of a Flanker is to swap out the Stealth Device and PtL for Experimental Interface and Lone Wolf as you lose out on one Evade Dice before you are hit but gain Re-Rolls on your Evade and Attack Dice as long as you are alone and can still stack a Focus Token with R2-F2, all for 35 points.

As Always, thank you for taking the time to read my ravings and if you would like to read more of my thoughts on X-Wing, 40K and other stuff than check out my Blog at The Dice Hate Me – Cheers Kris

I have to be honest I am looking forward to trying out Lone Wolf on Luke as it just seems like such a nice fit, what about you guys.  And of the new stuff refreshing your love for the Hero or the Rebellion?