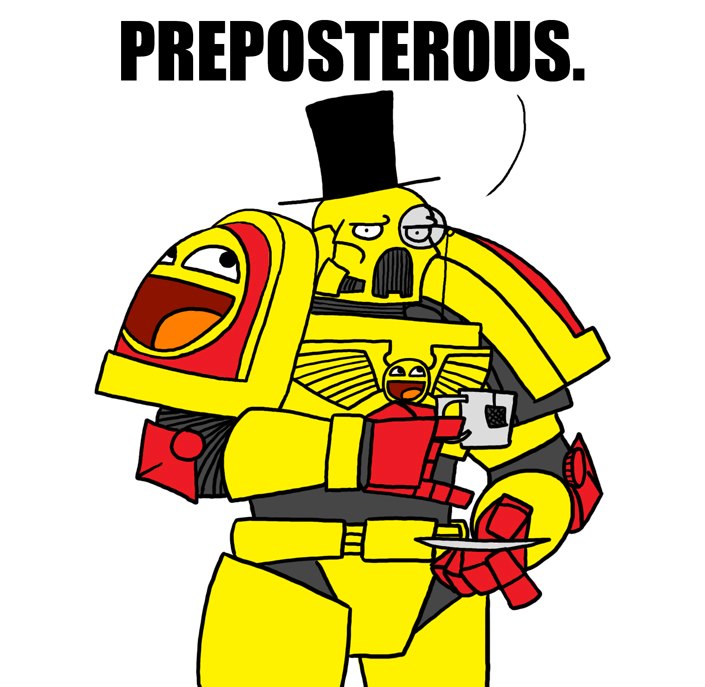 Pimpcron explores some rules changes that might make this game more realistic.

Hello all! Your closest friend and confidant Pimpcron is here to discuss the realism behind our rules. I know that some could say that if you play a game that includes Orks, a God Emperor, and ancient murderous robots, realism may not be what you’re going for. But for many of us, this fantasy world of the Grimdark is very real and very cool. The mounds of neat fluff they have written is what draws a lot of into the game; and our battles are meant to represent a small cross section of a much larger battle. So why don’t the rules reflect that?

For the most part, I am ok with the rules of 40k. I have seen other games with pretty clever rule sets, but overall this game suits me fine. But occasionally I will be fighting a bloody battle with a hated enemy, and suddenly a conversation like this springs up:

“Oh, well because the rules say so. I know it doesn’t really make practical sense in this situation, but that’s what the rules say.”

Did you see that? Going out the window just then? Yeah, that was immersion. Obviously nobody can make a rulebook that covers every possibility, and some things have to be boiled down in order for the game to progress. Some things invariably will get lost in translation no matter what setting you are in. But here are few things that have popped up in our games that we have always threatened to House-Rule into existence. We have never done it, BUT WE THREATEN! 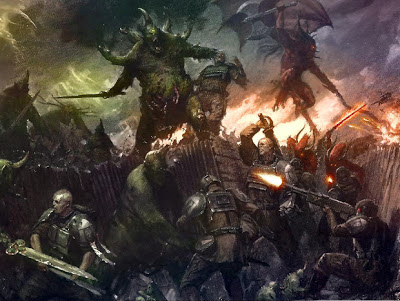 For once, I have nothing to say. This is just a really neat picture.

You roll to Hit, then see if you would wound the target, then see if his armor protects him. I may be splitting hairs here, but it seems to me that if you are going for realism you would do it this way: Roll to Hit, take your Saving Throws, then Roll to Wound. Kind of like, okay X amount of wounds got through your armor, can you withstand them through being tough? This would obviously change a lot of things like Rending, but that’s because this game was built to work the way it does and not my way. If they were to make this change, they would have to rework a lot of rules.

Blast weapon cover saves should always come from the center of the blast marker. I have a friend who cringes any time a blast weapon shoots through a window, wounds people, and they get a cover save from the wall that the weapon successfully shot through. He always remarks, “If the shot made it through the window, the wall clearly cannot block the damage. The weapon fires a shell, you can’t block part of it, if a wall blocks the shell, then nobody gets wounded. But if it goes through the window and doesn’t scatter, the wall didn’t block it.”

Okay, so you have an elite team of infiltrators who have been trained or possibly bred for this exact job. They go ahead, undetected in front of the rest of the army. They happen upon the enemy, and suddenly forget how to charge. It takes them a full turn to remember how; or work up the nerve? Or how about the elite squad who successfully outflanked the enemy and are coming at them from the side, and also get stricken with the same one-turn amnesia? Yes, I get why they got rid of outflank assaults once they gave us the possibility of a 12-inch charge. But my fix to that would be a 6-inch charge if you are assaulting from infiltrating or reserve. I would gladly take that over not being able to assault at all, like some idiot. 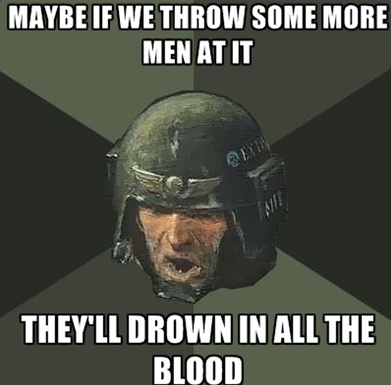 First of all, we play a game where troops are expendable above all else. Commissars literally shoot people in the head for running away. Ork blood will fill the battlefield a foot deep. Tyranids just eat their dead troops and use it to make more. Why can’t I shoot into assaults? I know what people would do immediately, lock an enemy unit in combat with a cheap unit and bombard the blob with weapons. Or tarpit an enemy unit with Terminators and barrage the blob with AP3 weapons, leaving the Terminators relatively unharmed. WHY NOT?! That is exactly the type of thing they would do in the fluff. If this was real combat, that would be a completely viable option. I say you can shoot into assaults, but any misses auto-hit your own people and you must then roll to wound them, etc. And to make it more fair, you MUST have the blast templates cover 50% your models and 50% enemy models.

So every time your Superhuman Soldiers try to get out of a tank in order to charge the enemy, they do a Benny Hill style act where two or three people get stuck in the door at the same time? I say that you can assault from all transports. But you can assault from Assault vehicles and Open-topped vehicles without disembarking; thus negating Overwatch. Dark Eldar would cry with joy if this were the case. Then drink the tears because they are kind of an icky people.

I know that some of these would drastically change the game, and most of the questions I have asked are rhetorical. Some of these are easy to see why they don’t implement them with the current rules. But it really comes down to what you want out of the game and how much you are willing to sacrifice to speed it up.

Look out for Part 2 next week!

So what are your thoughts on these rules? Like them? Hate them?

What are your House Rules you have implemented?