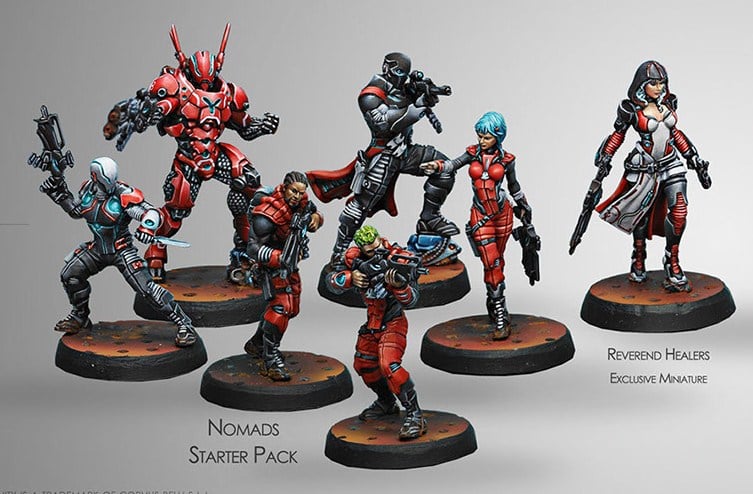 Let’s take a closer look at the Nomads half of the Icestorm starter, and see just what it is these guys do.

So you and your buddy decided to split an Icestorm starter and after a good deal of persuasion she managed to convince you to let her have the faction with the cool space knight. Well don’t worry, your new Nomads are actually the most popular faction in the game. They have cool sculpts, a fairly unique background , and a distinct playstyle. But on to the more immediate issue. What do these specific Nomads do?

Might as well start with the Alguaciles. These guys fall under the heading of “cheerleaders,” a less than flattering term Infinity players use for cheap models that are primarily included in an army to contribute orders to your order pool. But these Alguaciles can do more than just stand in the backfield and shout for the home team. For a mere two extra points, you can field these guys as Forward Observers. This ability allows them to put enemy models into the Targeted state. This state grants a bonus to any model shooting at an affected target and not only eliminates the penalty to Speculative Fire shots against them, but replaces said penalty with the aforementioned bonus. Perhaps more importantly (since Infinity is a scenario driven game after all) Forward Observers are Specialists. This means they can achieve certain objectives in scenarios. If you field them this way they also bring a Deployable Repeater which hackers can use to hack from and drastically extend their range. Deployable Repeaters are useful for all factions, but especially so for Nomads who can field some of the best hackers in the game. Other than that the Alguaciles are about as generic as it gets for Regular Light Infantry. They have low armor, a mediocre BS, and are armed with the ubiquitous combi rifle. They have no special rules whatsoever. Of course generic doesn’t mean bad. The combi rifle is a pretty decent gun no matter how you slice it and I’ve killed some important models with this seemingly lowly weapon.

The big hulking Mobile Brigada is also fairly generic, although he’s Heavy Infantry rather than light so he’s much harder to kill. His Arm is three points higher than the Alguaciles and he has an extra wound. His only special ability is V:Courage. It’s an ability you see lots of places but it’s still pretty useful. I like being able to choose whether or not I dive for cover when a guts roll is called for. This particular Mobile Brigada is armed with a Multi Rifle which does some pretty cool stuff for a model without an SWC cost. The AP ammo is great; halving armor as its name implies. While the DA ammo reduces the weapon to 1 burst, it’s awesome for AROs. He’s not the best shot with it but his BS 13 makes him a better marksman than the Alguaciles. If you find yourself close enough, you can use the Light Flamethrower without having to worry about rolling to hit. What’s really special about this guy is that he’s cheap. 39 points is about as cheap as it gets for Heavy Infantry. But you can go even cheaper and give him a Boarding Shotgun for 33. It’s fine to use this model even though the armament isn’t quite correct since no Boarding Shotgun Mobile Brigada exists yet. In fact this is the only Mobile Brigada sculpt out there so you can also legally use it as the combi or HMG version if you like. Don’t get too used to it. New armament options will likely appear quite soon. The biggest danger to this guy are hacking attacks which will succeed easily against his BTS 3. There is a version you can take with a tinbot to drastically up his BTS, but I don’t think it’s worth bothering since it costs half an SWC and you’ll need a model to represent the tinbot. Although a counter will probably be enough to placate most.

The Spektr is going to be a lot of fun. The big deal with this guy is the TO (Thermo Optic) Camo. He deploys as a marker so your opponent doesn’t even know what he is. And even once you reveal him or they spot him, anyone trying to shoot him still suffers a -6 penalty – unless they have a Multispectral visor or catch you under a template.  This penalty of course, stacks with cover and anything else. He also has Infiltration so he can start right up there in your business, and multi terrain so he’s harder to slow down. He’s the perfect model to slink around to the backfield where your opponent’s firing corridors are more favorable. Go nuts and take down their cheerleaders. Like the Alguaciles, you can pay a little extra to make this guy a forward observer. And like with the Mobile Brigada, you can consider taking this guy with a Boarding Shotgun rather than the combi since no Shotgun versions exist yet. Regardless of which version you choose, this guy has mines. Since he has infiltration he’ll be in a key position to place them starting turn 1. And once you start to develop an appreciation for how useful this guy is, you may find yourself picking up the Hacker and Sniper versions as well.

And speaking of Snipers, that brings us to the Grenzer. So… those Multi Spectral Visors I just mentioned? The ones that help you against models with TO Camo? He has one of those. Unfortunately it’s the lowest level so it only reduces the penalty to shoot at Camo models by 3. It doesn’t give him any help discovering markers. In terms of other good news, his arm of 3 is decent and will offer some protection for when someone inevitably shoots back at him. Unfortunately his BS is hardly stellar but still not bad at a 13. 13 is where it starts to get good. Most of the things you’ll be shooting at in this game will be in cover at a -3 to hit. Assuming no modifiers for your range band a BS 13 model will need a 10 or less to hit them; in other words a 50/50 shot. Fortunately this guy’s sniper rifle has a nice big green range band with a +3 mod from 16 to 48 inches. As long as you don’t let the other guys get too close you should be golden.

That just leaves the lovely exclusive Reverend Healer who you’ll only find in Icestorm. As doctors go she is quite costly – more than twice what the more generic Daktari will cost you. But she can actually fight if she has to given that she has BS 13 just like the last guy. And if she gets in close she can also turn to her nanopulser which uses a direct teardrop template and doesn’t require a roll to hit. It works against a model’s BTS value rather than their ARM so it might be useful against some models the rest of your army will have trouble with. The Brigada from earlier is a good example of a model who’s BTS is lower than it’s ARM. But I digress. The real point of this model is that she is a doctor. Her WIP score of 14 makes her a pretty good doctor. And since she is an actual doctor rather than just a paramedic you can re-roll a failed roll with a command check. With CH Mimietism she’s more likely to survive to make it to her patients, although it still wouldn’t hurt to buy some zondbots at some point to really make sure she is out of harms way. TBH as cool as her sculpt is, her rules strike me as the least exciting of the bunch. What’s most intriguing to me is that she can be the fifth model in a Reverend Moira link team – if you want to branch out into a Bakunin sectorial. Of course I started playing Infinity with Bakunin so I already have all the Moiras. Still… without the Optical disruptor she will be the easiest target in the link. But she is good to have around if you find yourself with points to spare and want to splurge on a better doctor. If you get innoculation as one of your hidden objectives you may find yourself glad to have a doctor with CH Mimetism.

Finally, if you find yourself wanting to expand your Nomads Army into a specific sectorial, these guys are mostly from Corregidor. The Alguaciles and the Brigada are both part of that sectorial. The Reverend Healer is the only one who will work for Bakunin. The others are generic Nomads only, although this could theoretically change with the anticipated Tunguska sectorial. Generic and sectorials both have their benefits. Generic allows you access to all Nomads while Sectorials allow fireteams and let you include more of certain types of models. With the massive catalog Corvus Belli has for Infinity I’ve found that sticking to a certain sectorial can help keep things a little easier for the new player.

~Hope you guys enjoyed the article. I’ll admit I haven’t been playing Nomads in N3. I’ve been running the other half of the box. Did I miss anything I shouldn’t have?