Skarbrand is Coming Next Week!

The angry dude with busted wings is on the way! Come read the latest.

The first reports of next week’s White Dwarf and it looks like the earlier rumors from this week are panning out.

via an anonymous reader on Faeit 9-18-2015
Next week’s White Dwarf contains rules for both the Age of Sigmar and 40k!

40k Rules-
Skarbrand is a HQ MC with a BS and WS of 10, S and T of 6 and 5 wounds with a 3+ sv
Bellow of Endless Fury S5 template no ap
Gives Range and Hatred to all units friend or foe within 12″
Two axes that are AP2 each. One has Fleshbane, the other Armourbane.
Just over 200ptsAoS Rules
Move 8, save 4+ 14 wounds
Two axes that hit on 4+ with a 3+ to wound
His Rage get stronger the more wounds he has suffered, giving him additional abilities and weapon attacks. Abilities include greater number of attacks, re-rolls for charge, to hit, all failed rolls, and wound rolls. The more wounds he has suffered the more of these abilities he can take.

Learn More of Skarbrand the Exile 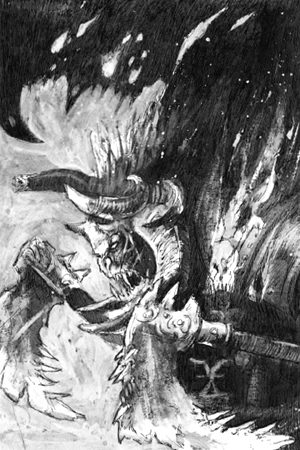 ~Blood for the Blood God!