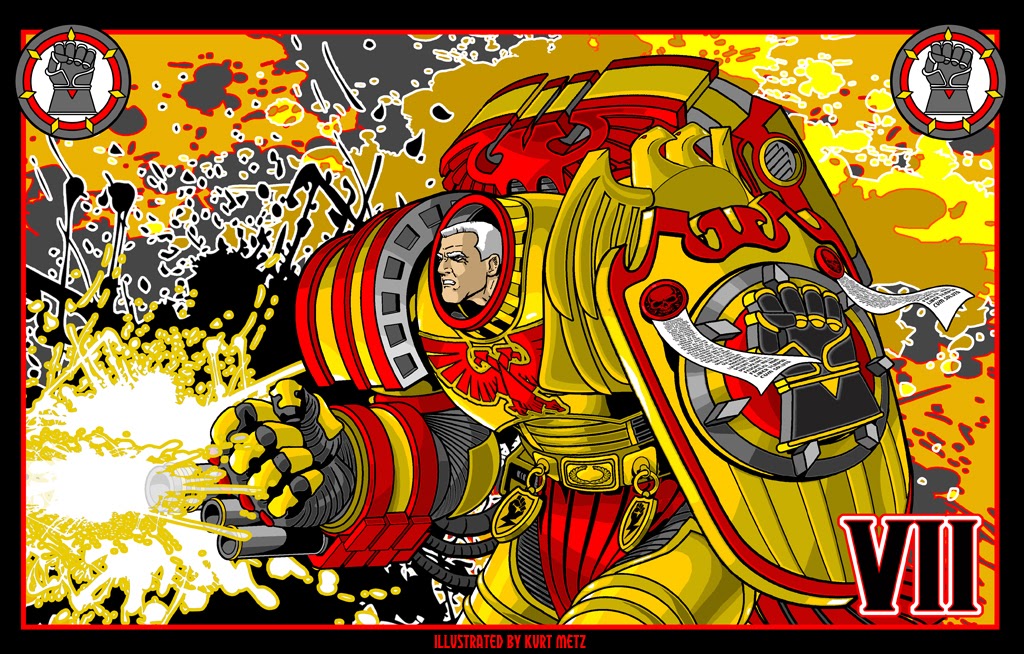 Today we delve deep into one of the most loyal and stubborn sons of the Emperor – the Primarch Rogal Dorn.

Rogal Dorn was the Primarch of the Imperial Fists Space Marine Legion. He was one of the twenty Primarchs created by the Emperor in the earliest days of the Imperium, just after the end of the Age of Strife. Dorn, like the other Primarchs, was randomly transported across the galaxy by the Gods of Chaos and placed on a far-away world in an attempt to prevent the coming of the Age of the Imperium.

Very little is known about Rogal Dorn’s youth. It is believed that that he was raised on the planet of Inwit in the system of the same name by an ice-caste native to the Ice Hives of the world. The patriarch of the clan that raised him became as a grandfather to him, and taught him much of tactics. Even after he discovered he was not blood-related to his ‘grandfather’ Dorn held his memory in high value; he kept a fur-edged robe that had belonged to the man and slept with it on his bed every night. Eventually Rogal Dorn became the leader not only of his caste but of the whole world and then the surrounding region of space, ruling the Inwit Cluster as Emperor of the House of Dorn. But as the history goes, 40 years after his grandfather’s death, the Great Crusade reached the Ice Hives of Inwit. Dorn greeted the Emperor at the helm of his enormous starship, the Phalanx, the seventh Primarch to be found. The Emperor welcomed Dorn, and returned the Phalanx to his care, making it the Fortress Monastery of the Imperial Fists

Dorn himself was fiercely loyal to the Emperor, and never once sought any favour from him. He exemplified the truth, and could never tell a lie, even if it would have aided his cause. Because of this, Dorn’s statue stands as one of four on Macragge, next to that of Roboute Guilliman, Primarch of the Ultramarines.

Dorn commanded his Legion and Expeditionary Fleets with peerless devotion and military genius. It was said that he possessed perhaps the finest military mind of the Primarchs, as ordered and disciplined as Roboute Guilliman‘s and as courageous as Lion El’Jonson‘s, but still inclined to the flashes of zeal and inspiration which marked the successes of Leman Russ and Jaghatai Khan. Indeed, the Warmaster had said that he esteemed Dorn and the Imperial Fists so highly that he reckoned if the Fists, noted masters of defence, were to hold a fortress against him and his Luna Wolves, the resultant conflict would result in a never-ending stalemate.

Commonly dressed in armour of burnished copper and gold, Dorn also wore a red velvet cloak and unfurled eagle-wing motif. It was heavily present on most parts of his gear, most notably on a decorative section of his armour that rose above his shoulders. He had a stern and naturally unsmiling face, topped with an unruly shock of short, bone-white hair.

When the Emperor returned to Terra to build a capital worthy of ruling a million planets, Dorn went as well. Always having excelled in the construction of fortresses, he was tasked with designing the defences for the Imperial Palace. These would prove to be magnificent, and would be well tested in the following years. Fulgrim once asked if Rogal Dorn thought it could withstand the Iron Warriors legion, and Dorn’s truthful answer infuriated Perturabo to such a degree they would almost destroy each other in battle years later. Later, upon reflection, Dorn considered his overly competitive relationship with Perturabo to have demonstrated personal weakness, presumably including the exchange which resulted in Perturabo’s outburst.

Dorn also clashed with his brother Konrad Curze. Having been informed by Fulgrim of Curze’s vision of what would eventually become the Horus Heresy, Dorn kept this secret from his brother until they were on a joint mission. Curze was so enraged by this revelation that he attacked his brother and slashed his face with his Lightning Claws. Dorn would have died if not for his endurance as a Primarch.

In the aftermath of the Ullanor Crusade Dorn and the entire Imperial Fists Legion were recalled to Terra to take up guard stations there as the Emperor worked on his new project.

Before the Imperial Fists could arrive at Terra in full complement, the events of the Horus Heresy overtook them. Stranded for some considerable time by severe Warp storms, the Imperial Fist fleet eventually discovered the badly damaged Death Guard frigate Eisenstein, and so learned of Horus‘ betrayal. At first unwilling to believe it, Rogal Dorn was eventually convinced by several members of the Eisensteinsurvivors, notably Captain Nathaniel Garro and remembrancer Mersadie Oliton, that his brother Horus was staging a full-scale rebellion. Dorn therefore despatched the bulk of his Legion to the Isstvan III system on a war-footing. He himself returned to Terra with his veteran companies to bring word of the events personally.

Dorn was subsequently charged with bolstering the defences of the Imperial Palace even further, and oversaw the construction himself. He felt he was marring the perfection and beauty of the existing structure in doing this, and regretted it, even though it was necessary. Later, Dorn was charged with the overall command of the defenses of the Imperial Palace during the Battle of Terra, personally commanding the effort from the Sky Fortress. Dorn later joined the Emperor and Sanguinius in the assault on the Vengeful Spirit, Horus’ flagship. Helping bring the bodies of the Emperor and Sanguinius back to Terra, he was among those who received the Emperor’s final instructions before being interred on the Golden Throne.

After the fall of the Emperor, Dorn was stricken with grief. He felt the Emperor’s near demise to be his fault and led his Legion on a crusade of penitence across the Imperium. He was summoned back to Terra when Roboute Guilliman announced the adoption of his Codex Astartes, turning Legions into Chapters. Dorn was initially outraged at this proposal, feeling that the Imperium blamed him (and rightly so, he thought) for the fall of his brother marines. But realizing what damage another internal conflict could do to the fragile peace of the Imperium, Dorn agreed. This was a dark period in Rogal Dorn’s life; he had both failed the Emperor and his legion faltered without the guiding light of the Emperor.

Some controversy exists about the next event in Rogal Dorn’s life. What is clear is that the Imperial Fists could not be as easily divided into chapters as, for example the Ultramarines could. The total commitment to the legion was bred into each marine and many didn’t wish to form their own chapters. Dorn found the answer to this problem in meditation through self-inflicted pain, using a device known as the Pain Glove. The pain-induced vision revealed that his legion had to be redeemed in the eyes of the Emperor, and that the way to salvation was through pain and self-sacrifice.

The ‘collective pain’ needed to cleanse the Chapter was decided by Dorn to be an Iron Warriors’ fortress, the Iron Cage. Perturabo had built the massive fortifications to mock the Imperial Fists, and Dorn led his most die-hard followers in a siege that would last for several weeks. Followers of the Iron Warriors claim that the Imperial Fists suffered a crushing defeat, and that Dorn and his legion would have been wiped out if Perturabo hadn’t prolonged Dorn’s suffering so long that the Ultramarines managed to intervene.

Imperial records indicate otherwise. The Imperial Fists had always been masters of siege craft, and even unprepared and at a disadvantage they fought like lions. Dorn stood as a giant in their midst, his mind clear with purpose after years of doubt and guilt. The Iron Warriors would have had to sacrifice their lives and Primarch to destroy the Imperial Fists, a price they weren’t ready to pay. The arrival of the Ultramarines cut the conflict short and the Iron Warriors fled for the Eye of Terror. The Imperial Fists had suffered staggering losses, but they had proved their loyalty to the Emperor and cleansed themselves of earlier failures.

What remained of the Legion was divided into three Chapters. The most zealous marines formed the Black Templars; the more rational and newly recruited marines the Crimson Fists and the ones most devoted to their Primarch and Legion remained the Imperial Fists. Rogal Dorn spent the next twenty years rebuilding and reforming his chapter according to the standards of the Index Astartes. (There were other chapters, like the Soul Drinkers for instance, though it is unclear when they came into existence.)

Rogal Dorn is missing and presumed dead after attacking the fleet of Abaddon the Despoiler during the 1st Black Crusade with a vastly outnumbered force. Seeing the importance of attacking the enemy fleet while they were still preparing he relied on hit-and-run attacks until his reinforcements could arrive. Dorn went missing on board the Despoiler Class Battleship Sword of Sacrilege after leading a desperate attack on its bridge. Only his hand was recovered which is kept in stasis by his chapter.

Dorn’s skeletal fist is kept within the shrine, the bones intricately engraved with the heraldry of all the Chapter’s previous Masters. Only the Chapter Master has the right to engrave his name upon the bones. Each bone corresponds to former commanders. Left hand, the first metacarpal: Lords Bronwin Abermort, Maximus Thane, Kalman Flodensbog, the first phalanx of the thumb, Ambrosian Spactor, etc.

Learn more of the Imperial Fists

Do you think Dorn is really dead?