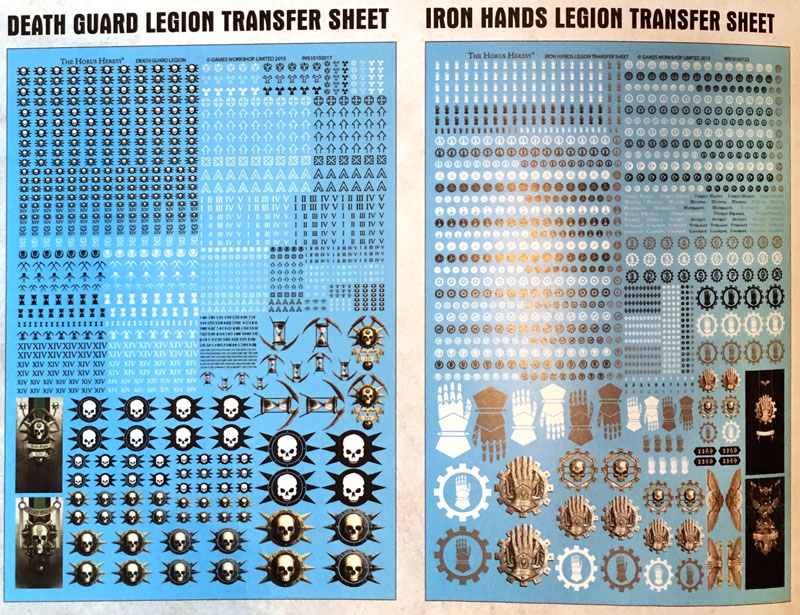 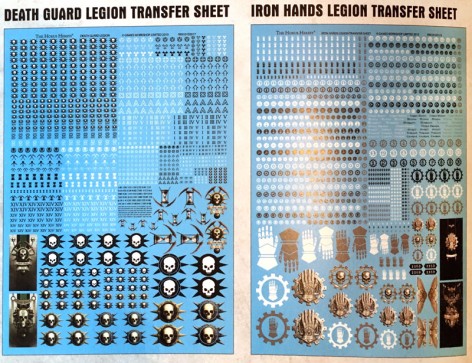 A new set of Forge World Legion Transfer Sheets and Brass Etches are out for Pre-Order NOW – Time to customize your Legion!

We reported on these earlier this week, but Forge World just confirmed the new decal sheets on their website. They are currently up for pre-order. 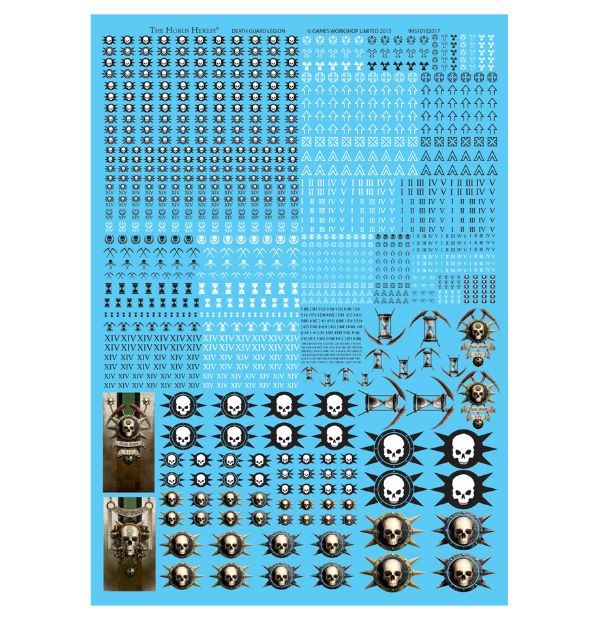 The Death Guard are stalwart and implacable fighters, who have made a speciality both of endurance under the harshest of circumstances and of overcoming the most nightmarish and inhospitable of war zones. Their name is a byword for unflinching determination and victory through bloody, gruelling attrition when all else fails, as well as for expertise in the darker arts of warfare, such as the use of bio-alchem and rad weaponry.

This A4 transfer sheet is full of the many markings of the IVth Legion. Including Legion insignia, squad markings, honour symbols, banners and more, perfect for personalising units of your army. 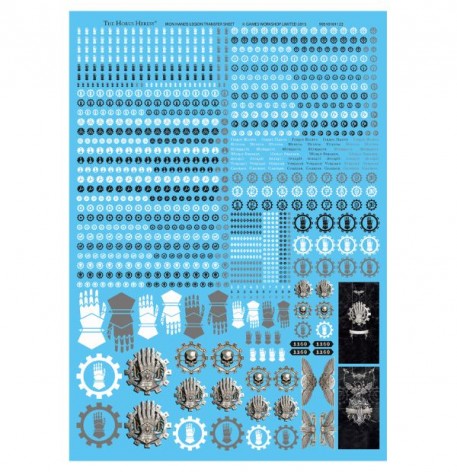 The Iron Hands are masters of the engines of war, wielding weapons and armoured tanks with the skill a master swordsman might a blade. Proud and relentless, the Legion has fought for many years at the forefront of the Great Crusade, and seen victories uncounted, though many have labelled them as callous and as inhuman as the machines they employ with such devastating skill.

This A4 transfer sheet is packed full with the insignia and markings of the Vth Legion. Transfers include Legion insignia, squad markings, honour symbols, banners and more, perfect for personalising units of your army. 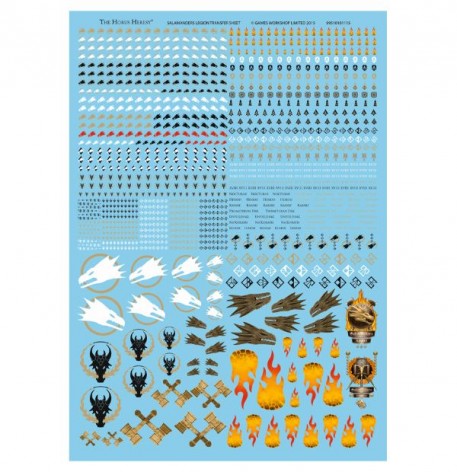 The Salamanders are the exemplars of forge-wrought duty, masters of artifice and possessed of a fearsome and uncompromising sense of honour. The Legion wields the tools of the smith as weapons of war, bringing heat, iron and raw strength of arms to strike down all those who would deny the Imperial Truth or attempt to undermine the Imperium of Man.

Filled with Legion insignia and squad markings, this A4 sheet is packed with transfers for your Legion. Also included are banners, honour symbols and more. 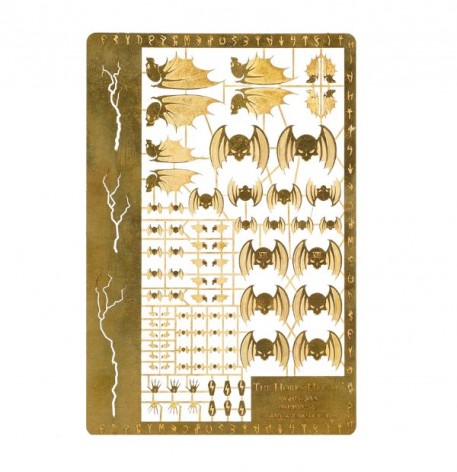 Merciless in their assaults on their former brothers, the Space Marines of the Night Lords Legion were quick to accept their role as traitors. Long considered renegade in all but name, their fall was the fastest and least surprising.

This 80mm by 120mm sheet of etched brass includes the icons of the Night Lords Legions, excellent for adding details to vehicles, infantry and fortifications. The sheet also features stencils than can be used to add lightning bolts to war machines and armour, the perfect finishing touch to Night Lords units. 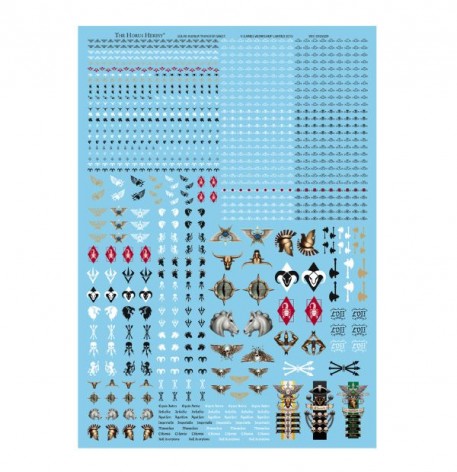 Supporting the Legiones Astartes from the earliest days of the Great Crusade, the Solar Auxilia are the elite of the Imperial Army. Raised on hundreds of worlds but all trained and equipped to the highest standards, many thousands of regiments and cohorts of Solar Auxilia exist, each bearing their own colours and insignia.

This A4 transfer sheet contains over a thousand individual transfers depicting the iconography of the Solar Auxilia and the regiments raised on several different worlds. It includes Auxilia Aquila, squad markings, regiment insignia and banners, all printed in amazing detail. 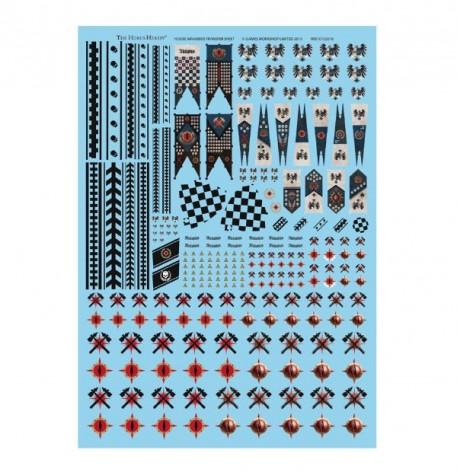 The warriors of House Makabius were ever at the forefront of battles, eager to prove their courage and determined to forge a greater destiny for themselves. The grim determination in the face of impossible odds that was their hallmark was instrumental in the success of many Imperial campaigns in the northernmost regions of the Imperium, and yet this same determination and implacable desire for greatness was also to see those conquests broken and laid to ruin.

This A4 transfer sheet is packed with two hundred and twenty five highly detailed transfers. It includes house insignia; banners and pennants in multiple shapes and sizes; marking for pauldrons; hazard symbols; armour plate edging and more, all printed in amazing detail.

These new full color decals from Forge World are some of the best ones we’ve seen yet – we’ve come a LONG way from the early decal days… They have been teasing them for a few weeks now so it’s cool to see the full sheets. These super high detail sheets really do take your forces to the next step – as long as you do them correctly!