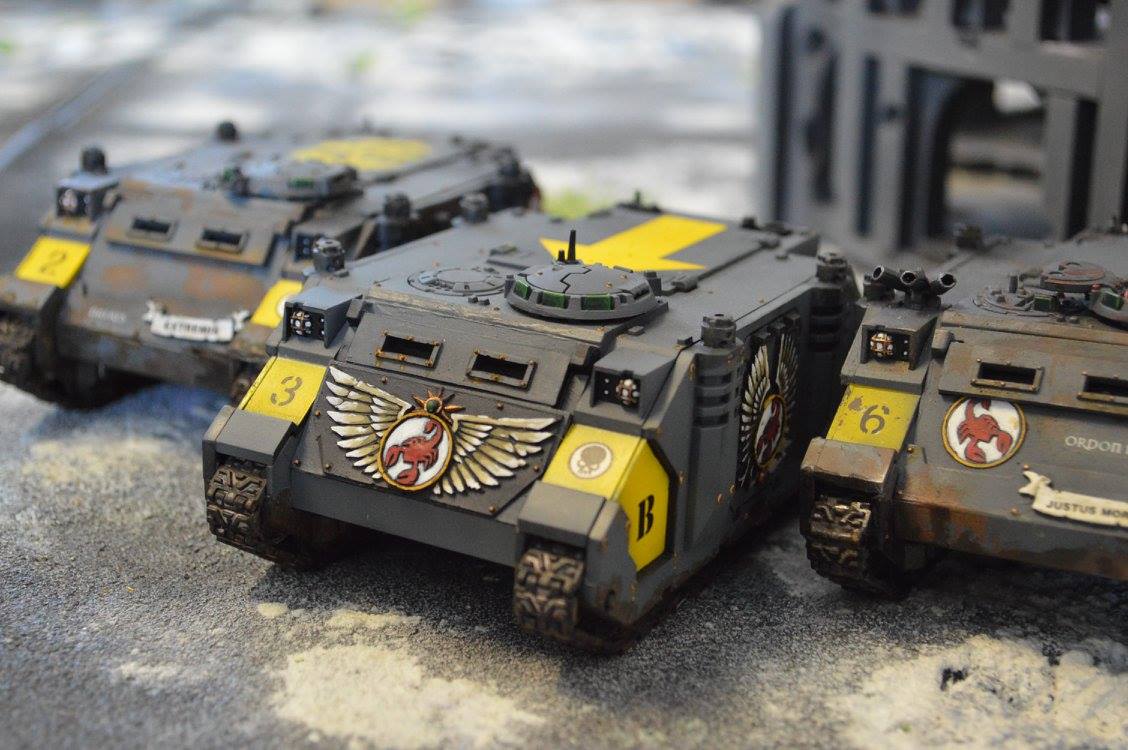 Part One can be found here.

The Murder of Sagan

This is a mission from the Forge World Imperial Armour Badab War books. Due to the models we had available in our collections to play the report the SN Team decided to reverse the roles played by Secessionists and Loyalists, this kind of works in the fluff as Sagan was a world that was highly fought over and the tide of war there ebbed and flowed in both directions. So with apologies to Forge World-

“The Loyalist counter invasion of Sagan was a turning point of the Badab War, and the battle to wrest control of the Administratum tithe world was particularly savage. Forced into unthinkable measures to ensure victory the Loyalists resorted to using forbidden weapons in an effort to force the Secessionists off the surface. The Secessionists discovering the plan organised a last-ditch defence blocking the path of the transports carrying the weapons knowing that they must hold the line at all costs even at the price of their own lives.”

Forces
The Secessionists have 1500pts.
The Loyalists have 2000pts plus 4 modified Rhinos.

The Loyalists task in this mission is to detonate their virus and toxin bomb carrying rhinos in the secessionist deployment area. If they succeed in detonating 4 rhinos they score a victory, if they are prevented from doing this the Secessionists have won. There are no other victory conditions.

Deployment is along the short edges with 1/3 of the table being each deployment zone (24”).

Secessionist player deploys first and there is a roll off for first turn. Reserves may be used.

Weapons of mass destruction – The Loyalist player has 4 additional Rhinos which are fitted out with self-destruct devices attached to viral and toxin canisters concealed within. They are treated as normal Rhinos with no upgrades except they have no transport capability. They are indistinguishable from other rhinos (note in this game Kevin noted which 4 of the 6 (the Razorback was used as a Razorback) had bombs and made the information available to Steven when either they deployed troops or detonated!).

Detonation occurs in the Loyalist shooting phase. The Rhino is removed from play and everything within 2d6″ receives a wound on a 3+ AP4. When a bomb Rhino is destroyed a new one enters from reserves.

So we are finally back! (Did you miss us?) The past couple of months have been rather stressful what with organising the awesome ‘No Retreat’ Tournament (make sure you check out the pictures!) but now here we are where we really belong and doing what we love the most. Playing narrative fluffy 40k, making battle reports and eating pizza! The team got chatting (by the way we have a new SN team member, please welcome Julian) and we decided, due to popular demand, that our first report back should be the continuation of our Badab War campaign , We decided our first report should be one from the Badab War campaign. Kevin and Steven volunteered to play. So off we went to the Studio and set up this beautiful table to play on, a great ruined city block to play Murder of Sagan. Let’s roll some dice!

Both Kevin and Steven were really eager to start and it was a quick setup for both players. Steven deployed first due to the mission rules. (remember the roles for the mission have been reversed). He started by placing his 20 man marine squad and captain right in the middle setting out a sight to behold. “Come at us bros!”

Steven then places his big guns in key positions. Such awesome looking tanks. Kevin was a bit worried at this stage as he had relatively little anti tank in his list that would be able to penetrate AV 14 effectively.

Steven then deployed his Ordnance Battery right in the corner of the board already pointing his guns towards Kevin… literally! Nice FW model.

Kevin’s turn and yes he is still worried. He first places his razorback just beside the devastator squad who have deployed in a perfect location inside the ruined fountain with great line of sight on the enemy and a 4+ cover save. Their krak missiles could be the key in taking out the enemy tanks and drawing fire. The razorback also sports twin linked las cannons so even though it is not a bomb (and as it is a razorback Steven knows this) it’s position up front and with a big gun may draw fire away from the bomb rhinos. At least that was Kevin’s plan…

Kevin deploys his tough command squad on the left flank with his “cookie cutter chapter master on a bike with shield eternal and artificer armour” giving Steven an instant headache! Steven hates this guy and his mates! Why you ask? because Steven has never killed this unit before even though he has tried and tried. Kevin promised Steven he would paint up a different HQ soon for this army… his fingers may have been crossed when he made the promise… Kevin then deploys all his Rhinos as close to the deployment edge as possible, starts their engines, cranks up their stereos and revs them up ready to race forward and rhino rush just like it’s 3rd edition all over again!

and last but definitely not least… a tactical squad starts footslogging behind the fountain and a techmarine with a thunderfire cannon deploys at the top of a fortified ruin in the back of his lines making good use of his 60″ barrage range. Hmm… how did that get up there?

again following the mission rules there is a roll off for first turn and guess who won… GO SCORPIONS!

Turn 1 (Loyalists) Kevin starts his movement phase by moving his bikes and tanks forward as far as possible… quite a jam.

Turn 1 (Loyalists) ….awesome sight! He also moves his disembarked walking unit just behind one of the rhinos to get some cover. The devastators stay still.

Turn 1 (Loyalists) After moving most of his army he starts his shooting phase with a deadly accurate orbital bombardment from the chapter master striking the big Marine squad and killing 6… ouch that hurt! We think this mat be one of the first times Kevin has actually remembered to use this attack. Steven kind of wishes he would have forgotten about it as usual…

Turn 1 (Loyalists) The Bike squad then fires the rest of their weapons at the unit but some great saving throws by Steven sees no further casualties inflicted.

Turn 1 (Loyalists) Kevin then moves on to his second shooting unit using his Thunderfire cannon to target the flanking marine squad on the left just in front of the Dreadnought killing 4 more Marines. The thin blue (and grey) line is even thinner already and those rhinos look mighty close…

Turn 1 (Loyalists) The perfectly positioned devastator squad targets the dreadnought behind the just wounded Marine squad. Unlucky for Kevin only two missiles manage to hit but that is enough as they leave the dreadnought with one hull point remaining and no twin linked lascannon. Result!

Turn 1 (Loyalists) Great shot of how Kevin’s army has moved up and look to complete their mission. This is looking epic! What can Steven do to stop this gorgeous advance? Could this be the shortest game of 40k in SN history?

Turn 1 (Secessionists) Steven is hyped and after some trash talking best suited to 1980’s TV wrestling shows he starts his turn shrugging off the brutal fire power that his men have received. His first move is to advance his badly damaged Venerable Dreadnought closer to the upcoming tanks.

Turn 1 (Secessionists) HOLD THE LINE! Steven’s Captain orders his men to stand their ground after only moving a couple of inches to stand in a long line and prevent the rhinos from crossing into his deployment zone. The plan is that they, with the combined firepower of some special weapons in there, should do the trick and slow those incoming Red Scorpion tanks. Hell Rhinos are rubbish… aren’t they?

Turn 1 (Secessionists) Let the big guns roll Steven fires at the incoming loyalist scum. Wait is that right this changing the mission is confusing, are the Red Scorpions still loyalist scum if they are the ones with the virus bombs? Why did we change this again? I have a headache! Well anyway Steven fires a battle cannon from the Leman Russ under the bridge at the closest rhino. Some skilful placement by Kevin sees Steven only being able to target one tank with the blast and which only managers to glance the rhino and just remove a hull point from it. (The rest of the Russ’ weapons fire needed 6s to hit due to the Battle Cannon’s powerful ordnance rule.)

Turn 1 (Secessionists) The Second Leman Russ fires at other Rhinos this time hitting two (Steven winks at Kevin saying “got you this time!”). The deadly blast blows up the front tank’s Storm Bolter but fails to damage the rear one.

Turn 1 (Secessionists) Another big gun fires….These guns just don’t tire This targets the approaching command bike squad hitting and wounding the Chapter Master 3 times! Kevin opts not to look out sir and fails one of his 3+ invulnerable saves leaving his Warlord wounded. Steven cheers but was he right to focus on that squad and not a Rhino or 2?

Turn 1 (Secessionists) The Captain’s squad ready their weapons and fire all they have (including plasma and grav) at the second rhino removing 2 hulls points and shaking the tank. Not bad.

Turn 1 (Secessionists) We just had to take this picture to show the true beauty of this battle with this view of the Leman Russ tank tracking the Red Scorpions approach!

Turn 1 (Secessionists) The flanking marine squad fires its grav gun at the closest Rhino and manages to immobilise it with a perfect shot. (Will this tank be one of the tanks trying to accomplish the mission? Steven hopes so!)