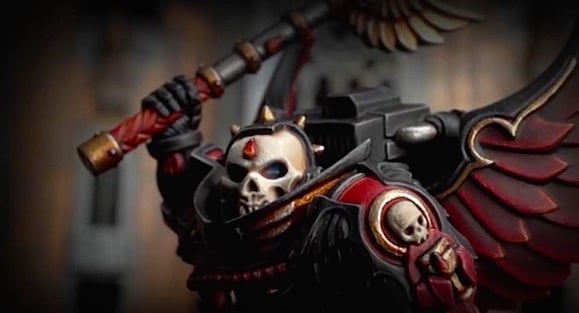 Chaplains guard the spiritual purity of their brothers, but themselves come from the darkest or origins. Read on Loremaster:

Space Marine Chaplains are the spiritual leaders of Space Marine Chapters. Warrior-priests, they fight alongside their battle-brothers, chanting the Chapter’s sacred battle creeds, and inspiring their brethren to greater feats of bravery. To enemies they appear as terrifying and sinister figures in black power armour and skull-visaged helmets.

Each Chapter has its own unique cult, which is often thousands of years old. As these cults often predate the rise of the Ecclesiarchy, the Chapter cults are not simply facets of the common Imperial Cult. While the Ecclesiarchy and its lay followers worship the Emperor of Mankind as a deity, several Chapter cults regard him as merely a brilliant and inspirational man, though with scarcely less reverence. As in all things, this view of the Emperor’s divinity, or lack thereof, varies from Chapter to Chapter. The chapter’s own Primarch is also a major part of the Chapter’s specific cult, revered as much as the Emperor.

A formal sign of entente between the Ecclesiarchy and the Space Marines is the rosarius, a holy symbol, taking the form of a necklace, amulet or brooch which often displays the Imperial Eagle or the Crux Terminatus, or other shapes to suit the particular devotional qualities of the Chapter concerned (for example, the Space Wolves and their wolf iconography). Gifted to Space Marine Chaplains by the Ecclesiarchy, this blessing represents the brotherhood of the Imperial Faith and formally marks the continuance of religious concord between the two groups. In practice, though, the link between the organisations remains rather tenuous.

During the Great Crusade, the Emperor specifically outlawed religious worship of any kind, but several Space Marine Legions still employed spiritual advisors of some kind. The first known Space Marines who bore a resemblance to Chaplains were members of the XVIIth Legion, known as the Imperial Heralds. The Legion’s ‘heralds’ wore black armour with a skull-faced helmet and a winged mace and delivered the Emperor’s ultimatum to new worlds: submission or destruction.  After the PrimarchLorgar joined the XVIIth, renaming them the Word Bearers, he created a role for spiritual advisors, referring to them as ‘Chaplains’, who were assigned to minister to their brothers’ psychological needs. Like the heralds, these Chaplains carried a skull-faced helmet and a winged mace but initially wore the same colours as other Word Bearer Legionaries, repainting their armour black in remembrance of the ashes of Monarchia.

Similar positions also existed in other Legions, such as the Blood Angels Wardens, who served as the watchmen of the Blood Angels, serving as mentors and guides for the younger members of the Blood Angels, but also charged with upholding the laws of the IX Legion. These duties were varied, from offering a Captain advice on tactical doctrine, to leading a ceremony of remembrance for fallen Space Marines. Wardens also wore all-black armour and carried the Crozius Arcanum as a weapon. The Salamanders also had a body of chosen Legionaries who carried out the direct promulgation of the doctrines of Vulkan, shaped by the culture of Nocturne, called the ‘Voices of Fire’. The Iron Hands‘ role of Iron Father, which combines the position of Chaplain and Techmarine was brought into the legion from an order of engineer-mystics who maintained Dark Age of Technology machinery on Medusa, following the re-discovery of Ferrus Manus.

After the Decree of Nikaea, Lorgar offered his Chaplains’ services to the other Legions. These Chaplains travelled among the Legions to counsel former Librarians who felt uncomfortable at the loss of their psychic role, and ease them back into duty as ordinary Battle-Brothers. Many Primarchs accepted Lorgar’s offer, the use of Chaplains spread to legions such as the Dark Angels, Emperor’s Children, World Eaters, and the Death Guard. Other Primarchs such as Sanguinius declined, the duties being given to the already existing Wardens.

Following the Horus Heresy, the position of Chaplain continued in both Loyalist and Traitor Legions, those in the Traitor Legions becoming known as Dark Apostles.

Chaplains are the most well-versed in the knowledge of the Chapter’s cult. This knowledge is put to practical use as Chaplains are responsible for the spiritual health, discipline and faith of the Chapter brethren. The bond between Marines and their Chaplains is a strong one. Chaplains are present in a Marine’s life from the moment he is chosen as a neophyte, presiding over their indoctrination as they progress toward becoming full battle-brothers.

Within a Chapter’s fortress-monastery is the Reclusiam, a large chamber devoted to cult activities, and where the Chapter’s holy relics and, sometimes, the body of its Primarch, are housed. The Chaplains lead their sermons from here, and rouse the Marines in their love of the Emperor. The Battle Barges and ships of the Chapter’s fleet also include huge cathedrals in the heart of each ship, allowing the Space Marines to pray while away from the fortress. Chaplains always lead the Space Marines in prayer, but a Chaplain is not always needed for a Marine to pray.

Each Space Marine Company has its own Chaplain. At the headquarters level of the Chapter organization are Chaplains holding the ranks of Reclusiarch and Master of Sanctity, whose responsibilities extend to the Chapter as a whole. 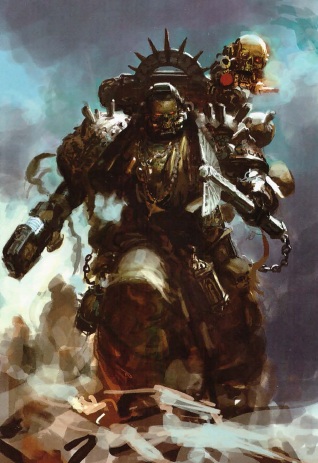 The power armour suits worn by Chaplains are considered holy in themselves. Often they are hundreds, if not thousands, of years old. A Chaplain’s armour is highly stylised and archaic in appearance. Black is the colour associated with Chaplains, and most or all of their armour is painted in this colour. Symbols such as skulls and Imperial eagles commonly adorn the armour, but Chapter-specific symbols are also used. The face plate or the entire helmet is traditionally skull-shaped. Skulls are also repeated throughout a Chaplain’s armour – adorning an entire shoulder plate, the upper chest armour or the groin guard. One area of the armour, such as a shoulder guard, is always left in the Chapter colours, displaying the Chapter symbol. Part of the Chaplain’s formal regalia is the Crozius Arcanum, the Chaplain’s staff of office. Used in chapter ceremonies and worship, many Chaplains take them into battle, symbolizing that battle is the highest ritual of the Chapter. The crozius is usually topped with an Imperial Eagle or winged skull. It incorporates a potent energy field, allowing it to be used as a weapon; one that will punch through armour easily, showing the power of faith.

The Rosarius that Chaplains wear around their neck incorporates a powerful force field generator, offering the bearer protection against weapons that even power armour would offer no hope of survival against. In light of this, the rosarius is sometimes referred to as a Chaplain’s “soul armour.”

Learn More of the Famed Chaplains of the Imperium

~Knowledge is power – hide it well