Today we delve deep into the dreaded Tau Manta – one of the mightiest Xenos aerial vehicles yet encountered.

The Manta Missile Destroyer, also known simply as the Manta, is a super-heavy vessel used by the Tau Empire for the transportation of whole Hunter Cadres. A rank of Kor’ui is sufficient to pilot one.  On the borderline between an Attack Craft and a full starship, these small spacecraft are useful in a variety of roles. In space they are used to attack enemy starships and are a match for entire squadrons of Imperial starfighters, while during planetary assaults they function as drop ships and heavy fire support for Tau ground forces. Alongside Ballistic Suits they are the Tau’s nearest equivalent to an Imperial Titan or Ork Gargant.

Manta Missile Destroyers played a pivotal role during the Damocles Crusade, the Imperium’s first organized military response to the Tau Empire. In the first space battle for control of the Hydass system, these craft were used to counter waves of Imperial bomber formations which threatened the Tau capital ships. During the height of the battle for Dal’yth, Imperial forces advanced on the city of Gel’bryn in a three-prong attack, one of which was led by the Titans of Legio Thanataris. Only a counter-attack force composed of Mantas proved capable of halting their advance, resulting in a stalemate on the ground and eventual Imperial withdrawal from Tau space.

Manta deployed during the Taros War

On Taros Mantas were used extensively to reposition Hunter Cadres during the battle against Imperial forces, allowing them to counterattack their advances and quickly retreat in the face of overwhelming force. This gave the Tau superior strategic mobility and allowed their outnumbered forces to match the Imperial Guard on equal terms for local battles.

The primary armament of the Manta are two Heavy Railguns located in each wing, massive weapons which together can destroy an unshielded Warhound Scout Titan in a single hit. Besides the standard round these Railguns can also fire special sub-munitions which are given a Drone-level intelligence to direct the shell to its target. While useful in a ground-support role, these sub-munitions are primarily used in space combat, where their lack of penetration is made up for by the ability to target the weak points in enemy starship armour. Both rounds are fin-stabilised for additional lift in an atmosphere, giving them greater range than normal.

For short-range engagements the Manta is equipped with six long-barreled Ion Cannons grouped in batteries of three in each wing, which provide for saturation fire when in the thick of battle. Sixteen long-barreled Drone-controlled Burst Cannon turrets provide close defense during landings and anti-aircraft fire during flight, and are positioned at points all around the Manta’s hull so that all firing arcs can be covered by multiple cannons. Finally the ten Seeker Missiles loaded in prow-mounted launch ports can be fired by the crew by their on-board Networked Markerlight or by Markerlight operators on the ground, along with twin-linked Missile Pods. 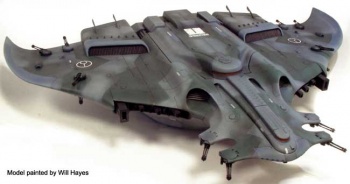 Control of this immense weaponry is assisted by a Targeting Array for superior accuracy and Blacksun Filter for nighttime operations.

As with all Tau air and spacecraft, the Manta Missile Destroyer is crewed by members of the Air Caste, who command the ship from a forward cockpit located in its head. In addition there is also a sophisticated command bridge just behind the cockpit and connected by an access ladder which functions as a communications hub, fire control and forward command post. It is from the command bridge that a Tau Commander or Ethereal can safely oversee battle operations.

In addition to its reinforced armouring, the Manta is also protected by an energy shield akin to the deflector shields found on Tau capital ships. Additional countermeasures come in the form of Decoy Launchers mounted near the ship’s vulnerable engine thruster arrays. Should the craft be seriously damage the crew can use an on-board escape pod to avoid danger.

The Manta Missile Destroyer is actually equipped with an etherdrive, making it the smallest interstellar-capable spacecraft in Tau service, but this capability is severely limited. For all but the shortest hops along the edge of Warp space, the Manta must still be transported inside larger carrier ships. The Manta is also capable of hover mode for deployment of troops. However the considerable energy requirements need for operations close to a planet’s surface means the ship loses the capability for fast maneuvering during ground combat.

In their capacity as a heavy dropship, one to two Mantas can transport an entire Hunter Cadre straight into battle. For this purpose each ship has two transport decks, an upper and lower deck. The upper deck, connected to the command bridge by an access ladder, has seating for up to forty-eight Fire Warriors, along with a special command chair for the commander and central rack for six Drones. The space can also be given over to troopers and machines of equivalent size such as Kroot or Gun Drones, or converted to carry up to twelve Heavy Gun Drones or up to twenty-four Kroot Hounds. An extendable ramp allows for access to the upper hold when the Manta is landed, although when deployed from the air troops will be given jet packs or ferried down on gravitic vehicles. 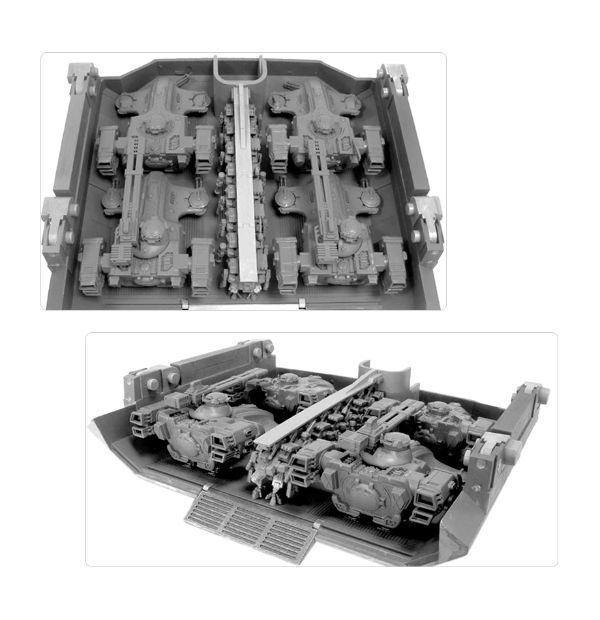 The lower transport deck has a technical capacity of one hundred and forty Fire Warriors or equivalent-sized troops and machines, although a more common load-out is four vehicles, either Devilfish,Hammerheads, Sky Rays or Piranhas, along with a central holding rack for up to ten Crisis Battlesuits or up to five Broadside Battlesuits. Other alternative loads include up to fifty Crisis suits, twenty-five Broadside suits, thirty-six Heavy Gun Drones, twelve Drone Sentry Turrets or twelve Tetras. The entire lower deck also functions as an elevator, which is lowered to allow access.

Despite its role as heavy dropship, Mantas are rarely used to insert troops onto enemy starships; the concept of performing boarding actions in the middle of space combat is considered foreign to Tau tactical doctrine. 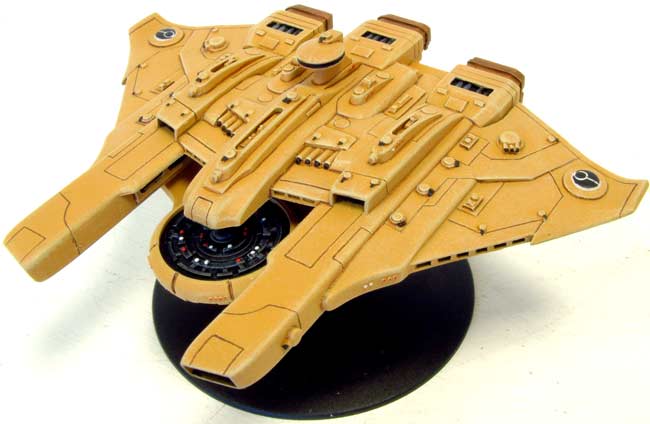