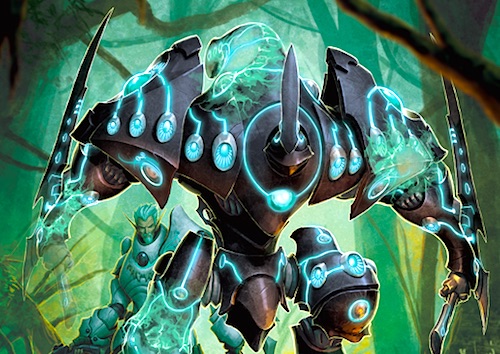 Will Shick talks Retribution of Scyrah in next month’s new edition of Warmachine.

Take it away Will

The heart of the Retribution of Scyrah is its diversity—a unique blend of various Iosan houses, each boasting its own martial tradition. Tenacious and stealthy mage hunters slink forward to spring ambushes on unsuspecting foes, battle mages send their enemies reeling with blasts of arcane force, and gleaming ranks of disciplined Dawnguard and Houseguard march in ordered precision to cut down with bullet and blade all who oppose them. While many of the original core factions slowly developed their own centralized themes over time, the Retribution was specifically conceived as a union between these three very different martial traditions.

When we sat down to review the Retribution of Scyrah, we quickly realized there was little we needed to do to reestablish its core themes. By and large, the core essence of the Retribution had remained strong and distinct throughout the entirety of Mk II. Part of this success, I think, was due to the well-defined roles we established at the outset for each of the main pillars that made up the Retribution. The definition and distinctions between Dawnguard/Houseguard, Mage Hunter, and Battle Mage had guided us in very clear ways during development. Where our work really lay with crafting Retribution for the new editions was in rebalancing and reevaluating the power of each of its models, both internally and externally.

And when talking about balance, there is no better place to begin than with the Mage Hunter Strike Force and the Mage Hunter Commander. As I alluded to in my Legion Insider, when discussing the changes we made to Eyeless Sight, we knew very early on that Phantom Seeker as it existed in Mk II was simply not going to fly in the new editions. Being able to completely ignore LOS every single turn, combined with SPD 6 and RNG 12, simply made the Strike Force so optimal that it threw everything else in the faction out of balance. The only significant limiting factor was their RAT 6, which was still far from sub-par.

In the end, we knew we wanted to preserve the idea of the Mage Hunter Strike Force, well…striking from the shadows against unprepared foes, but at the same time it was absolutely necessary for both the health of the game and the Faction as a whole that we rein in the capabilities of this single unit and its attachment. Thus, after much debate and testing, Phantom Seeker went from being a passive, always-on ability to a once-per-game ability like most other powerful command attachment abilities. This new ability, called Phantom Barrage, allows the unit to ignore cloud effects, forests, and intervening models for one turn when determining LOS. This compromise allowed the Strike Force to keep their defining, out-of-nowhere attack without simply putting them head and shoulders above all other ranged options in the game. Another important change to the Mage Hunter Strike Force had less to do with the Force itself and more to do with an overall change to the core rules for warcaster power fields. During our initial discussions and testing of the battlegroup boxes for the new editions, the power field Overboosting rules became a key focus. The primary issue was twofold. First, in smaller-scale games, the old Overboosting rules—which had each unspent focus point add +1 ARM to the warcaster—meant that in a warcaster-versus-warcaster duel, it was almost guaranteed to remain in a perpetual stalemate, as the smart play was to simply camp on most or all of your focus in order to be nigh-undamagable outside of extreme dice spikes. Second, this system had led to the unintentional situation in which warcasters who were designed to be arcane powerhouses yet physically more vulnerable were, due to their inherently higher focus stat, just as durable as warcasters designed to mix it up on the front lines.

Thankfully, the fix for this came relatively quickly, and I believe it makes for a more dynamic, exciting game while being even truer to WARMACHINE’s resource management roots. Under the new edition rules, unspent focus points on a warcaster no longer add to the warcaster’s ARM. Instead, Overboosting now allows a warcaster to spend up to 1 focus point each time that warcaster takes damage in order to reduce the damage suffered by 5 (to a minimum of 0). With this new system in mind, the Strike Force lost the Arcane Assassin ability (in fact, the ability was completely removed from the game) and instead picked up the Blessed ability on their weapons.

While the changes to the Strike Force were fairly large in scope, in most cases it only took slight tweaks and balances to fully realize the majority of Retribution models in the new editions. Dawnguard Sentinels, for instance, simply gained Vengeance as a standard rule while the Dawnguard Officer picked up Tactics: Relentless Charge and Iron Zeal, cementing the Sentinels as a heavy-armor, front-line assault force.

The Dawnguard Invictors, on the other hand, lost Flank [Faction Warjack] and instead picked up Assault, giving them that elite, multi-threat approach at the core of their design. Overall, the biggest area of tuning for the majority of Retribution models occurred at the point cost level. By and large, the average point cost for most units and models was reduced from the ones they had Mk II. For instance, the Dawnguard Invictors are 10/16 while the Mage Hunter Infiltrators are now a steal at 8/13, the same cost as the stalwart Houseguard Halberdiers. Of course, for those of you who might be lamenting the loss of flanking tactics with your Dawnguard and myrmidons, don’t fret—Dawnlord Vyros himself has you covered. His feat Perfect Execution now grants all warjacks in his battlegroup in his control range—you guessed it—Flank [friendly Faction warrior model]. And while we’re talking about the Dawnlord, he kept Bird’s Eye, though it no longer grants 360° front arcs. And because I’ve seen the question asked multiple times since the new editions launch was announced…yes, Incissar Vyros still has Synergy; however, the bonus to attack and damage rolls now maxes out at +3.

Much like the rest of the Retribution models, the warcasters of the Retribution by and large remain very close to their Mk II counterparts in terms of abilities, spells, and play styles. One of the few more radical changes was to the Faction’s original battlegroup box warcaster Kaelyssa, the Night’s Whisper; however, all the changes were to better realize her role as one of the hot up-and-coming stars among the Retribution’s mage hunters. You can judge for yourself, but I am very happy with where she wound up in the new editions. In addition to point cost adjustments, many iconic Retribution warjacks benefited from the new editions rebalancing with some snazzy new or adjusted rules to better fit their roles on the table. The Chimera not only became significantly cheaper at 8 PC, but it also kept one of my favorite new thematic abilities: Phantasmal Field, which grants it +1 DEF for each focus point it has. Not only does Phantasmal Field fit the fiction surrounding the Chimera, it also adds a really interesting tactical option, as a DEF 15 arc node is nothing to sneeze at.

The Gorgon also got a significant boost, as its ranged attack now inflicts -2 SPD instead of simply preventing the hit model from running or charging. While the new editions allow models to charge even when suffering from a minus to their SPD stat, the change overall in our experience has really made the Gorgon stand out as a solid control piece. Add in being able to hit at P+S 16 (thanks to Combo Strike), and the Gorgon certainly has a place at the low cost of 9 points.

Adeptis Rahn’s personal myrmidon Discordia also got some significant rebalancing in the new editions. There’s so much fun on the card now that showing it is easier than telling you about it. Not to be outdone by his Shyeel rival, Ossyan’s personal warjack Hypnos also got a bit of a makeover for the new editions. Of course, this Insider wouldn’t be complete without a quick overview of the many solos within the Faction as well. Retribution commanders will be happy to know that the deadly Mage Hunter Assassin remains pretty much as she was, still boasting Chain Strike, Weapon Master, and Decapitation for 4PC. The Soulless Escort got a bit of a survivability bump—he now no longer needs to sacrifice himself to protect his unit from spells. Instead, he kept Disbinding, allowing him to remove an enemy upkeep spell from his unit as a special action. He also kept Magic Static, meaning enemy spellcasters will have to be that much closer in order to make the magic happen.

The Dawnguard Destor Thane picked up a great new ability in Leadership [Dawnguard Destors], which grants all Destors in his CMD Unyielding. The Thane’s role was reevaluated a bit, however, as we wanted him to be leading the charge, not acting as a mobile gun platform. As such, he traded in Virtuoso and Multi-Fire on his lance cannon for Quick Work and Reposition [3].

Last but not least, the humble Arcanist remains an incredible support piece for Retribution armies. At just 2PC and FA 3, these guys have Repair [d6], Empower that allows them to feed warjacks additional focus points (even if they already have one or more on them up to the limit of 3), and, of course, Concentrated Power.

~More on Warmachine/Hordes all month…