Bolt Action: Take the Fight to the Rails 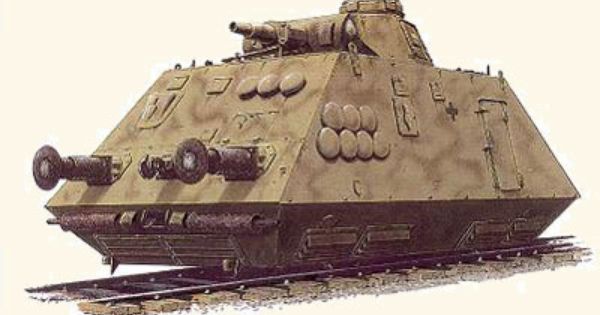 Moving out from platform 1 on the Great S&W network is the 19:43 Train, heading to your battlefields with the armoured might of Germany!

Add some more dimension to your Bolt Action games with these sets – they can be used in a great scenario from Warlord, or as terrain in any battle.

World War II saw the last hurrah for a number of weapon systems first devised in the nineteenth century. One such was the big-gun battleship and another was the armoured train. A 38t on an early war flatbed version.

The first employment of armoured trains seems to have been as an anti-guerrilla vehicle by the Austro-Hungarian Empire in 1848. The first major use of these vehicles was in the American Civil War, again often for security work. They patrolled the rail lines, which were so important for supply. The 38t nestled in an armoured flat bed at the tail of a BP-42 Armoured Train – Note the locomotive sandwiched in the middle.

Heavy armoured gun wagons for use in battle seem to have been first built by General Lee for the Confederate Army. They were copied by the Union Army and various European powers. Gun-wagons took part in the siege of Paris during the FrancoPrussian War. The Royal Navy and Royal Engineers spearheaded further development of this weapon. British armoured trains fought in the Sudan and South Africa. Winston Churchill was famously captured in a Boer commando ambush of a British armoured train. Armoured trains could be found on all fronts and were operationally being used and developed throughout the war.

In World War I conditions on the Western Front were unsuitable for battle-trains, but the same was not true of the large sparsely populated regions of the East. Imperial Russia placed great emphasis on armoured vehicles and had great success with their armoured trains, causing Austro-Hungary and Germany to build their own. The high noon of the armoured train was the Russian Civil War. Russia had few roads in the early twentieth century, as the Panzerwaffe was to discover in 1941, so railways assumed a vital importance. Most civil war battles occurred within a few kilometres of a major railway line. Many vehicles such as captured S35’s, or more commonly the 38t, could be mounted on flatbeds with added armour, to be used as gun platforms from the (normally stationary) train, or as mobile defense when unloaded. There was a second class of combat rail vehicle: the armoured and armed rail-wagon. These were single, self-propelled armoured vehicles, usually armed with at least 4 machine guns, used to patrol railway lines. Often patrolling in pairs, with the infantry wagon leading, the second being a gun wagon. These excelled in their role as anti partisan vehicles (particularly on the lighter gauge rail roads), the gun wagon equipped with a Panzer III N turret providing the artillery support. These sets would not only make fantastic (and great looking) objectives but will allow you to develop full scale scenarios for your Bolt Action games. Full rules for Armoured trains can be found in the Bolt Action supplement Germany Strikes pages 99-102. (StuGIII not included)
Contents include:

Decide on your set:

So if all this armour has got you thinking, what will you choose? We’ve 3 fantastic deals and all the pieces as separate options now available, take a look at these: Tank and Flak Gun not included How would you use these models in your games?